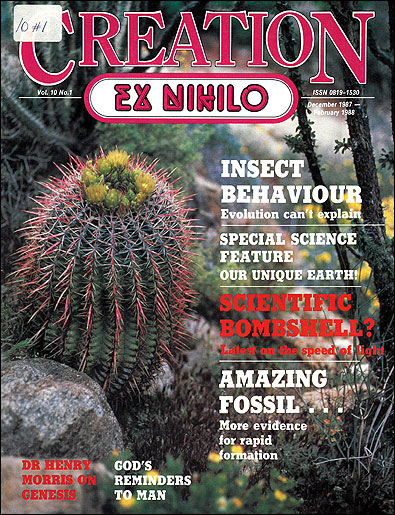 by Jerry Bergman and Robert Doolan

By far the tallest living things are redwood trees. Relatives of the sequoia, they can soar taller than a 36-storey building. Like all trees, redwoods and sequoias continue to grow as long as they are alive. Thus, the longer a tree lives, the taller and wider it becomes.

Except for men who cut them down for timber or earthquakes, fires and lightning—redwoods and sequoias have few enemies. Scientists have researched the redwoods carefully, and have not found even one that has died of old age, sickness, or insect attack. This latter is a common problem of trees. The Dutch elm disease killed and ruined thousands of the beautiful shade trees of many American small towns.

It is significant therefore that no redwood tree has been found older than about 4,000 years. There are, though, many sequoias and redwoods in the 3,000 year-old range. The most famous sequoia tree, ‘General Sherman’, located in the Sequoia National Park in California, is about as high as a 27-storey building. It has been around for something like 4,000 years. To support its height, its immense trunk is so large that 17 men stretching out their arms could just about reach around it. This single tree contains enough wood to construct 100 modern houses.

But as tall and old as many sequoias are, they are not the oldest tree. A bristlecone pine in the White Mountains of California has this honour. It is more than 4,000 years old.

As trees such as the bristlecone pines and the redwoods are still living after 4,000 years or more, and seem impervious to the normal problems of trees, it is conceivable that they could live another 4,000 years or longer—a total of 8,000 years! Why then, are none found much older than 4,000 years?

It would seem that if these trees grew before this time, it would take something like a catastrophic natural disaster to wipe them out. This is seen as strong evidence for Noah’s Flood having occurred a little more than 4,000 years ago.