How creation provides the right framework for our thinking

A while ago we received a letter from the Rev. R.J. He was responding to one of our creation.com web articles which talked about the infamous claim by atheist Richard Dawkins that God is a ‘bully’. He wrote:

I want to express how much I have been blessed by your materials and ministry! My family serves as missionaries in Kenya, and shockingly, have had to fight a huge battle in the local Christian school about creation/evolution, and are still in the middle of that battle. I’m writing to respond to the article on ‘The Goodness of God’ posted today on your site. Very nicely done. May I add one thing to it?

It is impossible, especially for those who do not know the Lord, to have any kind of mental framework in which they can recognize what ‘good’ really is. As fallen people, we are born cut off from knowing the only right and good Being in the universe [God], and therefore, we are also cut off from knowing what is really good. Sinners think sinning is good, and God is bad! Clearly, their thinking is upside down!

So, when God acts out of His nature of goodness, it might look unrecognizable to those of us who do not know what good is, or rather, Who good is. Consider the cross. A horrible, bloody, gruesome spectacle in which God’s supreme goodness and love is displayed. To the disciples on that night, or anyone else watching, it did not look like goodness. Thank God, God did what was right and good anyway!

Isn’t it funny how people, cut off from the only One is really good, still try to draw a distinction between good and evil? I’m sure that Richard Dawkins would happily tell anyone who would listen what he thinks is good, and what he thinks is bad. The Bible says there is a way that seems right to a man, but that way ends in death.

Thank you again for your wonderful ministry!

If we retreat from this area people will naturally gravitate to a worldview they feel can provide answers and the secularists will ‘pick up the slack’.

R.J. is spot on, and has shown yet another reason why the creation issue is so foundational to what every human being thinks about why they are here. Dawkins et al are adept at expressing such moral outrage about God, especially pointing to the Old Testament’s accounts of violence, etc. These ‘new atheists’ are adept at marketing their ideas and they know how to tap into the public’s consciousness, especially by addressing an area in which the church seems devoid of answers.

For example, the death and suffering issue. Whenever major international tragedies strike, like ‘9/11’ or the Haitian earthquake, most people, including many Christians, ask “If God is a God of love, why does He allow all the death and suffering in the world?” And, in our experience, most Christians cannot answer this question when asked by non-believers. A common answer goes something like this: “Well, in the wisdom of God, we don’t know why these things happen, but in Heaven all will be revealed to us.”

This, of course, is a non-answer that does nothing to draw the person closer to a God he/she doesn’t believe in the first place. This is because their framework for understanding the foundational reason for such issues is completely upside down!

At CMI we regularly respond and help Christians to provide answers to such major international tragedies like 9/11, the Indonesian Tsunami in 2004, the devastating Australian bushfires of 2009, or the Haitian earthquake. While there are obviously proximate causes, the underlying foundational reason is that we all live in a fallen, cursed world due to the entrance of sin in what was originally a ‘very good’ world. We have to go back to Genesis to find the answers. But the Christian cannot provide those logical answers if he/she does not accept Genesis as real history. If we retreat from this area people will naturally gravitate to a worldview they feel can provide answers and the secularists will ‘pick up the slack’. The evolutionary worldview would say that death, suffering and bad things are just part of existing in a tough, harsh world where only the fittest survive. Therefore, such tragedies and the loss of loved ones due to diseases or illnesses etc. are just part of this process where life and death ultimately have no meaning and purpose, so why even question it anymore?

Death and suffering all around us serves as a reminder that something is actually wrong with this creation.

But here is an opportunity for the Christian, because ultimately no-one is really ever reconciled with why bad things happen to them, and particularly why there is death—everyone grieves. We can point out that death and suffering all around us serves as a reminder that something is actually wrong with this creation. Because of the real historical events in Genesis the whole creation was cursed (Romans 8:20) and every human is born a sinner. In Romans, the Apostle Paul, because he believed God’s Word as real history, preached that “all have sinned and fall short of the glory of God” Romans 3:23). He also makes it plain in Romans Chapter 8 that this entire creation is groaning under the effects of this Curse, and will be so until it is liberated from its “bondage to decay” (Romans 8:21) when all things will be restored (Acts 3:21) through the lifting of this Genesis Curse (Revelation 22:3).

This means that while both Christians and non-believers live on the same planet and are affected by the Curse, the difference is that the believer has been rescued for eternity from the effects of death that mankind brought upon itself at the beginning. Laying the correct foundation for thinking will help people see that ultimately God is love and He did do something about the death and suffering—He sent Jesus! “For the wages of sin is death, but the gift of God is eternal life through Christ Jesus our Lord” (Romans 6:23).

This is an example of how one can help people think straight in a twisted world. Though it’s sometimes tough to be exposed to the ‘flak’ that comes from it, no matter how we do it, CMI is one of a few ministries today that does not avoid providing the answers to the tough questions, nonetheless. Thank for your support that allows this to happen as we keep the ‘information machinery churning’.

DVD brings tears to eyes and leads to conversions 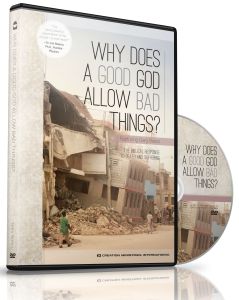 Gary Bates’s recently released DVD Why Does A Good God Allow Bad things has been getting lots of positive feedback. Jim Mason, nuclear physicist and speaker for CMI-Canada described it as the “The most powerful presentation of the Gospel I’ve ever heard.” And recently, a Doug B. wrote to CMI and said,

“This is regarding your DVD ‘Why Does A Good God Allow Bad things?’ I sincerely believe you hit a home run on this one, after watching many DVDs from AIG, ICR, and you guys this one has had the most impact I have ever seen. The first time I previewed it, it brought tears to my eyes. The next week I showed it in adult Sunday School and also had the high school kids watch it with a very positive response. Next I took it to the county jail in [Montana, US]. for the Sunday night service our local prison ministry has brought in for over 25 years. We began by talking about our biggest ‘Why’ questions, some of them only God Himself could have answered. As we watched the DVD I seen heads nodding in agreement, afterward two men said they wanted to make a commitment to accept Jesus! I led them in the sinner’s prayer and assured them they had just made the best decision ever. The other 9 men said they had many of their questions answered. PTL! Keep up the good work, may God bless you all.”