Treasure in the Trinity

Why the Trinity is an asset, not a liability1

It is not uncommon for critics of Christianity to dismiss the tri-unity of God as an irrational concept. The intemperate Robert Ingersoll, for example, once mocked:

“According to the celestial multiplication table, once one is three, and three times one is one, and according to heavenly subtraction if we take two from three, three are left. … Nothing ever was, nothing ever can be more perfectly idiotic and absurd than the dogma of the Trinity.”2

However, far from being a nonsensical notion or a source of confusion, the Trinity is a profound and edifying truth. It is a mind-stretching notion, to be sure. But the idea of a tri-personal God is a perfectly coherent concept that illuminates God’s nature, withstands attacks, and even helps to resolve otherwise intractable biblical and philosophical puzzles.

We can apprehend the concept of the Trinity even if we can’t exhaustively comprehend it.

Christians affirm the Trinity based on the Bible’s teaching—not on later-developed tradition—and Scripture speaks with a clear and consistent voice. The Bible depicts God as a single, unique being, who is simultaneously three distinct and fully divine persons—Father, Son, and Holy Spirit. There is no contradiction in this definition, because God is one and three in different senses. Christians have never taught that three persons are somehow one person, or that three gods are one God. That would be a contradiction.

Rather, God is one essence or substance, yet He has three centers of self-consciousness. It has been said that God is one ‘what’ but three ‘whos’. In the God of Scripture, we have a beautiful balance of unity and diversity.

Aiming at the wrong target

Ignoring these careful distinctions, however, non-Christians frequently misrepresent the Trinity in their attempts to refute it. The Qur’an, for example, warns: “Do not say ‘Three’; … Allah is but one God” (Surah 4:171). This is obviously meant to denounce the Trinity. But the Trinity is not an affirmation of three gods. Christians are monotheists. So when the Qur’an insists that there are no other “deities besides Allah” (Surah 5:116), this is irrelevant. Christians and Muslims agree that there is only one God. What they disagree about is the inner nature of the one true God. Is He one person (Unitarian) or three persons (Trinitarian)?

Once the doctrine of the Trinity is understood properly, it cannot be dismissed so easily. Admittedly, we can’t fully wrap our minds around the Trinity since we are finite creatures trying to understand an infinite God. God is unique (Isaiah 46:5), and nothing else in our experience is parallel to Him.

In fact, the various analogies people have offered tend to illustrate heresies better than they do the actual Trinity. For example, water (one substance) taking three forms (solid, liquid, gas) illustrates the heresy of modalism, because a body of water exists in only one mode at a time and cannot be in all three states simultaneously, whereas God is simultaneously Father, Son, and Spirit.

But why should anyone dismiss the Trinity just because the concept is difficult to illustrate, or even fathom? It is a rational truth, revealed in Scripture, and therefore we can apprehend it even if we can’t exhaustively comprehend it.

Theology is not the only field in which truth can turn out to be more complex than was initially supposed. For instance, when young students first learn about negative numbers, they may struggle to understand how something can be less than zero. If a student begins with a stack of coins and removes them one by one, subtraction is no longer possible after the collection has been reduced to zero. One cannot go any lower! However, once a young person is old enough to get a bank account, negative numbers suddenly begin to make perfect, frustrating sense!4

Similarly, however counterintuitive the Trinity might be, certain scientific truths are equally so. Notice how even atheistic evolutionary biologist Richard Lewontin—an unlikely source of support—actually defends the Trinity against those who would hastily dismiss it as irrational.

“What seems absurd depends on one’s prejudice. Carl Sagan accepts, as I do, the duality of light, which is at the same time wave and particle, but he thinks that the consubstantiality of Father, Son, and Holy Ghost puts the mystery of the Holy Trinity ‘in deep trouble.’ Two’s company, but three’s a crowd.”5

If certain features of this world such as light, subatomic phenomena, and relativistic effects defy our expectations and strain our minds, how much more should the transcendent Creator of this world?

In fact, not only does the doctrine of the Trinity withstand attacks; it also allows us to make sense of God’s love. The Bible says that “God is love” (1 John 4:8), and love is an essential aspect of His nature. But, before creation, when God was completely alone, how could He have been loving? Nobody else existed who could be the object of God’s love.

The Gospel is Trinitarian from start to finish.

Until he created, a Unitarian god would only have himself to love. But self-love is not genuine love. By definition, love is directed outward, away from oneself and toward another. Therefore, such a god would be unable to love until he created—surely an imperfection unworthy of the true God.

By contrast, we know that the God of Scripture has exhibited love from eternity past because the members of the Trinity have always been devoted to one another. The Bible tells us that the Father loved the Son “before the foundation of the world” (John 17:24).

The surpassing value of the Trinity is also apparent from the fact that the heart of Christian faith—the Gospel itself—is incomprehensible without it. All three members of the Trinity are involved in accomplishing the work of salvation (Romans 8:11; 1 Corinthians 6:11; 2 Corinthians 1:21–22, Galatians 4:4–6; Ephesians 1:3–14; 2:18; Hebrews 9:14). For this to be true, all three persons must be divine, since God insists that He alone is Saviour (Isaiah 43:11; Hosea 13:4) and that salvation is entirely “the gift of God,” lest anyone boast (Ephesians 2:8–9).

Each member of the Trinity plays a distinct role in the work of salvation—roles which testify to their divine status. For example, only the Son became incarnate, but the New Testament presents this to believers as an example of humility, because it was from a position of being “in the form of God,” that the Son took “the form of a servant, being born in the likeness of men” (Philippians 2:3–8; cf. 2 Corinthians 8:9). Likewise, only the Son died on the cross, making propitiation for the sins of the world (1 John 2:2). But, had Jesus been a finite creature, he could not have borne God’s infinite wrath or paid the world’s debt. Only the God-man was equal to the task.

Indeed, the New Testament is replete with similar examples, indicating that the Gospel is Trinitarian from start to finish.

While the Trinity may be a challenging doctrine, it is also an exceedingly valuable one. Rather than an embarrassment for Christians, the Trinity is a rational, biblical, and insightful truth—one that clarifies who God is, and how He accomplished our salvation.

“But when the goodness and loving kindness of God our Savior appeared, he saved us, not because of works done by us in righteousness, but according to his own mercy, by the washing of regeneration and renewal of the Holy Spirit, whom he poured out on us richly through Jesus Christ our Savior, so that being justified by his grace we might become heirs according to the hope of eternal life” (Titus 3:4–7).

Praise God from whom all blessings flow! 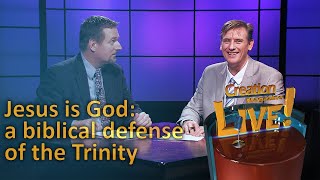 Christianity for Skeptics
by Drs Steve Kumar, Jonathan D Sarfati
US $13.00
Soft Cover
Please Nana ... Who is God?
by Margaret Wieland
US $15.00
Hard Cover
The Genesis Account
by Jonathan Sarfati
US $30.00
Hard Cover
From Creation to Salvation
by Lita Cosner Sanders
US $14.00
Soft Cover
Leaving Your Brains at the Church Door?
US $10.00
DVD
Who Made God? Can there be an uncreated Creator?
US $10.00
DVD