S. Y. from the U.S. wrote in to suggest that we should do more to highlight weaknesses in our arguments and areas where we lack understanding.

Hi. I have a question regarding the content of this ministry’s publications as well as every other creation-science publication. Why is it I don’t see anyone writing detailed articles on what we don’t know? It’s always the evolutionists that point out the problems with creation-science. Why not have a page that focuses on acknowledging the problems and gaps in understanding, having a badge of some sort on a articles that partially or fully solve a problem on the list, with a repeat of the chart, and an acknowledgement when a proposed solution fails? I would say that might hurt publicity somewhat but be more of a strong long-term solution. As time goes on you can post side-by-side comparisons of the list over time. That would also encourage researchers, that may be “in the closet” regarding their views, to think about the problems and come up with solutions, furthering the science. What do you think?

Most people have not encountered the wealth of information available that supports creation.

It’s a fair question. On the one hand, the reason most of our articles try to answer objections and argue for the biblical worldview is because we think it is the true picture of reality, and we unashamedly exist to boost people’s confidence in biblical creation. It’s not as helpful to read about non-answers as it is answers. And, frankly, most people have not encountered the wealth of information available that supports creation. All they hear about from the secular media and education system is evolution and millions of years propaganda all the time. The evolutionists are the ones with the huge megaphone, so our 9,000+ articles arguing for creation, though certainly having a powerful impact, hardly balances the scales in terms of how much people are exposed to the positive case for creation as compared to how much they hear about evolution. Also, the ‘problems’ that evolutionists have with our viewpoint are often misunderstandings or mischaracterizations on their part, so we should hardly concede the legitimacy of their misguided criticisms.

We should take a stand on what the Bible makes clear and be less dogmatic about scientific models.

However, I don’t think we hide or run from genuine difficulties or areas of disagreement either. In fact, I actually think you can see, if you really dig into our literature, that we do highlight many of them. It’s no secret that there are many controversies in Flood geology, like the extent to which the order in the fossil record is accurately portrayed by the geologic column, where the boundaries lie that separate the Flood from pre-Flood and post-Flood rocks, whether or not catastrophic plate tectonics (CPT) is the best model to explain the various facts it allegedly accounts for, how to explain the excess heat generated by CPT if it is the correct model, and many more. We’ve published many articles on this in our Journal of Creation, including a forum for both sides to interact.

There are also multiple, competing models to explain how distant starlight could reach earth in less than 6,000 years, and we’ve acknowledged various difficulties with the accelerated radiometric decay that appears to have taken place during Noah’s flood, including excess heat and radiation, and the lack of a definitive mechanism to generate the effect (though we do not see any of these challenges as fatal). Note that many scientists discovered phenomena before finding a mechanism for them. E.g. Sir Isaac Newton showed that there is a phenomenon called gravity: an attraction that follows the inverse square law. But he had no idea what caused this attraction.

In biology, there are unsolved mysteries like the purpose of the vitamin C pseudogene. Although scientists are discovering functions for pseudogenes all the time and there are good reasons to be skeptical of the evolutionary claim that this pseudogene demonstrates common ancestry between humans and apes, we still have much to learn about why this segment of DNA is present in both apes and humans.

Furthermore, there are uncertainties about theological and exegetical issues. For example, in The Creation Answers Book chapter 6, How did bad things come about?, we explain that we can only speculate within biblical boundaries about how we came to have biological structures that appear to be designed for attack or defense in today’s world. For example, did snake venom exist before the Fall and, if so, what purpose did it have? We suggest a number of reasonable possibilities for such things, even snake venom, which are consistent with biblical and scientific data, but we cannot supply a definitive explanation for each case given our limited information. See Death and Suffering Q&A.

I’m not sure your idea of a chart would work, since creationists hold a variety of opinions on many of these subjects, including differences of opinion about which theories are best and with what degree of confidence we should hold them. But we certainly do report on arguments for creation that once seemed reasonable but have been overturned by new discoveries (e.g., Missing neutrinos found! No longer an ‘age’ indicator) and we announce when creationists propose new solutions to old challenges (e.g., A new cosmology: solution to the starlight travel time problem).

Also, we have written several articles pointing out that we should take a stand on what the Bible makes clear and be less dogmatic about scientific models and things about which the Bible is not so clear. See ‘Hanging Loose’: What should we defend? and Flood models and biblical realism.

Finally, we prefer to emphasize the positive case for creation because our critics often charge us with believing in a ‘god of the gaps’. In fact, our arguments are mostly based on what we do know about science, not on gaps in understanding. See for example: Whose god? The theological response to the god-of-the-gaps and The old ‘Who created God?’ canard revisited.

Anyway, thank you for the suggestion and your concerns for balance and the long-term health of the creationist movement. Although we don’t plan to implement exactly what you proposed, hopefully you can see that we have addressed your concerns in various other ways throughout our literature. 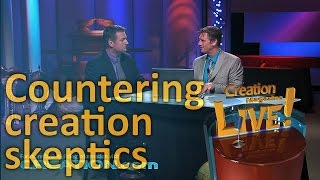