What about the ‘Stone Age’?

This week’s feedback from TA of Delhi, India, came through our affiliated website BiblicalGeology.net and is used with permission. TA’s inquiry was about anthropology, archaeology and dating methods, and Dr Tas Walker replied by email. Below is TA’s enquiry, an expanded version of Dr Walker’s reply, and a very encouraging further email from TA in response to Dr Walker’s original email reply.

Thanks for all your articles; I really enjoyed them. I am an anthropology student. May I ask how a creationist pre-historic archaeologist would date their findings, within the stone ages, for example? As for the radiometric dating, you say it’s invalid. I agree with your arguments. My question is when a creationist makes a model how would we date it? I’ve read the creationist articles about the better model for the Stone Age Part 1 & Part 2 from the CMI website. It was insightful even though I don’t seem to agree with everything in it.

Thanks for all your articles; I really enjoyed them.

Thank you, TA. Feel free to send links of articles you enjoy to friends who might benefit from them. Feel free also to post links to relevant articles on any web forums you are involved in.

I am an anthropology student.

Anthropology is an incredibly significant field of study for our understanding of man and it has consequences on such issues as the value of human life, government, law, ethics, etc. Creation.com has many articles about anthropology, archaeology, and other relevant topics.

May I ask how a creationist pre-historic archaeologist would date their findings, within the stone ages, for example? 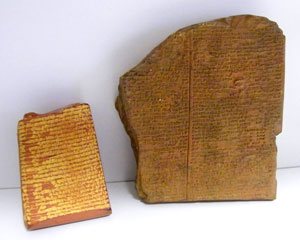 Just as modern books include an imprint page giving the date and place of publication, so too ancient clay tablets include a line at the end of the tablet giving the publication details. These are called colophons.

The book of Genesis contains regular occurrences of the Hebrew term toledoth, translated ‘These are the generations of’. Because of the grammatical and functional similarity to colophons, many Bible scholars see this as evidence that Moses compiled Genesis from ancient, even pre-Flood, historical records that were originally in tablet form.

This is called the Tablet Theory, and is considered briefly in our articles Did Moses really write Genesis?, Should Genesis be taken literally? and Genesis Contradictions? For more, see The Tablet Theory of Genesis Authorship and pages 22–30 of The Genesis Record.

For an in-depth treatment, see Who wrote Genesis? Are the Toledoth Colophons?

The terms ‘creationist’ and ‘pre-historic’ do not go well together. In some ways there is no such thing as ‘pre-history’ because the Bible is a historical record that goes right back to Creation (see ‘colophons’). On the other hand, there have been places and periods (e.g. Australia before Europeans came) when historical events were not recorded in writing.

The key thing to realize is that the whole of science operates within a paradigm and the paradigm is basically held together with the story about how everything came to be. That story is essentially assumed to be true.

Basically the paradigm is a concept, a big idea. All the scientific evidence is interpreted within that view. The paradigm is not proven; it is merely assumed. It is like a huge network of ropes and wires with thousands of people working on it, adding new wires, removing old ones, lengthening others, shortening some, etc. Each researcher works on just their individual bit of the whole network and what they do is constrained by what everyone else is doing.

Realize that there are other ways of looking at the same evidence. The biblical paradigm is held together with the history recorded in the Bible. From the chronogenealogies and other data in the Bible we can build a framework of world history, starting with Creation in six days about 6,000 years ago, followed by the Fall, pre-Flood civilization, the global Flood about 4,500 years ago, the tower of Babel, the post-Flood dispersion, and other post-Flood history. Creationist scientists assume the biblical paradigm as their way of understanding the evidence, assuming this history is accurate.

Here are a few other articles about the effect of a persons’ paradigm on the way they look at the world: My amazing paradigm change, Timing is everything, and The walls of Jericho.

As for the radiometric dating, you say it’s invalid. I agree with your arguments.

Yes. Articles we have published demonstrating the problems with it can be found listed under the topic Radiometric Dating in our Frequently Asked Questions index.

My question is when a creationist makes a model how would we date it?

Reliable historical records are indispensable to working out accurate timelines of history, and the Bible is supremely reliable in this regard.

In some ways there is no such thing as ‘pre-history’ because the Bible is a historical record that goes right back to Creation.

There are many events that are recorded both in the Bible and in secular sources. Such events are known as ‘synchronisms’, and synchronisms are used to correlate biblical and secular chronological information (such as king lists etc.). For examples of synchronisms, see Matching dates. More can be found by entering ‘synchronisms‘ in our search field. Archaeological evidence can thus be interpreted within a biblical framework.

Unfortunately, historians long ago adopted an inaccurate framework of ancient history, based on misinterpretation of Manetho’s king list. This has led to great difficulty in reconciling much archaeological data. Over the last two decades several leading secular scholars including David Rohl and Sir Colin Renfrew, have realised that the accepted timeline of ancient history is over-extended by several hundred years, and have begun calling for revision—see Egyptian history and the biblical record: a perfect match? and Carbon dating into the future. For a practical application of this to Egyptian chronology, see Timing is everything.

I’ve read the creationist articles about the better model for the Stone Age Part 1 & Part 2 from the CMI website. It was insightful even though I don’t seem to agree with everything in it.

The idea of the Stone Age, Bronze Age and Iron Age is an attempt to describe the archaeological data within an evolutionary framework. It’s just an evolutionary story about what they call pre-history, but it doesn’t really work because it is not true.

If you read Genesis you will see that from the beginning people were familiar with hunting, agriculture, nomadic life, cities, music, bronze and iron (Genesis 4:3–4, 17–22). That was before the Flood, and those who built the Ark and survived the Flood, from whom we are all descended, were capable of a high standard of culture and development.

We more or less reject the whole secular system of ‘Ages’ (Stone Age, Bronze Age, etc.), and generally try to avoid using such terms, which we consider misleading. Use of these terms subtly promotes the view that man evolved upwards from apes to humans, and from cave-dwelling hunter-gatherers to farmers to modern urbanites. The latest Creation magazine has an article about ‘The people that forgot time’ (Creation 30(3):34–37, 2008). It shows that, contrary to the evolutionary scenario, people with a so-called ‘primitive’ lifestyle arrived there because they lost their shared knowledge of culture and technology.

Some ancient peoples have been denigrated as ‘primitive’ because they lived in caves and lacked advanced technology. In the aftermath of Babel, many groups may have suffered material hardships, and been forced by circumstances to resort to living in caves and using stone tools, as they separated from speakers of other languages and spread out around the globe. Job may be describing some such people in Job 30:3–8. But cave dwellers can be still be found today, and with lifestyles that are far from ‘primitive’—consider for example The amazing cave people of Malta.

Learn all you can from your lecturers, tutors and text books. I’d encourage you to start using the biblical paradigm for interpreting the information you are learning. Begin with the big picture and work out how your particular situation fits into it.

Do you subscribe to Creation magazine and the Journal of Creation? I would certainly recommend both of these.

Thank you so much for your reply. Yes, you are right; framework really does matter. This morning I read your message and thought about it the whole afternoon. Then I read my archaeology text book. Before it has always passed my eyes it seems but today I got it. In fact, the text book says that in the western part of India, Mesolithic microliths co-exist together with copper and iron at more than two sites. Thank you so much. I’m encouraged to think deeper and read more about it.