What would Noah have observed coming off the Ark?

Spelga Dam and the post-Flood world

Have you ever thought about what Noah would have been able to see when he came off the Ark? Did he walk down the Mountains of Ararat and locate his old home? Was he able to walk down familiar streets, visit a cherished piece of coastline, or survey his favourite piece of architecture? Of course I am being facetious in my suggestions, as there is not even the slightest possibility that this was the case! The Bible is quite clear about the epic scale and total coverage involved in the global Flood (e.g. Genesis 7:19–20).

The problem is that most people, including many Christians, do not have a biblical view of the Flood.

The problem is that most people, including many Christians, do not have a biblical view of the Flood. Due to the persistent problem of cartoonified bath-tub Arks, and some people incorrectly teaching that the Flood may have been a localised event, its severity is often forgotten and instead, the idea of a tranquil Flood comes to people’s minds. Unfortunately, this is more akin to a flowing tap filling up a bath tub, or a river filling up a reservoir.

Due to a recent heatwave in the UK, June to July 2018, I was recently able to discuss this very issue in my native Northern Ireland. A normally submerged piece of history was viewable once again at Spelga Dam in the beautiful Mourne Mountains, and it quickly became a local tourist attraction.1 The reservoir that built up behind the dam, after its construction in the 1950s, covered a well-used road and bridge in an area called Deer’s Meadow. The reservoir is filled by Northern Ireland’s longest river, the River Bann, which rises at Slieve Muck, a nearby mountain, and flows directly into the reservoir, and then a further 99 miles (159 km) out to sea. The exceptionally dry weather caused the reservoir level to drop considerably, exposing the old road and bridge which are normally well under the surface of the water. This meant that now exposed road could be walked on for a few hundred feet and ran eerily into the middle of the dam.

What would Noah have observed?

With this in mind, would Noah and his family also have seen submerged pieces of history as they came off the Ark and the Flood waters abated? The answer is a definite ‘no’. The flow of water from the River Bann, which allowed the reservoir to be built up behind Spelga Dam, and the Flood which covered the earth in the time of Noah were obviously significantly different events.

The Bible tells us that, at the start of the Flood, the fountains of the great deep burst forth (Genesis 7:11). There was massive tectonic action as the original land mass (perhaps just a single continent; Genesis 1:9) broke up and formed the many continental (and smaller) sized islands that we now observe. This tectonic action led to super-volcanoes, hypercanes, and huge waves of water sweeping across the earth.

There is no indication anywhere in the Bible that any member of Noah’s family saw any pre-Flood landmark after exiting the Ark.

While the account of the Genesis Flood remains one of the most attacked parts of the Bible today, the huge deposits of sediment left behind, containing millions of rapidly laid down fossils, are a stunning testament to its historicity. The Genesis Flood was of massive proportions, unlike anything seen since, for it literally wiped away all traces of the pre-Flood existence from the face of the earth.

It is also a wonderful testimony of God’s grace, of how He prepared a way for Noah and his family to come through the Flood (judgement) and be saved, never forgetting them (Genesis 8:1). In the same way, God has prepared a way for us to be saved through His Son Jesus Christ, sent to die on a cross, so that we can be saved from the coming judgement. 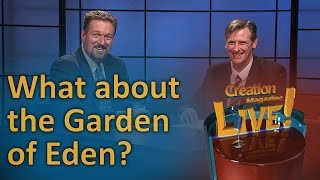