Another evolutionary ‘truth’ now conceded to be myth

In a recent Science article, several evolutionary scientists openly admitted that the claim of 99% DNA similarity between humans and chimpanzees is a myth.1 Since 1975, this misleading statistic has been touted (e.g., see box) as clear cut evidence that humans and chimps are closely related on the evolutionary tree of life.2 However, more and more genetic research has revealed that the percentage of DNA similarity has been vastly overstated.

Another icon falls by the wayside

As has so often been observed … evolutionary icons eventually collapse under the weight of the empirical data.

Just this year, we have witnessed the downfall of two ‘icons of evolution’. Not only has the idea of 99% genetic similarity between humans and chimps been abandoned, but also the myth of so-called ‘Junk DNA’ has been debunked—see Astonishing DNA complexity uncovered and Astonishing DNA complexity Update. As has so often been observed since Darwin published his Origin of Species, evolutionary icons eventually collapse under the weight of the empirical data. Meanwhile the biblical creation model is continually vindicated as each new discovery reveals hitherto-unexpected layers of complexity in what has so obviously been created—reflecting the hand of the Creator.

A correspondent recently alerted us to these displays at the Melbourne (Australia) Museum, which claim that DNA studies ‘show that humans are apes’ and that ‘our DNA is nearly identical to a chimpanzees’, with less than a 2% difference. 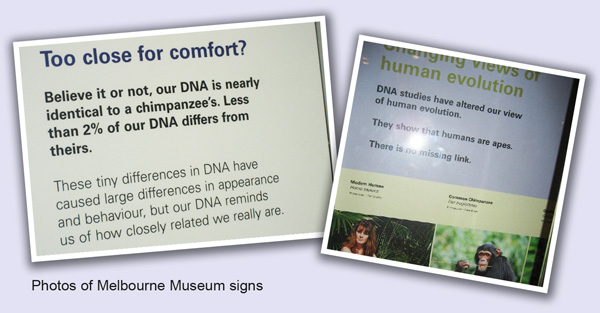 As Daniel’s article shows, even evolutionists would now admit that the ‘less than 2%’ claim is wrong—we wonder how long it will take the Melbourne Museum to correct their display accordingly?

However, evolutionists will no doubt continue to argue that ‘humans are apes’—that claim comes from the secular humanist belief that everything has arisen ultimately by evolution, no Creator being necessary. However, in some places Christians are ‘fighting back’ against such secular propaganda, and this has been reported in the media.1,2 For example, in the USA, staff of museums and science centres say they are frequently confronted by members of the public eager to challenge evolution. Consequently, an increasing number of museums are giving their staff ‘training’ in how to respond to creationists.

However, any such ‘response’ that tries to argue for evolution is easily refuted by the information freely available on this website, and in publications such as Creation magazine and the Journal of Creation. Christians armed with such information and willing to speak out against the falsehoods of the secular religious teaching at our taxpayer-funded institutions can make a difference. You, too, can arm yourself today!

Also Available in:
Your subscription already exists. We have sent you an email that will allow you to update your details.
Thanks for subscribing