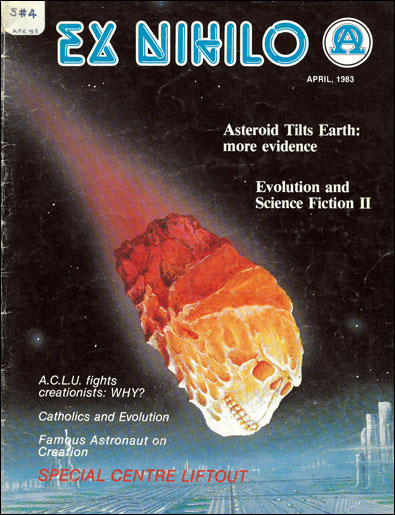 When the Russian Cosmonauts went into space in the 1950s they reported there was no sign of a creator God; no evidence of creation.

NASA Astronaut Col. Jack Lousma, who has flown over 39 million kilometres in space in both Skylab and space shuttle flights, disagrees with his Russian counterparts. He’s quite convinced that outer space offers plenty of evidence of both creation and creator. Here’s what he says.

(Reprinted by permission of RADAS)

I have never been able to follow the reasoning of the two cosmonauts who said they had explored space and had not seen God. The distances they travelled didn’t begin to penetrate the vast vistas of the cosmos. None of us has gone anywhere. Even after travelling 39 million kilometres in Skylab, I really haven’t gone anywhere either. In comparison to the size of the universe, I’ve only touched the very edge.

If we tried to measure the universe in kilometres we would be talking in figures with many, many zeroes on them … beyond our understanding or our ability to avoid confusion.

Some astronauts have gone farther into space than I have [gone]. But even the men who walked on the moon were only 400,000 kilometres away from earth. They were so close that a radio message from NASA’s Mission Control Centre could reach them in one and a third seconds.

I’m not being modest when I say we haven’t been anywhere yet. The size of the universe is the closest thing to infinity that I can imagine. It helps me to understand just a little bit of the infinite wisdom and power of the Creator-God who I’m convinced made this vast universe.

There is a sense of personal danger in space travel—and I think that’s one of the feelings that makes a person do this kind of thing. There’s a certain amount of challenge involved in risk. You extend the thing you would least like to lose—your life.

But when you leave the earth, in a spacecraft, I personally think there’s a real motivation to look toward God. After being in space, I certainly have a much greater appreciation for the world God has made, the universe He’s created. It’s very clear in my mind that this universe couldn’t have happened by chance.

People ask me, ‘Did you have any special religious experience in space?’ I answer them, ‘I’m sorry. My experience in space was no different than it was on earth’. Reading my Bible in Skylab was no different than reading it on earth, as I had been doing daily for years. Well, there was one small difference. The pages were a little easier to turn in that weightless environment.

That book tells us a lot about the world in which we’re living and how it got to be the way it is. I think it’s important to keep in touch with the One who made the total universe. I read that book on a daily basis here on earth and I talk to the One who wrote it. So why should I do any differently in space?

Space does do interesting things to your body…particularly after 59 days of weightlessness. Blood tends to shift toward the abdomen. So our legs thinned and our abdomens enlarged. When we relaxed in space, our arms drifted upward. When you sleep on earth your neck is limp and relaxed on the pillow and doesn’t move around. In space, however, your head tends to whirl around or to move from side to side. So we use a small band around our foreheads to tie us down when we sleep. Haircuts are really unique. Because there is no gravity hair doesn’t fall…you need a vacuum cleaner to prevent hair from floating around your head. Coming back to earth also produced some difficulties. We came back from our flight with 20 percent less volume of blood, and about 10 percent fewer red cells.

It was difficult to walk a straight line or to proceed in an erect fashion down a straight line. We tended to wander to either side, and then to over-correct as we tried to stabilise our course. Apparently the sensors in our legs were no longer used to any side movement.

I’ve seen some of the intricate engineering that is necessary before a spacecraft can reach orbit. My experiences with Skylab and the Apollo-Soyuz Mission and now in the Space Shuttle reconfirm that nothing worthwhile happens without intelligent planning and design. Nothing creates itself. I don’t see God in space as a physical body. But I see all kinds of evidence of His existence, His intelligence and His power.

I’m convinced only an intelligent God could have built a universe like this.