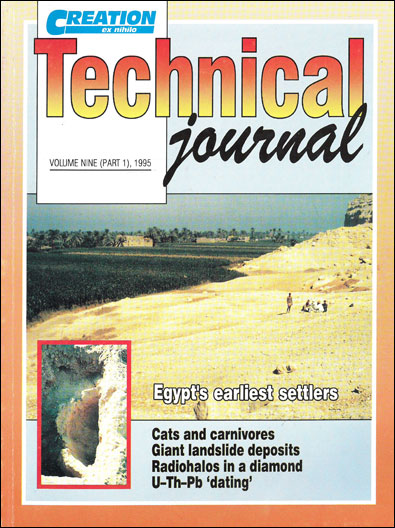 Astronomical theory has lately run into a series of nasty problems. The most troublesome problem is the most recent calculation of the so-called Hubble constant using the repaired Hubble Space Telescope. This constant is used to calculate the expansion rate of the universe.1 Based on measurements of 20 Cepheid variable stars in the Virgo Cluster of galaxies, the Hubble constant was measured at 80 kilometres per second per megaparsec (km s-1 Mpc-1).2,3 Assuming the Big Bang theory for the origin of the universe, the above expansion rate corresponds to an ‘age’ of the universe of 8 to 12 billion years, depending upon how much ‘dark matter’ is in the universe. This more sophisticated measurement agrees with other less precise recent measurements. Another group of astronomers led by Allan Sandage have claimed and consistently measured the Hubble constant at about 50 km s-1 Mpc-1.4 This would make the universe about 14 to 20 billion years old.5 Several astronomers recently argued that astronomical theories would best fit a Hubble constant of 30 km s-1 Mpc-1.6

The newer, younger age contradicts the age of globular clusters, dense groupings of stars in a galaxy, that are thought to be 16 billion years old. Thus, astronomers are presented with the paradox that the objects in the universe may be much older than the universe itself. It also is

‘… a blow for the Big Bang account of the beginning of the Universe, although not necessarily a fatal one.’7

Another recent report throws confusion on the postulated dark matter in the universe.8 Dark matter is needed by old age theorists to account for rapid stellar speeds in galaxies. If there is enough of this dark matter, much more than visible matter, then the universe would also be ‘closed’. Assuming the Big Bang model, a closed universe would eventually collapse back onto itself, if there was enough dark matter. It was hoped that this dark matter would be mostly in the form of small stars called red dwarfs. New Hubble Space Telescope measurements now indicate there are hardly any of these red dwarf stars. So cosmologists must rely more on some type of exotic matter, which has so far been undetected. A further problem is that the red dwarfs they did detect are believed to weigh in at 20 % of the sun’s mass, which is contrary to popular models of star formation. One of these red dwarfs was seen to produce a flare, an event supposedly reserved only for more massive stars.9

Closer to home, astronomers are finally concluding after 25 years of measurements that the missing solar neutrinos are really missing. Four different detectors can account for only 30–50% of the neutrinos that theoretical models of solar fusion say must exist. This paradox

‘… refutes the basic logic of the reaction chain that powers the sun by the fusion of protons into heavy elements.’10

More specifically, in the proton-proton fusion reaction boron-8 must be made from beryllium-7, but hardly any neutrinos of beryllium-7 are detected while plenty of boron-8 neutrinos are detected. Although indicating fusion reactions in the sun, the missing neutrinos point to some glaring theoretical problems in understanding our own sun, not to speak of distant stars.

[Ed. note: while the above argument on neutrinos was cogent given the information then available, subsequent information has superseded it, meaning that the shortfall problem seems to have been solved. Therefore creationists should no longer use this as an ‘ age’ argument — see more detail.]

Apparent velocities greater than the speed of light have been claimed before in radio-emitting components in some distant quasars and active galactic nuclei. These claims have been uncertain because of the extreme distances surmised for these exotic objects. Now, however, it is claimed that apparent velocities greater than the speed of light have been detected within our own Milky Way Galaxy.11 Quasars are in the news again. A super-massive black hole at the centre of a galaxy is thought to provide the tremendous energy for a quasar. However, a recent report at the annual meeting of the American Astronomical Society indicates that only four out of the 15 quasars surveyed by the Hubble Space Telescope are associated with galaxies.12 Geoffrey Burbidge believes the ramifications of this discovery are far reaching and challenge the paradigm that quasars are huge black holes. In another development, some physicists are attacking the very existence of black holes:-

‘But a handful of physicists who have offered their work at recent meetings and in upcoming publications think black hole seekers are pursuing a chimera, something like the ether of the 19th century.’13

These reports from the most widely read journals in the world indicate the field of astronomy has quite a number of severe theoretical problems.