Charles Darwin suffered extreme ill-health for most of his working life. The New Encyclopaedia Britannica says, ‘Some of the symptoms—painful flatulence, vomiting, insomnia, palpitations—appeared in force as soon as he began his first transmutation notebook, in 1837. [This is the year after he returned to England from his five-year voyage aboard H.M.S. Beagle.] Although he was exposed to insects in South America and could possibly have caught Chagas’ or some other tropical disease, a careful analysis of the attacks in the context of his activities points to psychogenic origins.’1 (Psychogenic means originating in the mind or in mental condition.) Other symptoms included ‘nausea, headache … sensitive stomach, spells of faintness, twitching muscles, spinning head, spots before the eyes.’2 Today we would call this an anxiety-caused psychoneurosis.3

So then, what caused this condition of extreme stress in Darwin? What was he so worried about? And how is it relevant to us today?

Charles’s thinking and writing on the subject of evolution and natural selection caused him to reject all the religious influences in his life. One of these was William Paley.

In his early twenties Charles was willing to become an Anglican clergyman. As part of his theological studies at Cambridge he read William Paley’s book Natural Theology,4 which begins with the famous ‘watch’ argument for creation (a watch requires a watchmaker and so design requires a Designer), about which Charles said, ‘I do not think I hardly ever admired a book more than Paley’s Natural Theology. I could almost formerly have said it by heart.’5

Another religious influence was his wife Emma, whom he married in 1839, and who used to read the Bible to their children. As Charles developed his theory of natural selection, these influences diminished. His son Francis recalled him as saying, ‘I never gave up Christianity until I was forty years of age.’6 And the death of his eldest daughter Annie from fever at this period of his life hammered the final nail in the coffin of his Christianity.

More than all this however, Darwin knew that his theory was sheer atheistic materialism—a bombshell which when released on Victorian society would undermine people’s faith in God, the Bible, and the Church. In effect, he was shaking his fist at Almighty God. Professor Adam Sedgwick of Cambridge, the foremost geologist of his day and a creationist, recognized this as soon as he read the Origin, about 1861. He wrote, ‘From first to last it is a dish of rank materialism cleverly cooked and served up…And why is this done? For no other reason, I am sure, except to make us independent of a Creator.’7

And the death of his eldest daughter Annie from fever at this period of his life hammered the final nail in the coffin of his Christianity.

Darwin’s chief proponent was the most prominent unbeliever, hater of religion, and arch-enemy of the Church of his day—Thomas Henry Huxley, nicknamed ‘Darwin’s bulldog’. Sir Julian Huxley, Thomas’s grandson, who gave the keynote address at the centenary celebration of the publishing of the Origin, held in Chicago in 1959, said, ‘Darwin’s real achievement was to remove the whole idea of God as the creator of organisms from the sphere of rational discussion.’8,9

Psychologically there can be little doubt that Charles Darwin suffered from feelings of guilt. These undoubtedly arose from his desire to escape from God and from the force of Paley’s arguments about design in his Natural Theology. That is, Darwin’s theory of natural selection was his attempt to explain design without the need for an intelligent Designer. Professor Stephen Jay Gould of Harvard University concurs; he believes that ‘Darwin constructed the theory of natural selection in large measure as a direct refutation of the argument from design’.10,11

However, there is more to it than that. Natural selection to Darwin was not something progressive, as many modern writers portray it, much less a process that God used to create, as theistic evolutionists proclaim it; rather it was something which was utterly planless and purposeless—Gould refers to it as ‘the naturalism of purposelessness’.12 Darwin knew that this was an idea which could and would destroy the faith of millions of believers—and he was the one who was about to unleash it on an unsuspecting world. But what if he was wrong? How could he accept the responsibility for what it would do to others? It is little wonder that he ‘broke out in boils’ (see below), referred to the Origin as ‘my accursed book’13 and seems to have thought of himself as a ‘Devil’s Chaplain’.14

Publication of On the Origin of Species

The result was that Darwin put off publishing his work for 20 years. It was only the fact that in June 1858 he received a letter from Alfred Russel Wallace (a naturalist working in the Malay Archipelago) with a manuscript that perfectly summarized the theory of natural selection which Charles had for so long been contemplating that finally galvanized him into action. As a result, he abandoned his plans to write a multi-volume epic and instead produced a single-volume ‘Abstract’, as he described it several times in the Introduction. This ‘Abstract’ was published on November 24, 1859, with the title, On the Origin of Species.15

There was considerable trauma associated with this. In the year leading up to publication he was rarely able to write for more than 20 minutes at a time without stomach pains, and he finished the proofs on October 1, 1859, in between fits of vomiting.

Ten days before the proofs were bound he wrote to his friend J.D. Hooker, ‘I have been very bad lately; having had an awful "crisis" one leg swelled like elephantiasis—eyes almost closed up—covered with a rash & fiery Boils: but they tell me it will surely do me much good.—it was like living in Hell.’16,17 His modern biographers talk of his ‘self-doubt, his nagging, gnawing fear that "I … have devoted my life to a phantasy"’.18

He was too sick to be on hand in London when the first copies were sold, or to attend the debate between Thomas Huxley and Bishop Samuel Wilberforce held at Oxford on June 30, 1860, or to attend the Royal Society of London meeting that awarded him its Copley Medal in November 1864.19,20 The same year he wrote to Hooker, ‘I shd [sic] suppose few human beings had vomited so often during the last 5 months.’21

What Darwin did not know

We now know that if Darwin could have foreseen coming scientific developments, he would have had good reason to be concerned that his theory might one day be proved wrong.

In particular, Gregor Mendel had not yet established and published his work on the laws of heredity and genetics, which said that the characteristics of offspring are passed on from parents according to precise mathematical ratios and do not derive from chance random processes in what Darwin called ‘blending inheritance’.

James Joule, R.J.E. Clausius, and Lord Kelvin were only just developing the concepts of thermodynamics, the first law of which states that energy can neither be created nor destroyed (so the present universe could not have created itself), and the second law of which says that the universe is proceeding in a downward degenerating direction of increasing disorganization (so things overall do not of themselves become more organized with time).

Louis Pasteur was just beginning his famous experiments which showed that life (even microbial life) comes from life, not from non-life. The mathematical laws of probability, which show that the odds of life’s occurring by chance are effectively zero, had not yet been applied to the theory of evolution. Molecular biology, with its revelation that the cell is so enormously complex that it could not possibly have been formed by chance, had not yet commenced.

The fossil record had not yet been investigated sufficiently for palaeontologists to be able to say, as they now do, that chains of intermediate ‘links’ do not exist. Any one of these concepts or laws, if known to Charles Darwin at the time he was writing his Origin (1856–59), would have been enough to torpedo his ideas; taken all together they kill the theory of evolution stone dead!

Today all these counters to the theory of evolution are known and, as such, form a compelling case against evolution. In short, they indicate that evolution could not have taken place, while the fossil record shows that evolution did not take place. The incredible thing is that otherwise rational scientists continue to cling to the concept of evolution, modifying it in any way they can to get around the proofs against it, regardless of the destructive moral and social effects that evolutionary theory has on society. As Michael Denton says, ‘… today it is perhaps the Darwinian view of nature more than any other that is responsible for the agnostic and sceptical outlook of the twentieth century.’22 Darwin did well to be anxious about the long-term effects of his theory!

But why has this happened? Why has the theory become so much more important than the evidence necessary to sustain it?

Answer: Because of what the alternative involves. If the biblical account of creation is true, then there will be a Day of Judgment, for God the Creator has said that He has ‘appointed a day in which He will judge the world in righteousness by that man whom he hath ordained [namely Jesus]; whereof He hath given assurance unto all men, in that He raised Him from the dead’ (Acts 17:31). 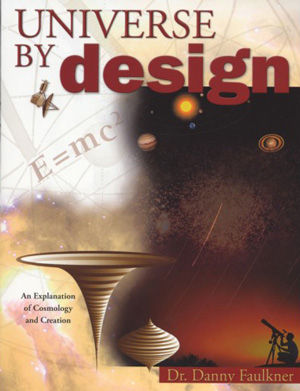 Universe by Design
by Danny Faulkner
US $6.00
eReader (.epub)