The creation/evolution debate is often portrayed as a ‘science vs. faith’ type of argument. ‘Science is about facts, where we do experiments and see with our own eyes’ someone might say, while ‘Faith is something you can’t see or test at all’.

However, when people think of science, they’re usually picturing what’s called ‘operational’ science. This science is based on repeatable, observable experiments such as dropping a coin over and over to show how gravity works, etc.

The ‘scientific method’ is what gives us the technology we have today. Cell phones, IPods etc come from repeatable experimentation, with results that can be agreed and shared among various people.

However, there is another type of science called historical or ‘origins’ science that deals with the past. This is the kind of science we see in action on a TV crime show like CSI (Crime Scene Investigation).

In this case investigators come upon a crime scene (let’s say a murder) and observe several clues or ‘facts’ that they can apply various scientific tests upon. They may analyze a hair follicle, and try and match it to a suspect that may have been at the scene of the crime when the victim was killed etc.

Because they weren’t there at the time the crime occurred, they try to figure out what happened by developing a story that pieces the clues together in a logical way. But because they didn’t observe it happen, and they cannot repeat the event, they cannot ‘prove’ what actually did take place in a similar way that you can ‘prove’ that gravity exists.

Unfortunately we have all heard of people wrongfully convicted of a crime. This is because the investigators are dealing with the past and must make up a story they believe fits the facts. They must accept by ‘faith’ that their explanation of the facts is reasonable and correct.

Years later someone may uncover new evidence that contradicts that attempted explanation, forcing a rethink of what might have happened. Sometimes someone is able to make up a more convincing story. Or, what can happen in some cases (especially when a substantial reward for information is offered), eyewitnesses come out of hiding to say what really happened, and who was involved. (Sometimes one of the eyewitnesses can even be the criminal himself, plagued by guilt and wanting to confess and repent.) Ultimately, a corroborated eyewitness account is the only way of knowing what happened in the past, as the Bible makes clear (see, e.g., 2 Corinthians 13:1 (quoting Deuteronomy 19:5); Job 38:4,21).

When the crime eventually reaches the courtroom it is not just a matter of presenting scientific facts. Rather there are different views about the case and these are represented by two lawyers. One is the prosecutor and one is the defense. Each one takes the exact same evidence and tries to convince the judge/jury that their story fits the facts.

‘We take the side of science in spite of the patent absurdity of some of its constructs … in spite of the tolerance of the scientific community for unsubstantiated just-so stories, because we have a prior commitment, a commitment to materialism. … materialism is absolute, for we cannot allow a Divine Foot in the door.’1

Doesn’t sound very unbiased does it? No, the fact is that both creationists and evolutionists are biased, because of their starting positions.

It’s just like the defense lawyer and the prosecutor in a trial. They start with a certain position and view all evidence through a certain paradigm. Both of them have the same evidence but they come to completely different conclusions!

It’s just like the defense lawyer and the prosecutor in a trial. They start with a certain position and view all evidence through a certain paradigm. Both of them have the same evidence but they come to completely different conclusions!

Can you imagine the defendant’s response? ‘Hey! You were supposed to defend my position, not agree with the other side!’

Unfortunately this is similar to what many Christians have done in the creation/evolution debate. Not understanding, perhaps, how the inherent bias in the evolutionist affects their explanation of ‘facts’, they have compromised the word of God. Instead of offering an intelligent defense of Scripture, they have adopted the opposing side’s story of what supposedly happened in the past.

Proverbs 18:17 says; ‘The first to present his case seems right, till another comes forward and questions him.’

Obviously the jury in a trial must examine and consider the evidence presented in a trial from both the prosecution and the defense. If they were only presented one view it would be considered a travesty of justice, a ‘kangaroo court’.

But this is exactly the situation in virtually all public education systems regarding the origins issue! Only one side is presented (materialistic evolution). Any attempts to introduce the other side, such as concepts to do with creation or intelligent design are simply not allowed. This biased approach has led many Christians to abandon their faith and adopt the ‘other side’s’ explanation of origins.

In a court of law, if a witness’s testimony can be shown to be inconsistent, they are no longer credible in the jury’s eyes. And so it is with the majority of people in the western world. They believe that the Bible has been proven unreliable and is unauthoratitive. To them evolutionary ‘science’ has more authority than Scripture.

In a court of law an eyewitness account by a trusted source is more powerful than circumstantial evidence. When it comes to the history of the world, only God can tell us its true history with total accuracy. After all, He was there at the time. Christians that believe Jesus can be trusted to save them from their sins should believe they can trust the words of His testimony from the very first book of the Bible (Genesis) as well.

CMI has many resources that can help you to sift through the evidence from a ‘Bible first’ viewpoint. Take time to explore this website and check out the books, DVDs and publications like Creation Magazine and the Journal of Creation. These resources will show you the ‘other side of the coin’ in the origins debate. 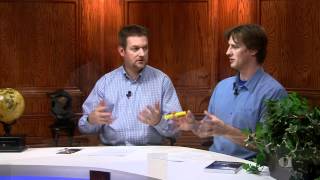 15 Questions for Evolutionists -- #14 Why is evolution taught as operational science?