21 July marks the 40-year anniversary of the first landing on the moon. In 1969, Neil Armstrong took the first steps on the moon, a major achievement of space exploration. Apollo 11 was followed by five other moon landings which led to a better understanding of the composition and geology of the moon.

However, in this Darwin Bicentennial year, Professor Martin Ward, who is head of Physics at Durham University, made this statement (emphasis added):

“Apart from the sheer wonder of seeing on live TV grainy images of man on the moon, many people might ask ‘what has the moon ever done for us?’ There are superficial justifications for visiting our nearest neighbour, one being that space technology saw the advent of non-stick frying pans. However, the Apollo programme also pushed forward computer technology and the miniaturisation of electronics which benefit our lives today. The deepest justification for visiting the moon, though, is that many astronomers now believe it may have played a crucial role in the evolution of life on Earth. Information gained from moon rock samples, and experiments set up on the lunar surface, have given us new insights into the make-up and evolution of the moon and hence our own origins.”

Ward does not explain in what way the understanding of the makeup of the moon has affected evolutionary theory and the evolutionist explanation for human origins, though it is possible to guess at what he meant. But as CMI has shown before, the moon is in reality a huge problem for evolution and instead makes sense within a biblical framework.

Evolutionary Theories of the Moon’s Origin

In order to blast enough debris to form the moon, the colliding object would have had to be at least twice as large as Mars or the debris would fall back to Earth.

Evolutionists have had several theories for the moon’s origin, but all of them have serious flaws. Currently, the theory that is accepted by most evolutionary astronomers, and also by the compromising progressive creationist astronomer Hugh Ross, is the Impact Theory. This is the idea that the moon was formed from a collision between the Earth and another object. This theory also has its problems; in order to blast enough debris to form the moon, the colliding object would have had to be at least twice as large as Mars or the debris would fall back to Earth. There is also the problem of losing angular momentum.

The Function of the Moon

Genesis 1:17-18 says that the sun and moon were created to “give light on the earth, to govern the day and the night, and to separate light from darkness.” So one of the important functions of the moon is to light the world at night. Many of the world’s cultures, including the ancient Jews, used a lunar calendar that used the phases of the moon to mark the passage of time, so there was also an important time-keeping function. We now know that the moon also plays a crucial role to life on Earth; the pull of its gravity causes the tides in Earth’s oceans, which cleanse the shorelines and keep the ocean’s currents circulating. Without this force, eventually the oceans would stagnate.

Many of the world’s cultures, including the ancient Jews, used a lunar calendar that used the phases of the moon to mark the passage of time, so the moon had an important time-keeping function.

Friction caused by the tides is gradually slowing the earth’s rotation and lengthening the days (by 0.002 seconds per century). The momentum lost by the earth is gained by the moon, causing it to recede from the earth by about 4 centimeters per year, and it would have receded at a faster rate in the past. We know that the moon could not have been closer than 18,400 km from the earth to begin with, or Earth’s tidal forces would have shattered it. This gives us a maximum possible age for the moon of 1.37 billion years, far less than what evolution would require. Of course, this does not mean that the moon is that old, because the moon did not necessarily start out as close as possible to the earth.

Another argument for design involves the angular size of the sun and moon. The moon is 400 times smaller than the sun, but it is also 400 times closer to Earth. This makes them look the same size from Earth; they both take up approximately ½ degree in the sky. If this were not the case, complete solar eclipses would not be possible. Without solar eclipses, it would be difficult to gain information about the chromosphere, a part of the sun’s atmosphere which is outshined by the photosphere, except briefly at the beginning and end of a complete solar eclipse, as well as other solar phenomena.

Contrary to Ward’s assertion, the moon gives us several pieces of evidence for the recent creation and intelligent design of the universe, and only raises questions for the evolutionist astronomers who have yet to propose a plausible account for its origin by naturalistic means.

Was the Apollo 11 moon landing a hoax? 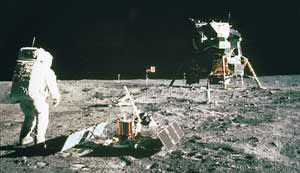 According to a recent Telegraph article, one-fourth of British people surveyed believed that the Apollo 11 moon landing never actually happened. Various conspiracy theorists give reasons why they believe the moon landings were faked. They accuse NASA of staging the landing, and cite what looks like wind moving the flag and the absence of stars in the photos as evidence for their theory. Experts counter that what looks like wind is the result of the astronauts handling the flexible aluminum flag pole, which continued to vibrate after they let go of the flag giving the appearance of wind. The stars were not visible due to the rapid exposure time of the cameras, necessary to produce sufficient detail in the photographs. They also argue that the moon rocks are identical to those found in Antarctica, but geologists counter that moon rocks found on earth are scorched by their entry into Earth’s atmosphere, while the rocks brought by the Apollo 11 crew lack this scorching, meaning that they must have been brought back to Earth by humans. The main claims are debunked on our Don’t Use page, the 7th most accessed page on the CMI site.

It is popular to accuse the government of hiding the truth, but to go forty years without one leak from inside about the true nature of the landing would be an incredible achievement, one that deserves the public’s skepticism, for the simple reason that no government is intelligent enough to pull off such an elaborate cover-up! It is interesting that often self-proclaimed ‘skeptics’ are the most susceptible to these conspiracy theories. But there is no reason to doubt the ‘official story’ of the Apollo 11 landing, especially as a creationist, James Irwin, landed on the moon in a later Apollo mission, and new photos of the moon taken by NASA’s Lunar Reconnaissance Orbiter definitively put these theories to rest. The photos show the landing sites for five of the six Apollo landings, with the remaining Apollo 12 landing site remaining to be photographed.