A preliminary response to a new study that has excited some evolutionists, probably more than the facts allow

The internet in mid-July 2005 was abuzz with headlines which implied to the layperson that it has now been proven beyond doubt that dinosaurs ‘breathed like birds’. 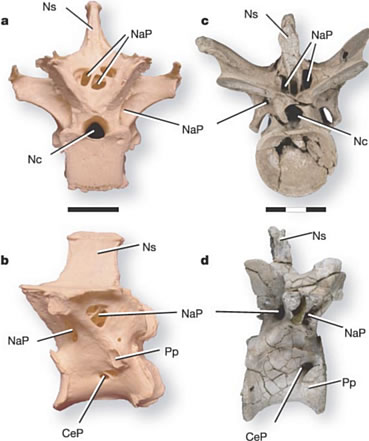 All this has come from a new study dealing with the fossil remains of a very beautifully preserved theropod dinosaur, Majungatholus atopusi, just published in the prestigious British science journal Nature.1 The fact that theropod dinosaurs (that group believed by many evolutionists to have given rise to birds) have pneumatization (special hollow air spaces) in some of their bones is not new, nor that birds do, too. In particular, the lungs of birds interact with a system of air sacs which ‘invade’ sections of the skeleton, particularly the vertebral bodies.

Those vertebral bodies which are present in this dinosaur show in remarkable detail (see diagram, from the Nature article, reproduced under the ‘fair use’ provisions of copyright) air cavities within the bone (pneumatizations). These are so strongly analogous with ones in a modern bird that I think one can reasonably infer that the dinosaur possessed the following:

Note that the sacs themselves are not preserved, nor available to study, so the above cannot be known for certain, just that, as stated, it is very reasonable to infer it.

In another diagram associated with the article, the dinosaur skeleton is drawn with not just the above three features but, in addition, (4) a clavicular air sac and (5) a thoracic air sac as modern birds have. However, there appears to be no fossil evidence of (4) and (5). The caption states that these are ‘tertiary-level inferences emphasizing the uncertainty surrounding the reconstruction of soft tissues not constrained by osteological evidence.’ In other words, there is no evidence from fossil bones from which one can even infer the existence of these soft tissue air sacs.  Rather, they are believed to be present by way of ‘tertiary inference’—presumably as follows: if (1) – (3), all known to be features of bird respiration, are (secondarily) inferred to be present, then it’s an educated guess that probably (4) – (5) are present as well. However, this guess is heavily influenced by the presumption that theropods are the evolutionary ancestors of birds. But this is hotly disputed by some evolutionist experts themselves, and it is just as reasonable to presume that theropods did not have those last two sacs.

Further, even if it were to turn out that theropods did have all five ‘pneumatic features’, it is again very much a ‘tertiary inference’ (an indirect assumption, more than one step from the evidence) that this theropod therefore had the same flow-through ventilation system as birds. It is this flow-through aspect, where the air keeps moving in the same direction, that makes the avian lung so special (and as far as is known for certain, unique), compared to the ‘bellows’ (in and out) lung of mammals or reptiles.

At present, all one can say is that the presence of a flow-through lung in this theropod may have been the case (mildly supported by certain aspects of spine and ribcage anatomy), but for all anyone knows, theropods may in fact have had a unique combination of a bellows lung (unlike birds) and a system of (some) air sacs and pneumatized vertebrae (like birds). The air sacs may have served to enhance oxygen efficiency during running.

In fact, pneumatizations of bone are already known to have existed in non-theropod dinosaurs, such as the large sauropods, and in the flying reptiles (pterosaurs). Neither of these are believed to be the ancestors of birds, so evolutionary speculations about these pneumatizations have been much more circumspect, and related more straightforwardly to their obvious design function of lightening the bones.

Such lightening is important, not just for flight, but obviously also to make locomotion easier for the big lumbering sauropod earth-shakers. Theropods (at least the smaller ones) are believed to have been speedy runners, so lighter bones would seem to be an important design feature for them, too. There is no reason, though, why they may not also have shared with birds all or some of the same design features for efficient use of oxygen, as already stated.

How could any creature breathe while … air was not yet flowing through but no longer going in and out?

Finally, let’s assume for the sake of argument that theropod dinosaurs indeed had the same flow-through lung type as birds. It would bring evolutionists not a single step closer to being able to conceive of the inconceivable—how such a lung could have evolved step by step from the bellows lung of its assumed evolutionary forebears.  It would only shift the name of the problem from the origin of the avian lung to the origin of the theropod-avian lung.

How could any creature breathe while the in-between stages were evolving, while air was not yet flowing through but no longer going in and out? What conceivable selection pressure could act on an already efficient system of breathing, especially one that would have had to get worse before it got better in efficiency terms?  (The Nature article, generally conservatively written, speculates cautiously but lamely about how somehow the development of an air sac behind the lung might facilitate the evolution of flow-through ventilation, without touching upon the logistic ‘in principle’ barriers. For this and still more problems, see Bird evolution?)

Actually, the above has really been excessively kind to evolutionists. We need to remember the discovery of the theropod Scipionyx samniticus, with traces of internal organs suggesting to several researchers that it did not breathe like birds, but rather more like the ‘liver-pump’ system in crocodiles. Then there is the evidence from ostrich embryos that the thumb development in theropods is all wrong for them to have been the ancestors of birds. (See also Which came first, the dino or the bird?)