Doctor to the disadvantaged

Lara Wieland1 (MBBS, FRACGP, FACCRM, Grad. Dip. Rural GP) is no ordinary medical doctor. Her burning ambition is to help the most disadvantaged and impoverished group in her homeland of Australia. I am referring to Australian Aboriginals, who, in the main, do not share the common benefits of being born into one of the wealthiest nations on Earth.

Lara turned down the luxury of a comfortable general practice in rural suburbia to spend several years in remote disadvantaged communities on Cape York, far north Queensland (a State of Australia). This is “the outback” where conditions are tough; the climate is searingly hot, and the nearest town could be hundreds of kilometres away.

Sadly, Australia’s Aboriginals suffer basic health problems more akin to those of a third world country. Endemic diseases include rheumatic fever, leprosy, tuberculosis, STDs2 and even malnutrition on a gross scale. For example, when a toilet breaks down in a house occupied by 17 people, one cannot call a repairman, and the resultant unsanitary conditions lead to gastrointestinal problems. Life spans are about 20 years shorter, and infant mortality rates three times higher, than the national average.

Speaking up for the disadvantaged

Lara attributes her motivation to serve to her upbringing. Her father is Dr Carl Wieland (pictured below with Lara), the founder of Creation magazine and Managing Director of Creation Ministries International (Australia). And because Lara was raised in northern Queensland, she also encountered many indigenous people.

It had an impact. She recalls documentaries about Charles Darwin’s view that Australian Aboriginals might be the “missing link”. She knew this was incorrect, and remembers the pain that such an evolutionary view inflicted upon this already impoverished group. Lara says, “I saw the tears in their eyes when my Dad would tell them that we were all created in the image of God and that regardless of skin colour we were all equal. If Aboriginals are provided with the same opportunities they can be just as productive as anyone else.” One of her favourite passages is Proverbs 31:8–9, which says, “Speak up for those who cannot speak for themselves, for the rights of all who are destitute. Speak up and judge fairly; defend the rights of the poor and needy.”

Interestingly, Lara initially received criticism for her “career” choice. Some commented that perhaps she could not get a “real job”. These misperceptions only drove her further.

‘Speak up for those who cannot speak for themselves, for the rights of all who are destitute. Speak up and judge fairly; defend the rights of the poor and needy.’—Proverbs 31:8–9

Growing up, she considered becoming a medical missionary, but thought, “Why go overseas when there is such a need in our own back yard?” She adds, “God instilled in me a love for Aboriginal people. Everywhere I turned I saw great hardship and injustice, and other effects of the Curse. These were being ignored by the medical establishment and even Christians.”

Lara admits that both she and her sister, Lisa, had their “wilderness experiences”—i.e., a period when they drifted away from the faith. But, she stresses the importance of parents spending time with their children on the subject of origins saying, “If not for the strong Christian foundation we received, beginning with creation, it could have been much worse.”

“Even though I was not strong in my walk at the time, my creationist convictions never wavered through six years of medical school, being bombarded with zoology, biology, anatomy etc., all soaked in evolution. Because I had heard so much about creation, it taught me to think critically about the evidence presented.”

She laughed and said, “I remember being taught about Haeckel’s famous embryo drawings at the same time my dad was preaching about them being a fraud!”3

It also brings home the problem that evolutionary teaching can have when young Christian minds are not prepared. She advises students coping with evolution, “Remember, you’re marked on regurgitating what you’ve been taught. You’re not required to believe it. I often used to write ‘The theory of evolution says … ’, for example.”

When she first met her future husband, Ron, he was an evolutionist who did not believe in God. Of his subsequent conversion, Lara teases, “He didn’t have a chance. I loaded him up with creation materials and dragged him along to all my dad’s meetings!”

Why are there problems?

Because of evolutionary thinking, even those who feel sorry for the plight of Aboriginals often don’t treat them as pure equals.

Because of evolutionary thinking, even those who feel sorry for the plight of Aboriginals often don’t treat them as true equals. They will campaign for Aboriginal rights, but attempt to push them back into the cultural practices they had before European settlement. Driven by the “noble savage” concept fostered by evolution, it only prolongs their hardship.

Conversely, Lara simply views Aboriginals as equals—as human beings—recognizing that she could just as easily have been born into one of these communities. She understands they are people under the same Curse as everyone else, separated from God like all others, unless reborn—and that they, too, desperately need the Lord. She says, “And once again, I had this attitude because I saw my father live this out practically.”

Lara points out that when missionaries first arrived, Aboriginals resonated with many Christian values and readily accepted them. Compared to current conditions, communities were relatively stable. But when the government came in and took over the mission stations, they had the misguided evolutionary view that the Christian influence was destroying Aboriginal people by changing their culture. This created a moral vacuum that was filled by alcohol, drugs, sex and violence, a situation that Aboriginal elders also recognize.

These misguided policies have contributed to the problems we see today. For example, most Cape York communities went from government control to limited self-governance. Although they were reasonably self-sufficient beforehand, the introduction of government welfare reduced the need to work, and the resultant dependence on handouts destroyed the culture and morale of the communities.

Lara has experienced the social dysfunction first hand. Alcohol abuse, for example, takes away money for food, destroys parenting and the ability to raise children in a safe environment. She explains, “It is heartbreaking when a young child is brought to you as the result of sexual abuse. While governments concern themselves with being ‘politically correct’, people are being horrifically damaged. It’s an ongoing cycle. Children with simple ear infections that could easily be treated with antibiotics go deaf because community money is being squandered. Corruption is rife but government is frightened to speak up for fear of being called racist.” Such frustrations led Lara to leave Cape York for Cairns, where she now intervenes directly by running a health clinic for “at risk” Aboriginal children and families. But she regularly returns to “the Cape” to help run Christ-centred vacation activities for Aboriginal young people.

‘If we believe the Bible, then Australian Aboriginals are individuals whom God loves. Even a single life changed is one lost sheep restored to their Creator, even causing the angels to rejoice.’—Dr Lara Wieland

Due to evolutionary teaching, many subconsciously believe that Aboriginals are somehow less than fully human, and perhaps should be treated differently from everyone else. From experience, Lara says, “Aboriginal people really respond to compassion and being loved. The responses might not always be the way that most might expect or want, but this could be due to some underlying problems. For example, when someone has been abused they find it difficult to love. When you’ve been ‘hunted’ it’s difficult to trust.”

Lara believes that most Australians think the problems are insurmountable, and so they don’t bother trying. But she says, “If we believe the Bible, then Australian Aboriginals are individuals whom God loves. Even a single life changed is one lost sheep restored to their Creator, even causing the angels to rejoice.”

She highlighted that there are lots of opportunities for people to serve in Aboriginal communities and it doesn’t have to be unpaid. They are desperate for teachers, nurses, plumbers, carpenters and electricians. There are even vacation programs that Christians can be involved in, which provide a great springboard for the local Aboriginal Christians to work from.4

Lara’s story once again provides ample evidence on how worldview makes a difference. Our views about where we came from ultimately affect the way we live our lives and the way we treat others. I thank God for Lara and her upbringing, and commend her efforts to reach the lost. 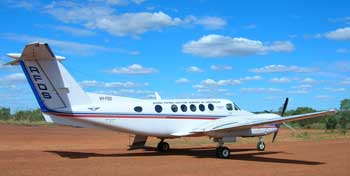 For 3½ years, Lara served with the RFDS (also known as the “Flying Doctors”). It is a world-renowned air ambulance service that provides emergency medical care for Australians living in remote locations. For some families, even a ‘drive’ to the local grocery store can take several days. The RFDS was formed in 1928 by Reverend John Flynn, the first Superintendent of the Australian Inland Mission (AIM), a branch of the Presbyterian Church of Australia.1 In some areas signs can be seen on remote Australian highways to alert drivers that the road sometimes doubles as an emergency landing strip for RFDS planes.

In June 2007, incumbent Australian Prime Minister, John Howard, declared a National Emergency and ordered teams of medicos and social workers, backed by the police and military, into many Aboriginal communities. This was due to a commissioned report that revealed extensive sexual child abuse within communities in the Northern Territory of Australia. It was revealed that health workers, teachers and even family members had been assaulted for speaking out for the abused.

Subsequently, many welfare payments have been diverted to food coupons, ensuring that the money is not spent on alcohol or drugs. The intervention included bans on alcohol and pornography, as well as compulsory medical examinations for all children under 16.1

On 13 February 2008, Australia’s Prime Minister, Kevin Rudd, issued a national apology for the treatment of his country’s Aboriginals, and in particular, for the removal of children from their families from the late 1800s to the 1960s. This was nationally known as “Sorry Day”. Lara readily admits that there have been problems, but also bemoans that the positive influence of Christian heritage has been rewritten. She says, “Scores of children were removed for their own safety, and many good loving families cared for them. But others, mostly those with some ‘white’ parentage, were removed in an attempt to breed out the Aboriginal ‘race’, and many suffered harm.” Lara attributes many problems to racist Darwinian ideas.