Without an inkling of any catastrophe about to strike, the fish of the pre-Flood seas went about their business of surviving, each in its own way. Bottom-dwellers and surface-feeders, many subsisting on microscopic plankton, shared the seas with larger predators, hungrily pursuing their prey of smaller fish.

These seas, probably shallower on average than today’s, would have presented quite a laden banquet-table for those restless hunters. Their plundering provided them with food, and also helped to contain the numbers and preserve the genetic fitness of the population on which they preyed.

Scenes similar to those in Figure 1 would have been an everyday happening, just as they are now. But how is it that we have available such a snapshot of this instant in time, preserved in limestone?

This powerful predator, Caturus furcatus, was patrolling his territory and noticed a rather careless smaller fish. The victim, seized by the tail, resisted being instantly gobbled. But eventually the powerful jaws of its attacker wrestled it into position to be swallowed head-first.

As this drama neared its end, with the smaller fish not yet out of sight and the hunter still in the act of swallowing, a rolling, catastrophic wave of mud, with tonnes of lime-rich sediment, came crashing in on both hunter and prey. In an instant, this crushing, suffocating blanket eliminated any possibility of further movement. An instant later, the last flicker of life in both the diner and his dinner was gone. What had begun as a tragedy for only one of the players became a double tragedy a moment later.

In the succeeding months, the entombed pair were, of course, oblivious to the many violent happenings above their limy grave. Other similar ‘turbidity currents’ were burying billions of sea creatures over thousands of square kilometres of ocean floor. Currents would occasionally re-erode some of these fresh deposits, transporting the material elsewhere. Other currents from various directions brought in different types of sediment. Some of these contained totally different types of sea creatures which had been killed at different levels and in different biological surroundings. For many types of such creatures, every representative had been wiped out. From now on their fossil remains would serve only to grace the museums of the future as extinct types.

As these layers built up, chemical cementing action was already solidifying the lime around our pair. If it had stayed sloppy for a long time, they would have turned into an unrecognizable, stinking mush. But the rapid hardening preserved the shape of these two just as they had been buried. Chemicals percolating through this fresh limestone over dozens, or even hundreds, of years, gradually replaced much of the material that the fish were made of, so that they also ‘turned to stone’ in exactly the positions in which they were killed.

Long before such ‘petrifaction’ was completed, violent earth movements raised this vast limestone cemetery to its present position well above sea level, tilting and buckling large chunks of it. Many centuries were to pass before a chance hammer-blow or quarry-charge was to reveal its silent testimony to rapid burial.

The specimen we have been referring to is from the famous Solnhofen limestone, of Germany, and is by no means a local phenomenon. Let us look at a few more examples.

From the other side of the ocean, the Brazilian lower chalk system shows another predator, Enneles audax, in a similar role. The concretion shown in Figure 4(i) (31 cm x 12 cm, found in Araripe) was split open to reveal details inside the mouth of the predator (Figure 4(ii)). This was because the plane of separation actually passed through the petrified parts inside. One can see the powerful teeth of the lower jaw. All indications are that the prey fish was seized tail first. This is what usually happens in a high-speed chase. However, many predators turn their prey around after capture to swallow it headfirst.

In this specimen, one can see headbones still in the mouth-region, and a part of a fin hanging over the edge of the lower jaw. Parts of the prey are already in the stomach of the predator.

Figure 5 shows another Enneles audax, which is in the process of overpowering an Aspidorhynchus. In this case the prey is itself a hunter of others. The angle of its body and the head of its captor suggests a vigorous attempt to escape being eaten, a moment also snap-frozen in time—and lime! 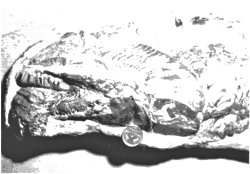 Of course, there must have been many such scenes among the billions of fish buried alive during Noah’s Flood. The small statistical chance of finding a good specimen at exposed locations on the surface correlates well with the fact that there are only about a dozen or so good specimens known worldwide (though doubtless a few more are lingering in dusty boxes in museum basements).

The global distribution of such occurrences of catastrophe is certainly consistent with the worldwide upheaval described in Genesis. Figure 6 shows another example, this time from North American rocks labelled as Eocene.

Such ‘interrupted meal’ fossil snapshots would have been much less likely for land creatures entombed in the Flood. Even a brief warning period of impending disaster would have meant that food would have been the last thing on their minds. However, even fish often would have had some form of ‘warning’. The underground water and chemicals released from the breaking up of the ‘fountains of the great deep’ described in Genesis would have occasionally been poisonous.

One locality in Lebanon contains unusually bent and twisted fish (Leptolepides serpentinus). One example also has prey in its mouth. Both this specimen and the others with empty mouths appear to have been affected by some form of muscular cramping just before they were buried.

Some shoals of fossil fish also give the impression by their disorderly array and unnatural cramped positions that they were affected by poisonous water shortly before being embedded.

Other explanations not so good

An example of how palaeontologists operating within the ‘orthodox’ framework of interpretation tend to explain such finds is seen in this quote from one, describing a pair of fossil Spathobiatis mirabilis.1

‘The male swam a few metres in front of the female, who tried to follow. But the water sank very quickly, so that both finally became stuck in the mud and perished. A zoological tragedy of 120 million years ago.’

But if that had happened, we would not now have the fossils he is describing—instead, the pair would have quickly decayed. The vast numbers of beautifully preserved fossil fish which we have all over the world thus testify to processes of rapid burial.

Readers should remember also that not all fossilization took place in the great Flood—the first few centuries after such an upheaval would also have been times of great regional catastrophes as the earth slowly ‘settled’ to new tectonic balances.

The model of global catastrophism, based on the authority of Scripture, fits the observations of the rocks very well in a broad sense. However, a vast amount of work needs to be done on detailed correlations, and creationist science is hampered by a chronic shortage of funding and workers. We must avoid apathy about these needs, and avoid the temptation to use a ‘god of the gaps’ approach to glibly explain away difficulties. That is, we need to avoid making the same errors as those evolutionists whose commitment to a non-biblical understanding has led them to such misinterpretations as, for example, insisting that these ‘double tragedies’ in the limestone resulted from slow and gradual processes.

Joachim Vetter, Med. Hab., Ph.D., has medical and biological qualifications, and is a frequent contributor to the Swiss/German creation-oriented magazine Factum. His special interest is the comparative anatomy of fossil and recent forms. Return to top.

Translated from German and adapted by Dr Carl Wieland.