Many parents have had trouble convincing their children to eat one of the members of the cabbage group of vegetables. This group includes cabbage, broccoli, Brussels sprouts, cauliflower, kohlrabi and kale. Most children do not rate these vegetables as their favourite flavour!

But these vegetables, some of the most nutritious of all, contain lots of minerals and vitamins, and antioxidants that greatly surpass the power of vitamins A, C and E—the antioxidants commonly available in vitamin pills. They also have substances that inhibit cancer cells.1 Clearly, vitamin pills cannot make up for the benefits of eating the real food that God created. Furthermore, you can eat ‘boatloads’ of these vegetables without getting fat—it sounds like many of us should be eating a lot more of them.

Sauerkraut, a German delicacy, is produced by alternating layers of cabbage and salt; acid fermentation quickly sets in, preserving the cabbage along with the vitamin C. Koreans have a similar food called kimchi. In the past, with the lack of fresh fruit and vegetables during the long European winters, sauerkraut helped people avoid scurvy.

Captain James Cook, who mapped the east coast of Australia in 1770, carried sauerkraut on his voyages to prevent scurvy in his crew.2

But where did these vegetables come from? Did Adam and Eve have Brussels sprouts in the Garden of Eden? Children might say, ‘No way—that doesn’t sound like Paradise!’

Interestingly, the extreme variety of types has arisen in the last two thousand years or so, by people selecting the various forms. They all belong to one species, Brassica oleracea. The original created type of cabbage was probably similar to kale or collards. Records of its use go back to the Greeks about 600 BC. Undoubtedly, its use goes back earlier; Adam and Eve may well have eaten it.

We cannot know for sure how the various forms arose (see table below). They probably arose spontaneously, either by recombination of existing genetic information or with mutations giving rise to the various forms.

For example, in the common heading cabbage, only one bud at the top of the stem—the terminal bud—produces leaves. There are other buds, one at the base of each leaf, but they do not develop unless the terminal bud suffers damage—say, by an insect eating it. Then one or more of these axillary buds develops.

In Brussels sprouts, the plant fails to suppress the growth of the other buds, and so each one becomes a little cabbage. It also has an elongated stem compared to the cabbage. It is easy to see how a mutation that damaged the mechanism in the cabbage that suppresses extra bud development could produce a Brussels sprouts plant.3

Such downhill mutations occur in plant and animals, but these will not change a cabbage into a banana plant—that requires the sorts of gross information-adding changes that evolutionists need to find to justify their claim that microbes changed into mangoes.

Such mutations would not increase the complexity of an organism; rather they mess up some part of its functionality. Other mutations could have created the deformed flowers of the cauliflower or broccoli. Such downhill mutations occur in plant and animals, but these will not change a cabbage into a banana plant—that requires the sorts of gross information-adding changes that evolutionists need to find to justify their claim that microbes changed into mangoes.

It’s all in the family

These plants belong to the family Brassicaceae. This family is also still widely known as Cruciferae, due to the crucifix appearance of the flower petals when viewed from above. The creationist founder of the science of classifying organisms, Carolus Linnaeus, gave names to many members of the cabbage family in the 1700s. Other well-known members include turnip and Chinese cabbages (forms of Brassica rapa), brown mustard (Brassica juncea) and radish (Raphanus sativus).

We get canola oil from the seeds of one form of Brassica napus. Unlike most plant oils, canola oil has a useful amount of a type of oil similar to that found in fish such as salmon and sardines. Eating fish-oil has healthy effects, reducing the risk of heart disease and symptoms of arthritis, for example.4 However, the health value of the canola form of the oil is unclear at this stage.5 We know another form of B. napus as swede, or rutabaga, which has an edible globe-shaped fleshy root.

Thale cress (Arabidopsis thaliana) is a favourite plant for laboratory experiments. It was the first plant to have its DNA decoded.

Farmers regard a number of this family as weeds. A weed is a plant growing where you do not want it to; like black mustard growing in a wheat crop. However, people around the world used this plant to produce mustard before the modern use of brown mustard for this purpose—the latter suits mechanical harvesting better.

The presence of black mustard seeds as contaminants in wheat, for example, probably contributed to its distribution around the world in the dispersion following the Tower of Babel.

Jesus compared the kingdom of heaven to a mustard seed growing into a tree (Matthew 13:31–32). Since today’s mustard is an annual herb, some have proposed that the mustard of Jesus’ parable must have been a different plant. However, the Greek word used in the Gospels is sinapi, from which we get Sinapsis, one of the genera in Brassicaceae, and known as white mustard. The plant Jesus referred to was probably black mustard. It germinates rapidly and grows very quickly into ‘the largest of garden plants’—to the extent that birds can ‘perch in its branches’.6

Table. Various forms of Brassica oleracea; their origins and characteristics.1

1. Grouping from Gómez-Campo, C. (Editor), Biology of Brassica Coenospecies, Elsevier Science B.V., p. 316, 1999, with the addition of kohlrabi. Other plant scientists divide B. oleracea into up to 12 varieties or subspecies, by splitting kale and collards, for example.

Certainly, the vegetables listed in the table have all come from an original cabbage type. The scientific name reflects this, all belonging to the same genus and species, Brassica oleracea. That cabbage type itself may have been part of an original broader kind, encompassing all members of the Brassica family.

The degree of variation within this family could be partly due to a tendency to undergo spontaneous chromosomal rearrangements. Such rearrangements in animals usually result in death, but many plants can tolerate them.

Many of the different Brassica species readily form natural hybrids when planted together, the pollen being transferred by insects or wind. Plant breeders have recreated some of the ‘species’ of Brassica by hybridizing other species (see diagram above).

For example, planting cabbage together with turnip produces some seeds of rutabaga. Planting cabbage and black mustard together gives some seeds of Ethiopian mustard. Planting turnip and black mustard together produces some seeds of brown mustard. These examples show that we should not view modern day ‘species’ as the ‘kinds’ that God created on day three of Creation week. At the very least, these three species of (the genus) Brassica arose by hybridizing existing species. These hybrids involve the crossing of plants with different chromosome numbers (see Chromosome gymnastics below for details of how this happens).

Now many plants can do this, but it is rare among animals. Animals seem to be a lot less tolerant of having extra chromosomes—in humans an extra chromosome 21 results in Down’s syndrome.

Different numbers of chromosomes is a major barrier to hybridizing different kinds, especially animals. This is one way that God ensured that His created kinds reproduced ‘after their kind’ (Genesis 1 uses this expression 10 times).

We can also see the unity of the brassicas in the way that people have used different species to produce mustard (B. nigra, B. juncea or B. carinata, B. rapa) or oil (B. rapa, B. napus) or various forms of cabbage (B. oleracea: cabbage, kale, etc.; B. rapa: Chinese cabbage and pak choi, etc.).

The ability of brassicas to hybridize means that scientists have to take great care to prevent genetically modified plants from pollinating weedy species of the family. If black mustard gained genes for herbicide resistance, from genetically modified canola, farmers would have greater problems controlling the weed.

Even different genera within the family often produce a small number of hybrid seeds. Plant breeders crossed a radish (Raphanus) with a cabbage (Brassica), hoping to get a plant that produced an edible radish-like root with a cabbage top. They did create this hybrid, dubbed Raphanobrassica,7 but unfortunately it had a cabbage-like root and a radish-like top! Research often results in disappointments—a good scientist needs patience.

Plant breeders have hybridized many other members of the Brassicaceae—different genera to Brassica.8 (See box below.) This suggests that the whole family might derive from an original created brassica-kind that God created on Day 3 of the Creation Week. Note this is not evolution as it is not an uphill ‘bog slime to Brussels sprouts’ process, but a downhill ‘brassica to broccoli and Brussels sprouts’ process. For example Brussels sprouts, being much more selected and specialized than black mustard, is more prone to disease and is less ‘fit to survive’ (black mustard is a common weed). Note that all the brassicas are still brassicas—reproducing ‘after their kind’, just as they were programmed to do (Genesis 1:11–12).

This group of plants can grow in a wide range of conditions and produce a vast array of nutritious foods. We can thank God for His creative provision for us—even if our children might have to develop adult taste buds before they appreciate some of them! 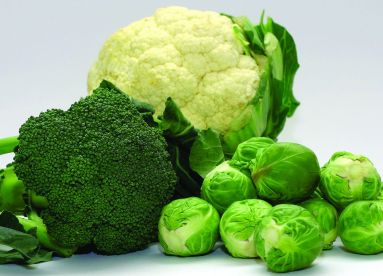 Creatures Do Change But It's Not Evolution
US $10.00
DVD
Frankenstein Foods & Fetuses
US $5.00
MP4 Video