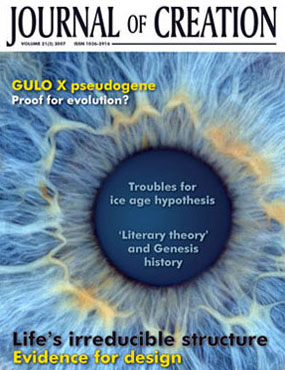 by Jerry Bergman and Wayne Frair

The fossil record is rich with many well-preserved turtle shells and a wide variety of turtles ‘dating back’ to before the dinosaurs in the Triassic. Phylogenetic analysis of turtles has resulted in much controversy and conflicting results that vary depending on the techniques used. Molecular evidence also contradicts previous evolutionary classifications based on gross morphological comparisons. The extant evidence shows that turtles appear in the fossil record fully formed.

Turtles are ideal animals for testing evolutionary ideas because some of their most unique structures, such as their hard shells, preserve extremely well in the fossil record. What also makes turtles perfect candidates for studying evolution is that their body plan is unique among tetrapods, and would require ‘some remarkable changes in the skeleton and internal organs’ as they evolved from a typical tetrapod to a carapace-plastron clad turtle.1,2 An example is that the scapula of vertebrates is outside the rib cage, but in turtles the scapula, the humerus and several other bones are all inside of the rib cage.3 Moreover, breathing is very different compared with other reptiles because the turtle chest is not distensible.4 Therefore, if turtle evolution were true, we would expect the fossil record to provide a better record of intermediate morphologies than for many other vertebrates. However, the evidence for such ‘missing links’ is still missing.

With Proganochelys [the ‘oldest’ known turtle], our trail into the past runs cold. We do not know from whence it came.—evolutionary turtle expert R. Orenstein.

Extensive fossil turtle deposits extending back to the Triassic5 have been found throughout the world, including Germany, India, Thailand, South Africa, North America and China.6 The earliest known turtle, named Proganochelys and discovered in Germany in the 1880s, was dated by evolutionists to 210–220 million years ago. The specimens had a shell consisting of 60 plates of various sizes, and a carapace up to 1 m long. Its skeleton was ‘characteristic of turtles—carapace, plastron, scapular girdle inside the rib cage (unique among vertebrates).’7

This primarily aquatic turtle possessed ‘cervical vertebrae with well developed acuminate, spiny apophyses—making it impossible for the turtle to retract its head’ to protect itself.8 Most known modern turtles can retract their heads (a major exception are sea turtles). No intermediate forms between these first turtles ‘and any other reptile, living or extinct’ has ever been found:

‘With Proganochelys, our trail into the past runs cold. We do not know from whence it came. We may be not be much closer to knowing today than we were more than a century ago, in the 1880s, when Proganochelys was first discovered … the possible choices for the original turtle span almost the entire range of reptiles, living and extinct.’9

‘ … appear abruptly. … A great many sequences of two or a few temporally intergrading species are known, but even at this level most species appear without known immediate ancestors, and really long, perfectly complete sequences of numerous species are exceedingly rare.13

The abundant turtle fossil record supports the conclusion that turtles have remained ‘unchanged for at least 150 million years.’14 Flank concludes that ‘Turtle fossils are found more often than other animals of similar size, and the evolutionary history of the modern turtle is fairly well known’ except the earliest turtle ancestors and, as a result, ‘the exact ancestry of living turtles is disputed among paleontologists.’15

Another question evolutionists are unable to answer is: did the various families of chelonians evolve from some common ancestor or by parallel or convergent evolution? One theory is that sea turtles evolved from land turtles, requiring significant evolutionary changes to adapt to the sea. For example, sea turtles filter salt from sea water by producing large salty tears. Feet must evolve into flippers, requiring extremely elongated phalanges. Yet not one transitional sea turtle fossil has been found.16,17 However, the consensus among herpetologists is that

‘ … the evolutionary position of turtles with the amniote phylogeny has eluded evolutionary biologists for more than a century. This phylogenetic problem has remained unsolved partly because turtles have such a unique morphology that only few characters can be used to link them with any other group of amniotes.’18

Proganochelys ‘literally pops into the fossil record as a completely formed turtle.’—J.R. Spotila

Another hypothesis postulates that modern turtles evolved from the Chelidae, a ‘primitive’ side necked turtle unique to Australia and South America.19 Other herpetologists argue for a placodont ancestor, especially a Henodus because of its turtle-like appearance. Since there are many phylogenic problems of postulating turtle evolution from a Henodus, others speculate that the similarity of turtles and Henodus is explained by convergent evolution.20 As Rieppel and Reisz conclude, ‘Turtle relationships remain labile, and further investigations of their relationships are required.’20

Many evolutionary trees exist, all based largely on speculation rather than fossil evidence. So far, no convincing evidence exists for any view.

Evolution of the turtle shell

[The] problem for an evolutionary biologist is to explain these transformations in the context of a gradualistic process.—O. Rieppel, who supports a ‘hopeful monster’ explanation

Because of the lack of fossil intermediates, evolutionists have to resort to speculative hypotheses to rescue to fit turtles into evolution. One hypothesis is that the turtle carapace gradually evolved from ‘elements of the primitive reptilian integument.’21 Reptile expert Olivier Rieppel argued that a big ‘problem for an evolutionary biologist is to explain these transformations in the context of a gradualistic process.’3 Rieppel argues that turtles could not evolve by a gradual process, and concluded that they may be an example of ‘hopeful monsters’.3

More recently Gilbert and his associates22 have proposed a theoretical embryological model involving movement of the ribs into the dermal layer leading to the evolution of a turtle shell. This modeling, although useful, cannot replace the need for paleontological evidence.23

It is also theorized that ancient turtles possessed teeth but lost them. A good example is that Proganochelys had midpalatal homodont ‘teeth’ which were actually small denticles formed by the development of a tough covering over some of the bones of the palate (which modern turtles lack), yet was otherwise similar to modern turtles. The evolution of teeth is the problem evolutionists have to deal with and, conversely, the loss of teeth would be expected in the biblical model of the Fall which predicts corruption of the genome and the accompanying deterioration of the phenotype. A mutation could easily have occurred in one of the ‘tooth’ development genes in turtles that disabled tooth maturation but still allowed the animal to survive. If it proved beneficial for its specific feeding habits, it may even be selected for as a result. Loss of teeth has evidently occurred several times in history in animals, including possibly some birds, and certain monotremes such as the platypus.

Moreover, this provides no solace for evolutionists because such a process results in a loss of genetic information, not the addition of completely new information that the evolution of turtles from their putative ancestors requires. Because of their genetic constitution turtles have produced a great range of morphologies. Their wide genetic variation allows the creation of variety both through careful breeding and by various natural mechanisms. Moreover, fossilized turtles prove that far greater chelonian diversity existed in the past than is found today.24

Researchers, disappointed with the lack of progress in understanding turtle evolution, have increasingly looked to molecular and physiological studies to solve this evolutionary enigma.25 However, comparisons of turtles have conflicted with the hypothesized phylogenies based on gross morphological comparisons.26

Hedges and Poling assembled all of the known genetic data available in order to resolve the controversy. According to their analysis of the largest available collection of reptile genes, turtles have been found by genetic studies to be the closest relatives of, not birds as once believed, but rather of crocodiles and alligators. They concluded that ‘The results provide strong evidence that the turtle is the crocodile’s closest living relative.’27

‘The study’s conclusions contradict decades of research based on anatomical and fossil studies, which had firmly positioned birds as the reptile group most closely related to crocodiles and alligators, a group known as crocodilians.’27

‘ … the living sister group of turtles, whereas morphological studies support lepidosaurs (tuatara, lizards, and snakes) as the closest living relatives of turtles. Accepting these hypotheses implies that turtles cannot be viewed any longer as primitive reptiles, and that they might have lost the temporal holes in the skull secondarily rather than never having had them.’18

After a study of nuclear DNA-coded proteins, Iwabe, et al. (2005) also concluded that turtles belong to a monophyletic cluster including birds and crocodiles. They emphatically stated that, ‘All other possible tree topologies were significantly rejected.’28

Turtles are an ideal life form for evaluating the evidence for evolution, not only because their shells are readily preserved but also because of the abundance of turtles in the fossil record. Yet no evidence ever has been found in support of the evolution of turtles from a non-turtle ancestor in spite of over a century of extensive fossil explorations and the identification of many thousands of fossils.

‘Turtles are so different from any other reptile that their peculiarities are practically useless as a guide for distinguishing among potential ancestors, and the origin of turtles remains one of the great unanswered questions of evolutionary biology … the possible choices for the original turtle span almost the entire range of reptiles, living and extinct.’9

The origin of turtles has long been, and continues to be, a major evolutionary enigma. The oldest known turtles clearly were turtles. Since turtles appear abruptly in the fossil record, the current data are consistent with a creation event followed by considerable diversification coupled with degeneration.

We wish to thank Eric Blievernicht, Jody Allen and Clifford Lillo for their helpful comments.