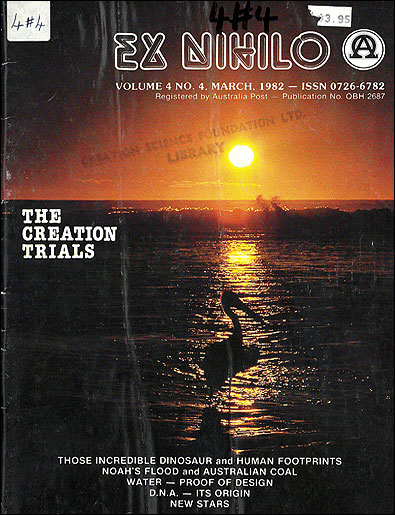 Evolution as a religious system has been adopted by many students, scholars and laypeople as a way to explain the origin and the development of the cosmos and all life including man. They are building their lives on the following beliefs:

The implications of these religious beliefs on Christianity have not been overlooked by the non-Christian. In his book Before Civilization, Professor Colin Renfrew, commenting on the impact of Darwin’s original statement of the General Theory of Evolution, writes

With his [Darwin’s] Descent of Man, published in 1871, the theory was complete: a new model of human origins had been constructed which could replace the fundamentalist biblical one. Man was not a unique creation at the hand of God, but the product of a long evolutionary process; he evolved from the same humble marine ancestors as the rest of the animal kingdom.

In Science Ponders Religion, Curtly Mather of Harvard University views the impact of evolution on Christianity in this respect:

‘When a theologian accepts evolution as the process used by the Creator, he must be willing to go all the way with it. Not only is it an orderly process, it is a continuing one. Nothing was finished on any seventh day; the process of creation is still going on … Moreover, the creative process of evolution is not to be interrupted by any supernatural intervention … The spiritual aspects of the life of man are just as surely a product of the processes called evolution as are his brain and nervous system.’

Thus there was no historic Adam and Eve who were sinless creatures created in the image of God. There was no historic Fall of mankind because of original sin. Death was not a penalty of sin, since death has always been an inseparable part of life from the beginning. And what of the atoning work of Christ on the cross? His death is not needed because the process marches onward and upward. So would argue the evolutionist.

Sir Julian Huxley, evolutionist and biologist, states his faith in this way, ‘For my own part, the sense of spiritual relief which comes from rejecting the idea of God as a supernatural being is enormous… Darwinism removed the whole idea of God as the creator of organisms from the sphere of rational discussion.’ As geneticist and evolutionist Theodosius Dobzhansky metaphorically announces,

‘Evolution is a light which illuminates all facts, a trajectory which all lines of thought must follow. ’

Is it because evolution is a religious system built on individual faith that makes its proponents so fervent in their support? No matter how compelling, how complete the evidences against the General Theory of Evolution may be, or how impressive the evidence for the biblical account of creation and the Flood-Judgment, the community of secular scientists will never concede the fundamental fallacy of their religious system in favour of Scripture. Why? To accept the Creation model or the Flood-Judgment model as viable scientific models would also require the acceptance of the Creator Christ Jesus, and this they cannot do. ‘Our faith in the idea of evolution depends on our reluctance to accept the antagonistic doctrine of special creation’, says the evolutionist.

Dr. Loren Eiseley in his book The Immense Journey has summarised his position and the position of his colleagues in this way: ‘After having chided the theologian on his reliance on myth and miracle, science found itself in the unenviable position of having to create a mythology of its own: namely, the assumption that what after long effort, could not he proved to take place today had, in truth, taken place in the primeval past.’

Evolution makes religious claims on the basis of a presumed flow of history. It is a religious system which is against Christ and His church. One system of faith denies the other. Evolution is a contemporary creation myth, not really so different from the creation myths of the ancients. In evolution the names of the gods are shrouded in the scientific jargon of the age and culture.

By contrast, the creationist who believes that the Bible is inerrant revelation from God about God, must then believe that the God who created the universe, life and man, is capable of communicating the significant details of this event. To relegate the first eleven chapters of Genesis to mythology is to deny the Creator this ability to communicate. The Word of God makes religious claims in conjunction with historical claims. Jesus illustrated this inseparable linkage when He asked Nicodemus, ‘You do not believe me when I tell you about the things of this world; how will you ever believe me then when I tell you about things of heaven?’ (John 3:12).

Any truth that is known concerning what has happened in history is contained in the Messiah, the Son of God. All knowledge must be Christ-centered. To the degree that any man knows truth, to that degree he has encountered Jesus Christ, the Son of God.

Professor Peter Medawar has had this to say about a fellow evolutionist, Karl Popper,

‘I think Popper is incomparably the greatest philosopher of science that has ever been.’ What does Popper have to say about evolution? In his autobiography Unended Quest, Karl Popper writes, ‘I have come to the conclusion that Darwinism is not a testable scientific theory, but a metaphysical research programme—a possible framework for testable scientific theories … This is of course the reason why Darwinism has been almost universally accepted. Its theory of adaptation was the first nontheistic one that was convincing; and theism was worse than an open admission of failure, for it created the impression that an ultimate explanation has been reached.’

Karl Popper views evolution not as a science, but as a ‘possible framework’ on which to build ‘testable scientific theories’. Creationist academics have successfully argued that their belief system is a better framework upon which to build scientific theories. Theories, for example, concerning the development of speech capability and the proliferation of the various languages will be constructed totally different depending on whether the investigator begins from Scripture or the evolutionist worldview. The decision the scientist must make is upon which framework to build his theories—the framework communicated by God to man, or the framework built by man to avoid the need for God. The scientific theories of both the creationist and the evolutionist are subject to the accuracy of their respective assumptions of origins. If the framework is myth, what are the theories derived from the framework? Should they be considered no more than merely embellishments of the original myth? Is the ‘ultimate explanation’ found in evolution as contemporary man insists, or is the ultimate truth revealed in the Scriptures that Popper and his friends have rejected? As the Scriptures testify, ‘Ever since God created the world, his invisible qualities, both his eternal power and his divine nature, have been clearly seen; they are perceived in the things that God has made. So those people have no excuse at all! They know God, but they do not give him the honor that belongs to him, nor do they thank him. Instead, their thoughts have become complete nonsense, and their empty minds are filled with darkness. They say they are wise, but they are fools; instead of worshipping the immortal God, they worship images made to look like mortal man or birds or animals or reptiles.’ (Romans 1:20–22)

‘Darwin argued that all species evolved in gradual fashion, leading to man. But some experts now contend evolution occurred in relatively sudden leaps’, reports Newsweek (November 3, 1980). In the periodical Science (August 22, 1980) we read, ‘The sudden disappearance of more than 70 percent of all living species on land and in the ocean 65 million years ago, at the end of the Cretaceous Period, is a major event in the history of the earth … Hypotheses proposed to explain the terminal Cretaceous extinction include:

Why, after over one hundred years of evolutionist theory of gradual change, is there the necessity for ‘sudden leaps’ and ‘sudden disappearances’? What current events have driven some evolutionists to search for catastrophic episodes with which they feel they must fortify their position? Could a major reason be that the Word of God is penetrating areas into which it has too long been thought impotent and irrelevant?

Christians with scientific and technical training are rediscovering that the Word of God is not a hazy Jewish myth, but is today still sharper than any two-edged sword destroying the false dogma and the contrived doctrines of men. Evolutionist Beverly Halstead writes in New Scientist (July 1980): ‘Palaeontology and the theory of evolution are under attack from a curious variety of sources. There has been a recent upsurge of books and articles condemning the idea of evolution and the fossil record in particular, while at the same time urging a return to the revealed truth documented in the Bible. This new generation of fundamentalist tracts differs from its predecessors in the level of sophistication. Moreover, for the first time the tracts’ views are receiving a sympathetic echo from the British Museum [Natural History] London.’

With increasing rapidity the evolutionists are having to abandon the position of gradual upward development occurring over eons of time. The data being discovered in the fossil record can no longer be relied upon to defend the process of gradual change. It is the fossil record on which the General Theory of Evolution most heavily rests. Fossils are mostly the remains of creatures and plants which died and were suddenly buried in such a manner as to be preserved as an impression in stone or as casts where minerals have replaced the organic structures. The numbers and types of animals and plants preserved as fossils attest to a sudden and cataclysmic burial: the preservation in stone of a butterfly’s impression with the delicate markings on its fragile wings still visible; or the fossilised remains of two small dinosaurs which were frozen in battle, preserved in stone by a flood of sediment which suddenly overtook them. The gradual processes of the General Theory of Evolution and the cataclysmic fossil record cannot be reconciled. In order to salvage the evolutionary theory, more theories explaining the sudden appearances of living species must now be brought into existence.

As new scientific discoveries are made and as new facts emerge, the General Theory of Evolution will continue to be changed; of this we can be certain. We can also be certain that because the Word of God is true, the biblical account of the Creation and the Flood-Judgment will continue to be illuminated in such a way as to testify to the glory of God.