Charles Darwin wrote: ‘No organism wholly soft can be preserved’1—understandably so, given his presupposition that the world’s fossil-bearing rock layers resulted from slow-and-gradual processes over long periods of time. Thus he expected that only the remains of animals with hard parts (such as bone or shell) would ever be found as fossils.

But, as the subsequent discovery of many fossilized jellyfish shows, Darwin was wrong.2

And now researchers report finding ‘exceptionally preserved jellyfishes’ among the ‘diverse biota of soft-bodied taxa’ and other fossilized creatures at the Sponge Gully Locality in Utah, USA.3 They say that the jellyfish fossils ‘display exquisite preservation of soft part anatomy’3—so exquisite in fact that ‘you can see a distinct bell shape, tentacles, muscle scars, and possibly even the gonads.’4

Such exquisite preservation of ‘trailing tentacles’ and other jellyfish organs speaks not of slow-and-gradual processes [see photo caption], but of rapid burial. And that, coupled with the worldwide distribution of fossils, is consistent with their having been buried in the global Flood of Noah’s day, around 4,500 years ago.

Sadly, the evolutionary researchers involved in this latest discovery are ignoring or are unaware of the Genesis Creation and Flood account (2 Peter 3:3–6). Instead they’ve tried to interpret their find from an evolutionary perspective, ‘dating’ these jellyfish fossils from Cambrian strata as being 500 million years old—making jellyfish more than 200 million years ‘older’ than evolutionists had previously thought. Yet, as the researchers themselves point out, the fossil specimens resemble jellyfish living today, such as species from the genus Cunina, and Periphylla. Why no evolution in all that (supposed) time? 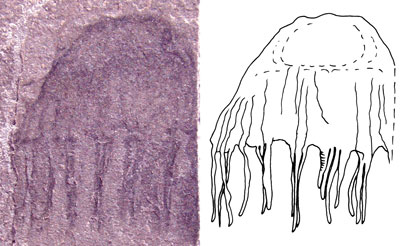 Getting it wrong: One of the photos in the research paper by Cartwright et al.,1 along with the adjacent interpretive drawing of a cnidarian jellyfish in lateral view. The researchers intimated that the way this jellyfish became so beautifully fossilized in Utah, USA, is likely similar to how myriad creatures (including soft-bodied organisms) came to be preserved in the famous Burgess Shale in Canada. That is, anoxic conditions (i.e. lacking in oxygen), at the bottom of supposedly tranquil waters where the jellyfish were, prevented the creatures rotting away while they were slowly covered by fine sediment—layer upon layer. But surely such exquisite preservation—to the point that the researchers were able to liken the fossil pictured here to living species from the genus Cunina2 —required fast envelopment in sediment, not slow. And, indeed, evolutionary scientists have recently done an about-face on the Burgess Shale—they now say the layers of fine sediment were deposited in a rush.3,4