Previously, I examined the roots of the Templeton Foundation, the philosophy of its founder, Sir John Marks Templeton, and the way in which his philosophy is being disseminated through the foundation’s ongoing efforts.1 The BioLogos Foundation and the Canadian Christian and Scientific Affiliation were mentioned as groups that receive Templeton Foundation funding to support their work.

And an examination of the nature of the grants that the foundation provides, as well as the purpose behind these grants, is telling indeed.

Other grants have been made to train Roman Catholic teachers and preachers to engage the dialogue between science and religion, to promote ‘science’ engagement in rabbinic training, and to measure science engagement in Roman Catholic high schools and seminaries. Further investigation into the nature and purpose of these grants reveals a common thread. For example, La Jolla Presbyterian Church received a grant from the Templeton Foundation for a program that “seeks to engage young adults (college and post-graduate) in a discussion of science and faith with leading scientists who are Christians”.

The McGrath Institute for Church Life at Notre Dame University received a $1.675 million grant for their Science and Religion Initiative, which “seeks to frame science education within the broader context of Catholic theology”. According to the institute’s director, “The perceived conflict between science and religion is one of the main reasons young people say they leave the Catholic church… this grant allows us to address this misperceptions and help high school teachers create pedagogies that show that science and religion—far from being incompatible—are partners in the search for truth.”

Multnomah Biblical Seminary has received a Templeton grant (as well as a grant from the American Association for the Advancement of Science, itself supported by the Templeton Foundation), to “equip pastoral studies majors to become more effective in engaging our scientific age”. Among a number of other Christian theologians, Niels Henrik Gregersen, professor of Systematic Theology at the University of Copenhagen, received a Templeton research grant for his work on the constructive interface between science and religion.

Another recent recipient of the Templeton Foundation’s largesse is Regent College in Vancouver, which this year received a grant funding a program called “Re-faithing Science at Regent College”. The program will seek, over the next two years, to address this question: “How can the relationship between Christian faith and scientific endeavour be conceptualized and communicated in a way that effectively engages diverse audiences?”

The detailed description of this particular grant on the Templeton Foundation website is insightful:

“Sir John Templeton recognized that science and spirituality should be neither sealed in separate boxes nor positioned at opposite ends of a battlefield, yet even a cursory glance at contemporary culture reveals that the supposed incompatibility and even hostility between faith and science is something of a truism in much of Western society. Regent College believes that this widespread perception is a significant threat to the development of theology and science alike, as well as to the spiritual and intellectual flourishing of countless individuals.”

So, utilizing Templeton’s funds, Regent College’s project team will “propose an alternative model for the relationship between faith and science: mutual coinherence, or existence within one another”. Their goal is to communicate this proposal “in an accessible form” that will encourage and enable further exploration of science, theology, and their interaction, using academic publications, public lectures, graduate-level courses, and an online presence, to “target different audiences with the same basic narrative, a story of one world, created by one God, who can be known and worshipped through both theology and science—and who is best known and best worshipped when theology and science work together”.

What can we learn from all of this? If we were unaware of the foundational principles behind the Templeton Foundation, perhaps all of this would appear to be somewhat innocuous. After all, who could argue against Christians being involved in the sciences? Why oppose efforts aimed at developing ‘scientific awareness’? Certainly we shouldn’t want to bury our heads in the sand, and ignore what the sciences have to offer, as if science were somehow ‘off-limits’ to the faithful Christian, should we?

But remember this important fact: the Templeton Foundation has a very clear agenda—a utopian, panentheistic philosophy that has an ecumenical goal of uniting the religions of the world around a synthesis of ‘science’ and religion, with ‘science’ seated firmly in the driver’s seat in this relationship.

But remember this important fact: the Templeton Foundation has a very clear agenda—a utopian, panentheistic philosophy that has an ecumenical goal of uniting the religions of the world around a synthesis of ‘science’ and religion, with ‘science’ seated firmly in the driver’s seat in this relationship. This agenda is being promoted by the lavish dispersal of funds to Islamic, Roman Catholic, Jewish, and other religious organizations, including, sadly, many evangelical Christian groups.

Two popular sayings come to mind: “Follow the money,” and “He who pays the piper calls the tune.” The money trail leads us to Sir John Marks Templeton. And clearly, Templeton’s agenda is making headway in many places, although it is also clear that this agenda faces many obstacles.

First of all, there is reluctance to accept the premises of this movement among religious organizations, as can be seen from the numerous grants being made to support efforts to decrease the resistance of religious leaders and members of religious groups, including evangelical Christians, to this religious/scientific paradigm. But that reluctance is being overcome, as the Templeton agenda makes inroads through a judicious use of funding. Efforts to reach youth, and those who teach the young, are effective means of dissemination for any propaganda effort, whether political, cultural, or religious in nature. Young people are more easily influenced, and they are most definitely being targeted, in a well-funded, concerted effort.

But there is also resistance from the other side—from unbelieving scientists who reject all religion, any idea of transcendence, and the idea that anything exists beyond the physical. This group is also being addressed by the outreach efforts of the Templeton Foundation, as it works toward fulfilling its long-term goals.

A spiritual war is being waged against God’s people, using that ancient question, “Has God really said?” This is not novel; every generation of Christians has faced this reality, in different ways at different times in history. The battle is being played out in a world in which money talks, and a lot of money talks loudly. We cannot afford to be naive on this issue. We need to be on our guard against the influence of the Templeton Foundation’s money, even if it’s being spent by organizations that may have been respected among us. That money is being spent to promote an agenda that is radically different from the agenda of God’s kingdom. Our allegiance to the One True God must lead us to reject alliances with organizations like the Templeton Foundation, whose agenda is completely incompatible with that of our great God and Saviour, Jesus Christ.

This article was original published on creationwithoutcompromise.com. Published with permission.

CMI rarely publishes articles already published elsewhere, but sometimes we do when we believe that an article warrants wider exposure. 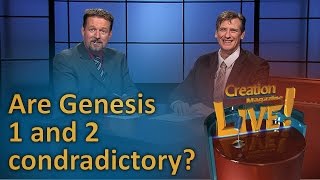