During winter in Alaska, the wood frog (Rana sylvatica) freezes so that it looks like a frog-shaped piece of ice. While frozen, the frog stops breathing, its heart stops beating, its blood stops flowing, and it cannot move.1 However, when spring arrives, the frog’s body thaws and the frog returns to normal life. This is an amazing feat that would certainly be highly unlikely to have developed by chance. To restart the function of the frog’s systems after they have been frozen requires extremely complex genetic programming.

The adult wood frog, which grows to be only about 8 cm (3 inches) long, has an unusual colouration on its face that makes it look like it is wearing a black mask. The frog lives in Canada and also in the United States from Alaska to Alabama.2 In Alaska, wood frogs inhabit diverse environments, from grasslands to forests, muskegs3 and tundra.4 The wood frog is one of only three species of frogs that live north of the Arctic Circle.

As an amphibian, it is a cold-blooded animal whose body temperature tends to match the temperature of its surroundings.5

The summers are usually warm and pleasant in Denali National Park, which is in the interior of Alaska. This provides a wonderful environment for the wood frogs because there are many insects, such as mosquitoes, and other small animals to eat. However, Alaskan winters in this area are severe. The average January air temperature at the Denali National Park headquarters is –17°C (2°F). The coldest temperature recorded there is –48°C (–54°F).6

Animals living in this part of the world have different ways to survive the extremely cold winters. Most birds migrate to warmer climates. Some bears and other animals hibernate in their dens. Other animals move about the land because their bodies have adequate insulation to protect them from the freezing cold. However, the wood frog does not escape or fight the cold. Before the severe winter arrives, the wood frog stores glucose in its liver. When the frog’s feet begin to freeze, its liver releases lots of glucose into its blood stream.7 Much of this glucose enters the frog’s cells and acts like antifreeze to prevent them from freezing.8

During winter, 35–45% of the water in the frog’s body freezes.10 This extracellular ice is mainly beneath the skin and between the muscles.1 This makes the frog as stiff as a lump of ice! Most of these frog-shaped ‘blocks of ice’ survive the Alaskan winter in these ground-level dens.11

When the spring thaw arrives, the wood frog accomplishes a truly remarkable feat. In only a few hours, the frog’s frozen body revives, resuming normal breathing with a beating heart, circulating blood, operating brain, and functioning systems. It is able to move, jump, and mate.12

Some people who believe in evolution say that the wood frog is a biological conundrum—the Rip van Winkle of the animal world.13

This remarkable ability of the wood frog to survive being frozen has inspired some people to believe that human beings, or at least some of their organs, can be frozen and eventually brought back to life.13 Whether this is possible or not remains to be seen.

The wood frog’s genetic programming is designed to allow it to live successfully in a climate with extremes in temperature. Without the ability to survive freezing, the wood frog would not be able to inhabit this area of the world. Scientists have discovered some of the ways in which the wood frog accomplishes this remarkable feat.14

For the ability to survive being frozen to have happened by chance through random and accidental mutations via natural selection would truly be incredible. Rather, it speaks of creative genius. God created the earth to be inhabited (e.g. Genesis 1:22), so it would make sense in his foreknowledge to create creatures with the capacity to adapt to the various environments that would occur. The Ice Age that developed after the Flood would have created areas where only frogs that were freeze-resistant could live.


Some details … the frog created kind and freeze tolerance 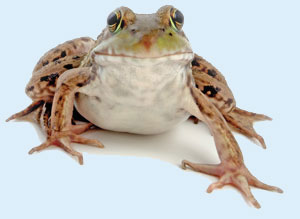 There are several species of freeze-resistant frogs. At least one unique gene is involved, which codes for a 390-amino-acid protein in the livers of Rana sylvatica, Pseudacris crucifer and Hyla versicolor, but not in non-tolerant species of Rana, for example.1 The freeze-tolerant species come from at least two different families—Hylidae and Ranidae in the suborder Neobatrachia of the frog order, Anura.2 Most other members of the families represented are not able to tolerate freezing conditions.

What does this say about the original created frog, around 6,000 years ago? Was there an original created kind, today represented by the sub-order Neobatrachia, from which all the current freeze-tolerant types have descended, with loss of the ability in most other members of the same genera / families? This is possible. The ready hybridization of many frog species suggests that the created kind falls at or above the level of family.

All frogs have a high degree of similarity, which makes classification difficult. As one research team said, ‘all frogs are characterized by a somewhat limited morphological variability’.3 The confusing pattern of similarities in the many families of frogs within the Neobatrachia has led to many and varied classification systems. As one article on frogs says, ‘relationships among families are still debated’.4

The diversity we see today could be partly due to a range of frogs surviving outside Noah’s Ark—the wide geographic distribution today of so many frog families suggests this.