Microscopes are marvellous modern-day tools. You may not own one yourself, but they are used daily for many processes to help you live better. They can help check your blood for disorders or your food for pathogens, to perform intricate brain surgery if you need it, and to manufacture myriad electronics which you probably take for granted. 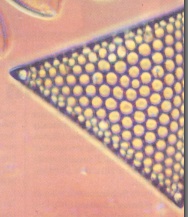 Scientists who use microscopes in their work often refer to microscopic life as ‘primitive’. Bacteria, protozoans, dinoflagellates and other single-celled organisms are often described as the ‘precursors’ to the more complex multicellular life-forms with which we are most familiar today. Most people do not have access to powerful microscopes to see these things for themselves, so they usually take scientists at their word. But how ‘primitive’ is microscopic life? Has the microscope really shown it to be such?

If you visit a lead-crystal shop, and admire all the beautiful hand-cut products on display, you may marvel at the craftsmanship it took to produce that crystal. The patterns are delightful to look at and the light glistening through the crystal makes it sparkle.

We like to think that, as intelligent human beings, we have the ability to recognize the intelligent design and engineering in the crystal object. You can see evidence of intelligent design in the straight lines, or beautifully symmetrical curves and geometric shapes cut in to the glass. And you would never suggest to the shopkeeper that the crystal objects on his shelves are products of chance, or of the random mixing of glass and lead over millions of years. He would probably show you the door if you did.

Diatoms are extremely tiny plants (only about one-quarter the diameter of a human hair), found in the drifting plankton of the oceans. They are marvels of complex architectural engineering. They have the unique ability to fashion intricate glass-houses for themselves by using the silica found naturally in sea-water. Not only are they intricately built, but they are found in all known geometrical shapes and are symmetrical in three dimensions, having perfectly matched tops and bottoms that are held together until the plant dies and the two halves come apart. 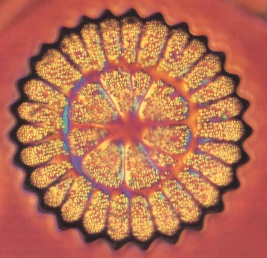 Very rarely in biological systems do you find the use of straight lines for structural support. But diatoms are masters, not only at straight lines, but also at circles (Figs. 1 and 2), stars (Fig. 3), triangles, squares, and ovals.

How did these tiny plants develop the ability to design and manufacture such intricate shapes? If mutations and natural selection were the driving force in producing these structures, what possible competitive advantage would a diatom have in being a perfect triangle? It seems to me to make far more sense to accept that the Master of geometrical design created these marvels on the third day of Creation Week when He called all the plants into existence.

Diatoms are among the primary photosynthetic producers of organic materials in the oceans. Huge baleen whales skim the surface for hours, consuming hundreds of kilograms of diatoms with their comb-like teeth. In addition, diatoms are able to produce a high-quality oil. Much of the petroleum reserves found today are in large buried deposits, apparently of diatom origin. Imagine the countless billions of diatoms that must have been sorted and buried suddenly under flood conditions to produce our seemingly endless supply of oil. Large deposits of diatomaceous earth, such as those being mined in Lompoc, California, are merely the left-over glass-houses of diatoms and are used in preparing such commercial products as detergents, fertilizers, insulation and sound-proofing materials, polishes, and paint-removers.

As intelligent human beings, we can certainly recognize the geometric design that has gone into these tiny diatoms. Complex structural mathematics are at work here, producing almost perfect geometric shapes.