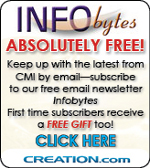 Madagascar is a large island about 400 kilometres (250 miles) off the coast of Africa. It contains many species of lemurs (which are classified with apes, monkeys and men as primates), both fossil and living. The largest, at 400 pounds (180 kilograms), would be about the size of a modern adult gorilla.

It used to be thought that the lemurs got to Madagascar before the island broke off from Africa. But, to be consistent with the evolutionary time-frame, evolutionists now have to assume that Madagascar was in its present place before these creatures arrived.

So how did they cross this huge stretch of deep ocean?

For evolutionists, this poses a similar problem to that which is often used against creationists—that is, how could animals, especially large mammals, cross stretches of water in post-Flood migration? Land bridges in an ice age would solve many problems for both sides, but not all.

In the case of Madagascar, no such answer appears possible, and we are now told that for the ancestors of today’s lemurs, ‘the only possible means of access to Madagascar was by “rafting”: floating across the Mozambique Channel from Africa on matted tangles of vegetation.’

Some of these lemurs were slow-moving and slothlike. Their journey as ocean passengers could have taken much less time than by land.

Of course, if creationists had said that 400-pound mammals hitched a ride across hundreds of miles of open sea on huge floating islands, it would have been ridiculed as special pleading.

The reality of such transport possibilities is a valuable concession by evolutionists in any future discussion of how animals dispersed after Noah’s Flood.