This is a brief update to our article on “Flores man,” also nicknamed “The Hobbit” after one of Tolkien’s fantasy groups of quasi-humans. Those who have not yet done so are recommended to read the article titled Soggy Dwarf Bones.

This tiny 1m (3’4”) alleged evolutionary sensation was found on the Indonesian island of Flores and regarded as a “new species” of human (Homo floresiensis). It was said to be at least “18,000 years” old, with the site dated as up to “800,000.”

In a recent development, Indonesian scientists have strongly refuted many of the sensational evolutionary claims about Flores man (so called in spite of the fact that the skeleton was claimed to actually be that of a woman). The country’s influential Jakarta Post (JP) ran an article on 8 November 2004 titled “RI scientists refute Flores Man finding.” (RI = Republic of Indonesia.)

“The skeleton is not a new species as claimed by these scientists, but simply a fossil of a modern human, Homo sapiens, that lived about 1,300 to 1,800 years ago.”

While acknowledging the small brain size (380 cc, less than that of a chimp) and obvious differences with typical modern humans, he apparently stated that the remains were those of a member of the “Australomelanesid race, which had dwelled across almost all of the Indonesian islands.”

Referring to the skeleton’s eye socket shape and hip bone curves, Jacob suggested that it was not of a woman at all, but a male who died aged around 30. Interestingly, he also criticized as unethical the action of the Australian scientists who announced the discovery. Both Jacob and Prof. Dr. R. P. Soejono, head of Indonesia’s National Archaeology Institute, said that the Australians should have involved them when making the announcement, especially considering that the Australian scientists were not there when the discovery was made. Soejono claimed that the work on Flores was actually started by Indonesian scientists in 1976, and forced to a halt by the 1997 Asian financial crisis.

Whether the refutation was influenced in part by “turf wars,” and/or national sensitivities, it is interesting that professional academic paleoanthropologists could have two such radically different views about both the identification and particularly the age of the same specimen. Certainly our view (that this is likely a miniature human being exhibiting part of the same range of post-Babel human variation as encompasses the larger so-called Homo erectus) is not harmed, if anything the opposite, by this Indonesian opinion.

The Indonesian comments about a pygmy Australomelanesian group of people is interesting in light of the many reports one used to hear from missionaries, mostly from the early part of last century and before, about what they often called “the little people.” These reports, mostly concerning far northern regions of Australia (hence closer to Indonesia) were of an allegedly distinct (but now no longer extant) population of very small humans, i.e., a group quite distinguishable from the local Aboriginals. Could at least some of these have been the same (or a closely related) people group as those whose skeleton has been found on Flores? Controversial Australian historian Keith Windschuttle recently published a definitive study on Australia’s short-stature tribes, referred to variously as Pygmies, Negritos, Tasmanoids, and Barrineans.1 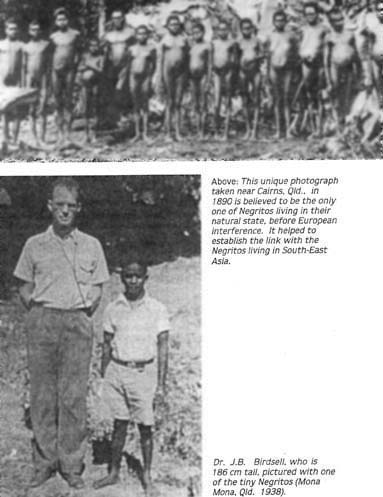 A couple of photographs claiming to be of these people appear in the autobiographical book by Will and Marjorie Sharpe called What an Experience (Boolarong Publications, Esperance Western Australia, 1989, p. 9) and that page is shown here [right].

The non-European in the bottom photo is clearly of normal skull-body ratio. An article in Britain’s Observer quotes Dr. Jacob as suggesting the abnormality known as microcephaly (in which a human is born with a lower brain size) was responsible for Flores man’s small brain/skull size.2 This is disputed by well-known human evolution authority, Britain’s Dr. Chris Stringer, who points out that Flores Man has other features, not just a reduced brain, distinct from the typical human today.

However, an item posted on 1 November by Anatomy Professor Maciej Henneberg gives significant support to the “Flores Man was a microcephalic” view.3 Henneberg is the Head of the Department of Anatomy at South Australia’s Adelaide University, and has studied human evolution for 32 years. He says that the dimensions of the face, nose and jaws do not differ significantly from those of modern humans, unlike the very small braincase. He says, “The bell rang in my head” as he recalled a Minoan period human skull from Crete, which has long been identified as that of a microcephalic. Prof. Henneberg says that doing a statistical comparison of the two skulls (using the meticulous dimensions provided on the Nature website) “shows that there is not a single significant difference between the two skulls though one is reputedly that of the ‘new species of human’, the other a member of a sophisticated culture that preceded classical Greek civilisation.”

Henneberg also says that deeper down in the same cave on Flores, a radius (forearm bone) was discovered. Its length of 210 mm suggests that its owner was 151-162 cm (5’ to 5’3”) tall, well within the normal human range today. And probably consistent with a healthy, good-sized member of the “little people” as depicted in the photo above. [Author’s note inserted 1 April 2005: Although the controversy about microcephaly is reported with interest, and highlights the essential humanness of the specimen, the opinion given in the first of our articles on this find is one I still hold, pending further information. I wrote in the addendum to that article, titled Soggy Dwarf Bones: “We are not suggesting that the anatomical features of the Flores woman were simply those of a (miniature) modern type human. They are those of a (miniature) Homo erectus, a variant of the modern type, but within the human kind.”]

Interestingly, the JP news report also highlighted the same fact we did, namely that the specimen was not really fossilized (mineralized). This of course is more consistent with a much younger age for the skeleton than in the Nature announcement. Dr. Soejono was quoted as saying, “...we were able to find soft tissue so that we could carry out a DNA test. We couldn’t do that if it was already a fossil.” Interestingly, a media release posted by Australia’s Southern Cross University, on 8 November 2004, suggests that the Flores (or Liang Bua, as the site is also known) people may have inhabited the island up to about “500 years ago.”

I hope the DNA results are announced soon, and we await them with great interest. The more identifiable stretches of DNA that are present, the better. We would expect that the results will be consistent with the human identification. The very fact that DNA is still present in an unfossilized specimen is another indicator for a young age, much more likely to be in the ballpark of the figure cited by the Indonesian scientists than the one reported in Nature. (DNA is a fragile molecule that falls apart very quickly, as far as laboratory measurements are concerned—see Salty Saga.)