Early on Monday 29 May 2006, a mud volcano started erupting in East Java, Indonesia, near the village of Sidoarjo.1 Boiling water, steam, gas and mud began gushing from the ground just 200 metres (650 feet) from a drilling well exploring for natural gas.

Enough mud is flowing out of the volcano to fill 50 Olympic swimming pools every day.2 The mud has destroyed factories, schools, 10,000 homes, a dozen villages and displaced over 50,000 people. It has buried a major freeway and a railway line.3

Earthen walls have been built and now contain the mud to an area of seven square kilometres (3 sq. miles). The mud is up to 20 metres deep.

The locals call the volcano Lusi.4 Every effort to stop the eruption has failed, including dams, drainage channels and even dropping massive concrete balls into the crater. Scientists think the volcano will continue erupting for decades. More homes are threatened as new mudflows appear in the vicinity.

In 2007, geologists reported that the land around the mud volcano was subsiding. The mud escaping from beneath the surface was allowing the overlying rock strata to collapse. It could be the start of a caldera—a large basin-shaped volcanic depression. So far the ground under the mud has subsided over 60 m and the volcano has risen more than 25 m.5 Some geologists believe that, as the land subsides, more cracks could open up that develop into new mud volcanoes, making the mud volcano self-perpetuating.1

Even though the Lusi mud volcano has been disastrous for the local area, the total volume of mud extruded in the first few years was less than one tenth of a cubic kilometre (0.1 km3). That is small compared with volcanos such as Mt St Helens in the USA which ejected one cubic kilometre (1 km3) of material in its 1980 eruption.6 In 1883, the infamous Indonesian volcano, Krakatoa, blasted out 18 km3 of material.7 Even larger still, the Taupo volcano in New Zealand ejected an enormous 800 km3 of debris, creating a huge caldera (now Lake Taupo, the largest freshwater lake in Oceania) a few thousand years ago.8

Lusi gives us a tiny clue into how the year-long catastrophe of Noah’s Flood could have unfolded.

Even larger were the volcanos that erupted during Noah’s Flood. One well-known deposit of volcanic lava in the UK extends for hundreds of kilometres, covering most of Northern Ireland and a large part of Scotland. Individual lava flows are up to 100 m thick, while the entire deposit is more than a kilometre thick.9

Lusi demonstrates that vast geological forces still10 lie stored beneath the earth, and that these can inflict sudden damage and loss on tens of thousands of people in a relatively short time. Contrary to the impression we are given, it does not take millions of years for thick deposits of mud to accumulate. When geological forces are very large, the time involved can be very short, as the thousands of Lusi refugees know from personal experience.

Lusi gives us a tiny clue into how the year-long catastrophe of Noah’s Flood could have unfolded. The Bible says that “all the fountains of the great deep burst forth”11 (Genesis 7:11) and “the waters prevailed and increased greatly on the earth” (Genesis 7:18) until “all the high mountains under the whole heaven were covered” (Genesis 7:19). Lusi helps us picture how those enormous geological forces of Noah’s day changed the surface levels of the earth and the oceans. This catastrophe destroyed the world as it existed at that time. 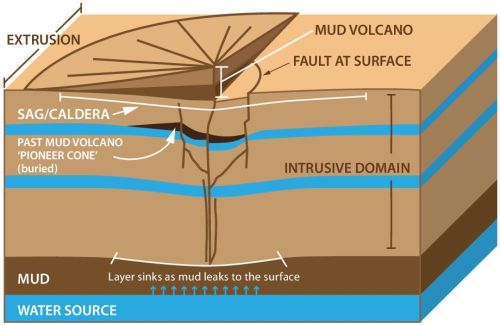 What caused the volcano?

Some geologists suggest that some two kilometres (1.2 miles) underground the exploration drill bored into a limestone area containing water at very high pressure. The water forced itself into the overlying strata creating a network of fractures that reached all the way to the surface.

Instead of flowing through the drill pipe, the high-pressure water flowed through the fractures in the rock picking up mud from the overlying strata as it went. Eventually, it erupted as a mud volcano 200 m away from the well.12

Other geologists claim that an earthquake that hit Java two days earlier, not water from the drill, caused the deep fracturing. The high pressure mud and water in the overlying strata then travelled to the surface through these fractures.13

Voice of the Volcano comic
US $2.50
Soft Cover

Voice of the Volcano comic
US $2.50
Soft Cover
Footprints in the Ash
by John Morris, Steven A Austin
US $17.00
Hard Cover