Can you imagine a time when mayflies were over five times bigger than today, and the ground was walked by giant ants—their queen bigger than a hummingbird? What about if insects looking somewhat like gigantic flying cockroaches with 43–cm (1½–ft) wingspans came into your kitchen? Would you have felt uneasy with gargantuan dragonflies—wingspans as wide as a hawk’s—darting around you?

Sound impossible? In fact, all of these examples are known from actual fossils—so at some time in the past such creatures were living on this earth.1,2,3 The largest fossil insect found so far, the dragonfly Meganeura, had a wingspan of 71 cm (nearly 2 ft 5 in).1,4 For years, scientists have puzzled over how such giant insects could have existed at all, let alone fly.

The problem was lack of oxygen. Biology textbooks have long taught that insects don’t breathe—at least, not like we do.5 Instead of lungs sucking in air via nostrils or mouth, insects have a network of tiny air tubes (tracheae) which open to the outside air via a row of small holes (spiracles) along each side of the body. It was understood that insects don’t actively inhale or exhale; so it was taught that air only seeps in and out of the insects’ air tubes passively. Obviously, such ‘passive diffusion’ is a very slow process. And it only works over short distances.6,7,8

Only about 0.5 cm (0.2 in)! So an insect could not be wider than about 1 cm (0.4 in)—about the size of the largest insects flying today.2 More than that and not enough oxygen would get to the insect’s innermost cells. But the colossal fossil Meganeura dragonfly had a body (thorax) nearly 3 cm (1⅛ in) across! How to explain that?

Some scientists thought that atmospheric oxygen levels in the past were higher, allowing insects to attain larger sizes.1,2,9 In theory, if the atmospheric oxygen were much more concentrated, then oxygen could penetrate further into an insect’s air tubes, allowing insects to grow bigger. But this idea has problems—and in any event does not explain why other giant creatures of the past (e.g. giant marsupials, which everyone accepts were living in an atmosphere the same as today’s) have also disappeared.

A recent amazing breakthrough seems to have given an answer, overturning the long–held idea that insects don’t breathe. Researchers used new X–ray technology to look inside live insects—which showed that insects pump their air tubes much as humans expand and contract their lungs.10,11,12

‘Previously we all thought that most insect breathing tubes were fairly stiff, but they are anything but stiff’, said Dr Mark Westneat, leader of the research team.13 ‘We could watch the tracheal tubes in the head and thorax, which are not squishy parts of the body, really squeezing and releasing.’

Even while at rest, the insects exchanged up to half of the air in their main tubes about every second.14 As Dr Westneat observed, ‘They are really pumping some gas.’15 (This is comparable with birds and mammals—e.g. humans at rest have a lung ventilation of about 10%, but this may reach 75% during exercise.10)

This remarkable discovery solves the mystery of how colossal insects could have existed in the past, without the need for higher oxygen levels in the atmosphere. 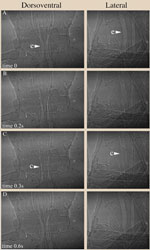 Where did the giants go?

Given that the giant insects of the fossil record, with tracheal breathing, would have been able to live in an atmosphere similar to today’s, why don’t we see such megabugs today?

In addressing that question here, our starting point, from the Bible, is that insects were created; they did not evolve. (Note that this view is not shared by Dr Westneat, who kindly allowed us to publish these X–ray photographs (p. 46) on condition that we make it clear that he and his co–workers ‘are studying the evolution of respiration and are not willing to mix religious belief with science’.16 See box on right.) Were giant dragonflies created as their own special kind? Probably not—it is much more likely that they were descendants of the original created kind of dragonfly—just as we see a large range of dog sizes that have been bred from the wolf kind.17 The fossilization of these giant insects (and other creatures) can be readily under­stood as a legacy of the global Flood—which happened not billions of years ago but only around 4,500 years ago.

So why did the colossal insects disappear? Perhaps the giant insect representatives of each kind perished in the Flood, so the genetic information for large size was lost. Or possibly the ensuing Ice Age and/or different post–Flood climate took their toll on the larger insects, i.e. there was a climatic selection pressure for smaller size. Alternatively, some may actually still exist today (see box on right).

Perhaps the explanation, as for other giant animals which have since become extinct,18 involves post–Flood man. Giant insects may well have been seen as a nuisance or menace and killed accordingly. They may also have been a readily captured food source (Genesis 9:3) as humans spread out and repopulated the earth after the Flood.19 If the larger insects were more frequently/readily killed, then eventually the genes for large size would have been eliminated.

Recognizing the implications of their work for evolutionary theory, Dr Westneat and his colleagues1 said: ‘[A]ctive tracheal breathing in the head and thorax among insects may have played an important role in the evolution of terrestrial locomotion and flight in insects, and be a prerequisite for oxygen delivery to complex sensory [neurological] systems and the brain [emphasis added].’2

But Thomas Miller, an insect physiologist at the University of California, said of insect breathing, ‘It looks like there’s a very complicated neurological system to keep all this coordinated.’3 So if breathing had to evolve to get a neurological system, which in turn is needed to coordinate the breathing, this would be a classic case of irreducible complexity, where all the complex features could not have arisen step–by–step but had to have appeared at the same time.4

Certainly, in relation to how insect bodies work, there are levels of complexity which are only just becoming apparent as researchers probe deeper. Indeed, ‘there’s even emerging evidence that insect breathing is synchronized with the pulsing of the creatures’ circulatory systems, a level of physiological sophistication few had imagined.’3

Complicated, coordinated, sophisticated—all of which speak of insects having been designed rather than being the result of some blind process of evolution. Commenting on these latest findings, May Berenbaum, an entomologist at the University of Illinois, said, ‘Insects never cease to amaze with their capacity to do a lot with the little they have. We were clearly mistaken to underestimate the capacity of their tracheal respiratory system.’

No wonder the Bible says that anyone who denies there is a Creator God is ‘without excuse’ (Romans 1:20).


Are any giant insects still left?

While not quite matching some fossil giants, there certainly are large insects living today. Indonesia’s atlas moth (Attacus atlas) and Papua New Guinea’s Queen Alexandra birdwing butterfly (Ornithoptera alexandrae) both have wingspans of 30 cm (12 in).1

Indonesia’s Atlas moth (above) and the massive beetle from South America known as Titanus giganteus (left) are among the largest known insects living today.

Then there’s Australia’s Hercules moth (Coscinocera hercules), with a wingspan up to 36 cm (1 ft 2⅜ in)!2 Malaysia’s giant stick insect Pharnacia serratipes has an overall length (i.e. including extended fore and rear legs) of 55.5 cm (nearly 22 in).3 The South American longhorn beetle (Titanus giganteus) can be over 16 cm (6⅜ in) in body length (not including antennae), as can another beetle, Dynastes hercules.

In terms of solid bulk, probably the champion insect would be the acteon beetle (Megasoma acteon), the males of which can be 10 cm (3½ in) long, 5 cm (2 in) wide and 4 cm (1⅝ in) thick;4 while possibly the heaviest is the goliath beetle (Goliathus goliath) of Africa, reputed to weigh up to 100 g (3.2 oz)—more than a small bird!5

It is remotely possible that some giant insects still exist. Entomologists estimate there are still many unknown insect species living in inaccessible tropical forest areas.