Islam, violence and racism in Sydney

The Rev. Peter Barnes is known for considerable insight into Muslim issues, as well as being a strong supporter of the Australian creation ministry. In February 2006 he engaged in a series of three public debates in Sydney, Australia, on ‘Islam or Christianity: which is of God’?

The following article of his was triggered by the December 05 ‘race riots’ in Cronulla, a beachside suburb of Sydney, that shocked a complacent nation. In it, Dr Barnes spotlights the way in which the decline of Christianity in this and other Western nations (a decline we have been saying for decades is inevitable when the biblical foundations are abandoned by the church and the culture in general) has left us exposed. A secular liberal society and a weakened church is no bulwark against the most prominent social problems of the day. 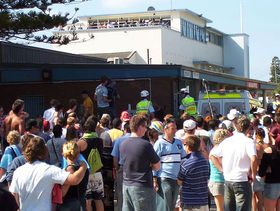 The vicious riots that began at Cronulla beach on Sunday 11 December spilled over into payback outbursts of violence in Maroubra and Sans Souci the next night, and continued to splutter and fizz for the next few days. We were all confronted with some ugly scenes. Both sides — mainly drunken and hedonistic surfies versus testy and vengeful Lebanese youths — were full of venom and hatred. Two lifesavers had been bashed by a Lebanese gang a week before the riot; a surfing lout chased a Muslim woman, ripped off her hijab, and then waved it around in a display of what he obviously supposed was triumph; the Uniting Church at Auburn was burnt down; and, also at Auburn, there were shots fired in the direction of a Roman Catholic school as parents and students were singing carols.

We had read of riots in France, and thought that it would not happen in multicultural Australia. But it has. Gurus of all kinds have offered their spin on events. The media, including even the New York Times, have blamed racism, even sheeting home the prime responsibility to white supremacist activists. Somewhat similarly, Mike Carlton and David Marr have blamed sections of the media, especially 2GB’s popular loudmouth, Alan Jones. Others — notably the retired detective Tim Priest — have blamed the rise of Middle Eastern gangs of criminals who are disaffected from Australian culture. Many Lebanese males have exhibited a ‘chip on the shoulder’ attitude to the wider community, and an addiction to portraying themselves as the victims of anti-Muslim sentiment. They cannot see that Wahhabism and thuggery are scarcely distinguishable.

Suggestions for solving the problems have abounded — more police, less alcohol, more laws against vilifying other nationalities or religions, more multiculturalism, less multiculturalism, more interfaith dialogues, more secularism, an Anti-discrimination Board on every street corner, and so it goes on. Platitudes and clichés have been trotted out, but the most incisive comment that I read came from one disgruntled letter writer who stated: ‘Let us concentrate on those things that unite us, not those that divide us. Except for a few superficial differences in appearance, a Middle-Eastern-looking idiot is pretty much the same as a blond, blue-eyed idiot.’

In the 1990s Samuel Huntington wrote of ‘the clash of civilizations’, but these riots have looked more like the end of any civilization — rather like Munich in the 1930s when Communist and Fascist mobs tore into one another. The truth is that what was once called Christendom is now that part of the world where the Christian faith is mocked and scorned in schools, academia, and much of the public arena.

The West has embraced what Meic Pease has called the ‘anti-value’. This is affluence without meaning — Coca Cola cans, a culture of rap music and fashion, immodest dressing, coarse language, homosexual marriages (now in Holland, Belgium, Spain, Canada, and Britain), and the glorification of the trivial. Birth rate levels in the West are catastrophically low, and illegitimacy rates are catastrophically high. One is obliged to be ‘progressive’ — a vague term which is actually another example of an anti-value. Christianity teaches both humility and self-worth; humanism proclaims self-esteem but achieves self-loathing. To cite Meic Pearse again: ‘The anti-culture begins by pleading tolerance for its anti-values and ends by devouring all who will not say its shibboleths.’

In mid-2005 a Muslim named Salmaan sent an email to Miranda Devine. Here he stated:

‘Most Muslims who have migrated to this country have been shocked by how universal values [and] gender etiquettes lasting a thousand years have been tossed aside in an orgiastic free for all in the last 20. This is not what my parents expected when they came to this country. I am also sure that this is not what John Locke envisaged when he championed individual liberty.’

That is a most perceptive comment. Life surely consists of more than watching episodes of Big Brother Uncut and other such gems.

In 2001, as the Australian parliament discussed the issue of embryonic stem cell research, Senator Amanda Vanstone claimed that religion had no place in the debate:

‘Let me turn to some of the objections which have their basis in a religious view. My own position is this: if you lead a good life, any god worth knowing will accept you into his or her heaven. I do not think — since I went to an Anglican school — that there will be any St Peter at the gates dispatching infidels to another place, smirking behind his hand that this sucker made the mistake of going to a Catholic, an Anglican or a Baptist church or of being a Jew, a Hindu or a Muslim. If the basis for getting into heaven is that you pick the right church, then frankly I’m not terribly interested in going there. It could be a very boring place.’

Senator Vanstone’s outlook reflects a predilection for lazy thinking, but it is in fact a common view. Indeed, it is the prevailing one in the West. When France banned Muslim head scarves and large crosses in schools and government offices, President Jacques Chirac claimed that ‘Secularism guarantees freedom of conscience. It protects the freedom to believe or not to believe.’ It, of course, only protects the freedom not to believe, and it conveniently sidelines all Christians — and for that matter, all adherents of other faiths — from the political arena, leaving it available only for the humanists.

Recently, Janet Folger has spoken not of the marginalizing of Christianity but The Criminalization of Christianity (Oregon: Multnomah, 2005). Quoting the Bible in public can be illegal in Canada; a town in California has removed a nativity scene but spent $500,000 of public money on constructing a statue to an Aztec god; Google recently banned an advertisement on a Christian group’s website because it was critical of homosexuality; two women who advertised for a roommate in Madison Wisconsin declined to take in a lesbian, and were forced by the Equal Opportunity Commission to attend ‘sensitivity training’, pay the lesbian $1500, write a formal apology, and have their housing situation ‘monitored’ for two years; while here in NSW representatives of the Board of Studies have told Christian schools that they cannot cite biblical verses in favour of corporal discipline to parents. Dietrich Bonhoeffer saw this from his Nazi prison cell in the final years of World War II: ‘The west is becoming hostile towards Christ. This is the peculiar situation of our time, and it is genuine decay.’ Australians are likely to bemoan the loss of what some call ‘Australian values’. That kind of patriotism is, said Dr Johnson, ‘the last refuge of a scoundrel’. It misses the point.

The problem is that Australia has descended into a huge moral and spiritual vacuum. Democracy will not save us, nor will education schemes to promote multiculturalism and interfaith harmony. The silliest, and ultimately the most dangerous, interpretation of the Cronulla riots came from Rev. Bill Crews of the Uniting Church. He blamed the fundamentalists on both sides, as if Cronulla beach on 11 December was just crawling with strict Bible-believing evangelicals who were on the lookout for unbelievers to evangelise.

The riots have demonstrated the truth that for decades now we have been trying to build a society on foundations of fairy floss. The untrained American evangelist D. L. Moody stated: ‘I don’t believe that a republican form of government can last without righteousness.’ A few decades later, this warning was echoed by the learned American-cum-English poet, T. S. Eliot:

‘If Christianity goes, the whole of our culture goes. Then you must start painfully again, and you cannot put on a new culture ready made … You must pass through many centuries of barbarism.’

That is about where we are up to.

See also: The Koran vs Genesis and
Who really is the God of Genesis?