A decade ago, when the newly opened Russian government archives revealed details of biologist Ilia Ivanov’s attempts to create an ape-human hybrid in the 1920s, it made international headlines. Why had Ivanov’s project, which included expensive expeditions into Africa, been both sanctioned and financed by the Bolshevik government at a time when few Russians were allowed to leave the country? Some suggested that the military commanders aimed to breed super-strong hairy ape-man warriors for what The Sun in London referred to as ‘Stalin’s mutant ape army’.1 However, neither Ivanov’s nor the government’s actual motives for the project were spelled out clearly in the archive documents.

University of Cambridge specialist in Russian history, Soviet-born Alexander Etkind, in a recent journal paper entitled ‘Beyond eugenics: The forgotten scandal of hybridizing humans and apes’, believes he has the answer.2 Etkind says that when Ivanov put his proposal to the authorities, he painted it as the experiment that would prove men had evolved from apes. (But see box: ‘The limits of hybridisation’.)

‘If he crossed an ape and a human and produced viable offspring then that would mean Darwin was right about how closely related we are,’ Etkind says. Ivanov’s approach to the government stressed how proving Darwin right would strike a blow against religion—Ivanov of course knowing that religion was something the authorities ‘were struggling to stamp out’.

Note that it wasn’t only the Bolshevik government that financed Ivanov’s vision. Etkind writes that when news of Ivanov’s proposal reached USA shores in the 1920s, ‘The American Association for the Advancement of Atheism announced its fund-raising campaign to support Ivanov’s project but gave it a scandalously racist interpretation.’

The limits of hybridization 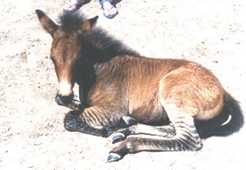 ‘Tigger’ (above), belongs to Camilla Maluotoga, from New Mexico in the USA, and is the name she gave to this cross between a horse and a zebra, known as a zorse.

Ilia Ivanov was initially not regarded as a crank, having established something of a reputation for himself as a successful breeder of hybrid animals using AI (artificial insemination) techniques.

Thus having established credibility, he told a gathering of zoologists in 1910 that he believed it might even be possible to create hybrids between humans and ‘their closest relatives’, by which he meant apes.

The fundamental flaw in Ivanov’s argument is that he failed to recognize (or, at least, acknowledge) that zebras and donkeys, although labeled as being different species, are in fact members of the same originally created kind. Similarly bison, yaks and other cattle are descendants of the same created aurochs kind. But the limits of hybridization are clearly such that different kinds of creatures cannot be hybridized with one another—e.g. one cannot cross an antelope with a pig, nor a panda with an aardvark. But it is possible to hybridise lions and tigers, and dolphins and killer whales—see Don Batten’s classic article Ligers and Wholphins? What next? for more on this subject.