The reviled skunk shows brilliant design—even in a fallen world.

The night was dark and the star-filled autumn sky twinkled with awesome beauty. I was slowly drifting into a dreamy sleep, snug in my sleeping bag. Serenaded by such night denizens as the barred and great horned owls, and the lonely call of coyotes, it was a night that fond memories are made of. Suddenly, my meditation was broken—a new sound was added to the night symphony. A creature approached and it was headed in my direction! The noise was slow and awkward and it shuffled as it walked through the newly fallen leaves. I was pretty sure I knew what it was, but aimed my flashlight anyway.

All I saw were two blinking eyes reflecting white in my beam. The French Canadian trappers called it ‘Enfant du Diable’ which means ‘child of the devil’. Others know it as the woodpussy or polecat. I knew him as the striped skunk, Mephitis mephitis!

At first emission, we may not agree with those trappers of old. Once you’ve faced the consequences of the southbound portion of a northfacing skunk, ‘child of the devil’ may seem too mild a description!

Mephitis mephitis means, appropriately enough, ‘a noxious exhalation from the ground’. This skunk is known for its two broad stripes on the back, meeting at the head, and a white stripe down the centre of the face. I’ve also seen versions that are almost all white or all black. Their claws are not retractable and make great tools for digging. It’s just as well because our Creator has made them a ground creature. The Eastern Spotted skunk, Spilogale putorius, has irregular stripes and elongated spots on the sides. It is also faster, more agile and more of a tree climber. Both live in dens, either found abandoned or dug themselves on well-drained sites. The spotted skunk, being the more social, has been found with 12 individuals in one winter den. Most were female, leading some researchers to believe that they may be polygamous.1

Reaching a length of about 63 cm (25 inches) and weighing about 4.5 kg (10 pounds), they eat plants, insects, grubs, small mammals, and the eggs of birds and turtles.

The spotted skunk, being the more social, has been found with 12 individuals in one winter den.

Bee keepers need to be especially careful. At night, a skunk will come to the entrance of a hive and scratch. This will bring the guard bees out to investigate. At that point the polecat will lap them up and scratch again. The whole hive could be lost in a couple of nights! Even so, the skunk is more of a help to us than a hindrance because it destroys many of the vermin that cause crop failure and human disease.

Skunks may mate in the winter and the young are born in the spring. But sometimes they will mate in summer or autumn, triggering a most unusual event. The fertilized egg floats freely for several weeks, (or even as long as 180–200 days in the spotted skunk) and then implants on the uterus. This complicated process, known as delayed implantation, allows the animals to mate in summer or autumn and still bear young in the spring when food is plentiful and the conditions for growth and survival are optimum. This amazing form of reproduction is also known to occur in other members of the skunk family, as well as in bears and in the fallow deer. Four to seven young are born in mid–May and they are blind with fine hair. They are weaned in six to seven weeks and though their scent isn’t very potent, the function is already well developed.2 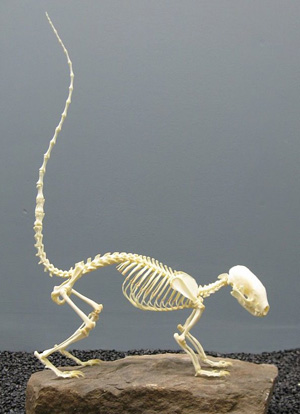 Skunks have long been confidently classified in the same family as weasels, the Mustelidae. However, recent genetic comparisons show that they should be in their own family, named the Mephitidae. This would consist of the hog-nosed, striped, and spotted skunks of North America and the ‘stink badger’ of Asia. Chris Wozencraft, a mammalogist at Lewis and Clark State College in Idaho, USA, says that ‘the situation was already bad, but this may make it even more confusing’.1 Creationists view similarities (genetic and overall features) as being the result of either common design, or common descent from the original created kind.

Being nocturnal, they have the tools endowed by God to be active in the dead of night. The back inner surface of the eye is known as the retina. This is the layer that receives the image that we are looking at. It consists of two types of photoreceptor cells. The rod cells detect very low light levels. The cone cells help to distinguish fine details and discern colours. Skunks have many more rod cells which allow them to see much more in low light conditions.

Have you ever wondered why the eyes of nocturnal animals glow and ours do not? In our eyes, light is absorbed through the retina and lost. However, in nocturnal animals, a mirror-like layer of tissue at the back of the eye called the tapetum bounces light back through the retina. We see that reflected light as the eye-glow of these animals. Instead of the light being lost, the tapetum recycles the light, sending it back and activating more rod cells. This greatly intensifies the skunk’s ability to see in the blackest of nights!

Their whiskers are also a wonderful tool. They are finely tuned instruments, allowing them to measure crawl spaces and detect nearby objects. And let’s not forget the nose they’re attached to! It is powerful enough to smell turtle eggs buried several centimetres below ground—all are important engineering features for a night creature.

As for the ‘chemical warfare’ they are known for, think of it as their most effective means of protection. They’re not very fast and not very big. They would be eaten by almost anything were it not for the noxious substance, known as n-butyl mercaptan, that protects them so well! This yellowish chemical contains sulfur, which helps give the fluid its ‘devilish’ odour. Historically, mine operators in the western United States used skunk oil as a warning device. If there was an emergency, the oil would be poured into the air system. One whiff would send the miners to the surface in a hurry! Believe it or not, because of the great clinging quality of skunk oil, the musk portion has been used as a perfume base, once the mercaptan is removed.3

The skunk fires the fog-like spray by muscular contraction from twin barrels (glands) in its rear end. An experienced skunk can control the amount of discharge. It has enough for five or six detonations and that woodpussy will arc each shot to get the most out of its 6 m (20 ft) range!

The spotted skunk will give you fair warning. If you happen to cross trails with it and you see it raise its tail, do a handstand on its forefeet, spread its back legs, and suddenly you notice that you’re less than six metres away, you gawked too long—you should have gotten the hint when its tail first went up! You’ll need tomato juice, ammonia or carbolic soap unless you want your social life to take on a unique malodourousness.

If you get hit in the eyes, expect pain and a loss of vision. But, the good news is that the loss of vision is temporary and skunks don’t like firing unless they absolutely have to.

Believe it or not, because of the great clinging quality of skunk oil, the musk portion has been used as a perfume base, once the mercaptan is removed.

Skunks, like many other creatures, have design features which can help them to cope in a post-Fall world, after the Curse on all creation because of Adam’s rebellion. We should always bear in mind that we are not looking at the world as it originally was at creation.4

One of the few predators crazy enough to eat skunks on a regular basis is the great horned owl (Bubo virginianus). This owl has a wonderful feature for this situation—its sense of smell is sorely lacking!

That night, as I watched this fellow enter my campsite, I thought about some of these things. He was merely doing the things he was created to do. The old boy knew I was there and paid me no attention. I’m sure he wanted me to do likewise! So, I moved my sleeping bag out of his way, tossed it on the picnic table, and let him have full run of the campsite.

Knowing a few things about this complicated organism and knowing the Master Mind behind it, allowed me to drift off into that dreamy sleep with no worries. Though I don’t remember what I dreamt that beautiful night, I do know that skunks being children of the devil was the farthest thing from my mind.

That spry little critter was no ‘Enfant du Diable’. He was designed by my heavenly Father for a purpose. If there is that much design in a lowly polecat, then how much more do we mean to our Saviour? ‘Be ye therefore followers of God, as dear children; And walk in love, as Christ also hath loved us, and hath given himself for us an offering and a sacrifice to God for a sweetsmelling savour’ (Ephesians 5:1–2).