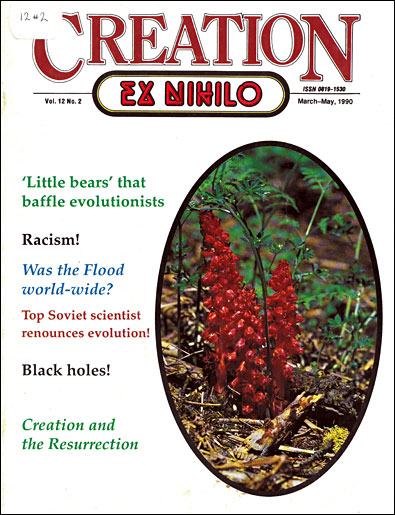 A well-known zoology textbook states that the beginner may skip the section dealing with the Tardigrada (Greek bear animalcules).1

Why do I say that we should do the opposite, and consider these especially? Because they lead us into those realms of biology at the outer limits of evolutionary thinking, wherein one may observe incontrovertible evidence that there exist creatures which could never have come into existence through chance mutation and selection.

Despite their vanishingly small size, they are metazoa (multi-celled creatures), just as are larger animals. As seen in Figure 1, the head with its two little eyes, the rump and the eight little legs, complete with claws, reminding one of a bear, are clearly recognizable.

Figure 2 demonstrates that they are equipped internally as well with all that a regular animal must have. Following on from the mouth opening is a muscular pharynx and oesophagus. The gut possesses digestive glands. The females have large ovaries with their outlet into the hind-gut.

Figure 3 (upper) shows their impressively developed nervous system with a brain and a connected chain of abdominal ganglia.

Why would they need such a relatively massive nervous system? The eyes are embedded in the lateral mass of the brain. They contain only a single receptor cell, which also contains the necessary pigment and even the lens. As little as this may seem, barely more than some one-celled creatures, the basic principle of vision is the same for them as for larger eyes.

Excretion of body fluids, to the extent where this is not from the body surface itself, is via the Malpighian tubules. Respiration is directly through the skin, as also occurs in much larger amphibians. Muscle strands extend into the legs as well. Males have paired gonads, females one-sided. Tardigrada moult their skin several times during their one-to-two-year lifetime, which is one of the reasons they are usually classified as arthropods. The eggs are sometimes carried along on the creature’s back, in a sack made of discarded skin.

Despite their small size, these ‘little bears’ present some big problems for evolutionists. All evolutionary textbooks portray the belief that all life is monophyletic, that is, that it arose from one single cell, and that one root stock gave rise to the diversity of all living things. But the Tardigrada throw this belief into confusion, so much so that the renowned zoologist Kaestner was forced by the pressure of facts to write:

It is apparent that attempts to fit the Tardigrada into the usual Darwinian scheme of things cause such difficulty that we must consider the possibility that they may have had separate (polyphyletic) origins.

Such words shake the foundations of Darwinian ideology. It is apparent that attempts to fit the Tardigrada into the usual Darwinian scheme of things cause such difficulty that we must consider the possibility that they may have had separate (polyphyletic) origins. Creation scientists, of course, have long maintained a simultaneous polyphyletic origin of many different groups through a mighty act of creation.

However, the bigger problem for thinking evolutionists is the ‘over-adaptedness’ of these creatures.

The different varieties of Tardigrada are most usually found in periodically moistened sites. However, they also live in the shallow oceans, as well as in the deep sea to nearly 5,000 m (16,000 ft). They are found on sandy beaches, sometimes buried as deep as 60 cm (2 ft). They live on glaciers, and also at the edge of hot springs, thriving in temperatures as high as 40 degrees Celsius. Several varieties have been found living at 6,600 m (22,000 ft) above sea level in fresh water. In a sense the whole earth, from the Arctic to the Antarctic—continents, mountains, seas and lakes—is their ecological ‘niche’.3

But the adaptability of these cosmopolitan little bears does not end there.

Land-living bear animalcules have the capacity, under unfavourable environmental conditions, to convert themselves into a more durable form, by rolling in their head and legs to form a tiny barrel-like structure [Fig 3 (ii)], showing its relation in size to the normal form in [3 (i)]. During this transformation, called anhydrobiosis, the tissues lose a great deal of water and undergo other biochemical reactions which give rise to remarkable durability without any alteration in the essential intracellular components.4

As soon as it finds itself in favourable circumstances again, the arms and legs unroll once more and life goes on as before.

Apart from being able to last for years in such a desiccated state, what this dehydrated form can endure is phenomenal! In naturally occurring conditions on the earth, it shrugs off temperatures ranging from minus 60 to plus 50 degrees Celsius. Laboratory investigations show that they have ‘survivability’ much greater than they could possibly need on earth.

Tardigrada have been preserved in liquid air for up to 20 months, then after being placed on a bed of damp moss at room temperature to thaw out, they immediately resume their normal form and lifestyle. They have even been able to tolerate freezing in liquid helium (-272 deg.) for up to eight hours. Space temperatures without any spacesuit! Absolute zero, the lowest temperature possible, occurs at -273.15 degrees.

This raises all sorts of questions. What happens to the DNA and the genes under such conditions? Apparently very little. So far no mutational effects have been detected in these ultra-deep-frozen little bears.

At the other extreme, they were able to withstand boiling for up to 15 minutes! After only three hours on damp moss, these boiled bears were back on their feet again.

Even though moisture-loving, they are unbelievably resistant to dryness. In a desiccator at a humidity of only 8 per cent, the shrunken form survived for 60 days. They also survived a drying stream of hot air at 92°C for up to an hour.

Their resistance to chemical poisons and radiation has not been fully investigated, but an atmosphere of pure hydrogen, nitrogen, carbon dioxide, helium or hydrogen sulphide leaves them unfazed, as does the poisonous gas used for domestic lighting and heating.

Tardigrada have been preserved in liquid air for up to 20 months, then after being placed on a bed of damp moss at room temperature to thaw out, they immediately resume their normal form and lifestyle.

Their resistance to radiation is literally incredible. These little ‘bears’ were easily able to ‘bear’ being irradiated for 24 hours at an intensity and dose of more than 11,000 times that which would kill a human being!

Remember, even though they are in a dehydrated form, the cellular organelles are present in unchanged form, which makes this resistance even more puzzling. These little creatures appear to be adapted to be able to survive extremes of environment which would not even be imagined to be present after the worst possible full-scale nuclear war!

Evolutionary belief claims that creatures have been given their adaptability by being moulded to their environment by chance mutation and selection. Yet here we see these creatures adapted to survive a range of conditions that have never conceivably been found on earth, for instance the freezing temperatures of outer space.

Perhaps we can begin to see why it is that students are encouraged to skip over the Tardigrada in their early evolutionary training. After all, one would not want to raise confusing doubts about evolution in the minds of young biologists.

To believe that chance and necessity, mutation and selection, have evolved these robust little dwarfs, is a position of pure, speculative faith, not supported by any fact.

Perhaps we can begin to see why it is that students are encouraged to skip over the Tardigrada in their early evolutionary training.

Although the finds are sparse in number, Tardigrada are believed by evolutionists to have a great age; fossils very similar to present-day ‘bears’ are reported from the middle Cambrian (520 million assumed evolutionary years). A very clear-cut find was preserved in Canadian amber. It was given the name Beorn leggi, and the first glance tells us that these were genuine bear animalcules, just as they are living today. Far from showing evolution, we see only continuity of kind, with limited variation.

Why do they have such phenomenal resistance, which can never come to full advantage on earth? Why are they like this, and why do they exist? Evolution cannot satisfactorily answer these questions—evolution cannot be expected to ‘over-equip’ creatures for a host of environments they have never faced.

The creation scientist may answer that it is because it pleased the Creator, in His inexhaustible wisdom, to call them into existence, and to uniquely equip them as He has. They are endowed with capacities, unknown until recent times, which they are never called upon to fully utilize for survival in nature, but which fill us with awe and wonder at the design and planning behind the ‘things that are made’—even such tiny things.