Trust is an important concept in science. Most people believe that scientists strive for truth. But if scientists make sensitive and not-explicitly-mentioned initial assumptions, how much can you trust their conclusions? Human palaeontology is a part of science that deals with the discovery, reconstruction and interpretation of fossil man. If men really descended from ape-like ancestors, there should be many fossils of transitional creatures that are intermediate between these ancestors and men.

Two major assumptions insisted upon by evolutionists are important to this subject. The first is that the descendants of the ape-like ancestors all had faces that gradually became less projecting as they evolved towards modern man. Neanderthals were somewhere in the midst of this facial evolution and still had projecting noses, cheek bones and jaws. It has been generally believed by the evolutionary community that this facial projection started at an early age.1

The second is that the ages at which eruption of the teeth occurred in so-called transitional groups such as Neanderthals were exactly the same as they are in children today (that is, the ages of these children at death can be determined from their teeth by comparing them with children today).

As we shall see, it is never allowed that children in ancient times may have developed more slowly. This might be too close to the account in Genesis which would suggest longer life-spans in the early centuries after the Flood. (Such delayed maturation and longer life-spans might also readily lead to a non-ape explanation for many of the bony features of adult Neanderthals.)

In my research, I’ve been privileged to study four fossils of Neanderthal children. Neanderthals are a grouping of fossils that often have been used as transitional fossils by palaeoanthropologists in the past,2 and presented to the public as drawings of reconstructions, photographs of isolated parts, and reconstructions made of either plaster or combinations of bone and plastic-like material. Were their faces reconstructed accurately? Or, were they reconstructed with the abovementioned evolutionary beliefs in mind? 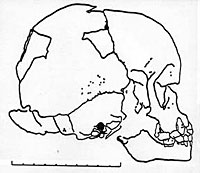 Figure 1. Drawing of original diagram of Pech de l’Aze with lower jaw out of joint and positioned forward, from the article by E. Patte in 1958. Bibliography, Ref. 3. Ruler is in centimetres.

The first Neanderthal child we shall examine is the supposedly 2-year-old Pech de l’Aze from southern France. In his original description, E. Patte in 1958 said that when the teeth are placed in a normal bite, the end of the lower jaw doesn’t contact the concave socket in the head.3 (Figure 1) He said it was a projecting jaw. Ivanhoe exaggerated the same features in 1970.4

Figure 2 shows how wrong they were, because when I studied it, the teeth fitted perfectly together and the lower jaw fitted into the socket. There was no projecting face as in Figure 1. In fact, a detailed study of measurable X-rays found Pech’s face didn’t project as far forward as a modern 2-year-old, but was further back in relation to the forehead than even the modern 1-year-old.5

Here is a ‘custom-built’ transitional fossil with a projecting lower jaw, so made because of the evolutionary belief that men descended from apes, and it is used to support that same belief. This is circular reasoning!

The second Neanderthal child is the supposedly 5-year-old from Gibraltar. British anthropologist Dorothy Garrod in 1928 commented that the small jaws looked as if they didn’t belong with the large head.6 This discrepancy allows two possibilities of interpretation. Either the child was an older one in which the teeth/jaws were delayed (in relation to the way humans develop today) or it was a 5-year-old with an accelerated head. Since the face, teeth and head of the ape develop in an accelerated way compared to a modern human, one can see the reluctance of evolutionists to admit that the ages of tooth development might have been delayed in these ‘prehistoric’ children. 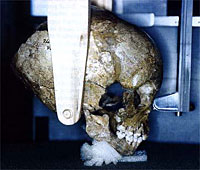 Garrod enumerated 10 features, including remarkable jaw-muscle development, well-worn teeth, infant-like forehead, and infant-like bones around the ear. The first two she should have recognized would indicate an older child based on studies of teeth throughout scientific history, the latter two a less mature child. So how old was he? I don’t think she really knew. Nevertheless, she concluded, ‘the most important evidence is necessarily provided by the teeth. It may be accepted as a good rule that the 1st permanent molars erupt in the sixth year.’6 Based on her unwillingness to depart from the standard evolutionary belief that the ages of tooth eruption in the past were the same as in her own day, the teeth of the Gibraltar child meant that it had to be assigned an age of five years.

However, the original shape of the jaw was much too infantile even for a five-year-old. This uncomfortable fact would have highlighted still further the discrepancies between the stages of maturity of various parts of the skull, adding another reason for calling the teeth and jaws delayed. This would have contradicted the second assumption of the ancient tooth eruption ages being the same as today.

Examining the lower jaw shows that when Garrod or a colleague put the pieces together, they fixed them so it no longer looked infant-like (see Figure 3).

The teeth of the Gibraltar child were remarkably worn, a fact which suggests (along with the size of the braincase, for example) that this individual had lived much more than five years. This again would support the creationist/delayed maturation view, and cause problems for the ‘ape-affinity/accelerated head’ viewpoint, as explained.

When confronted by this evidence of greater age in juvenile Neanderthals, evolutionists commonly respond by saying that young Neanderthals had a tough, gritty diet. This ignores the fact that the baby molars of the Gibraltar child (indeed all Neanderthal children I have examined) were very durable taurodont (bull-like) molars. These could outwear and out-perform the modern child’s baby molars—comparing the two is like comparing radial tyres with old-fashioned tyres. However, this inconvenient fact does not seem to worry palaeoanthropologists today.

The third fossil, the Engis child from Belgium, was determined to be six or seven years of age by Charles Fraipont in 1936.7 This age was stretching things a bit, as he saw loose first permanent molar teeth that hadn’t erupted yet, with almost no root formation. Our children today reach this stage in about three years, but in 1936 it was closer to five years of age.8 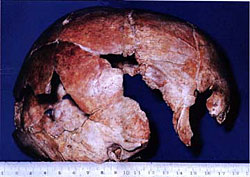 Figure 5. Engis child fossil skull without jaws. Millimetre rule rests under the skull. The maximum length of the skull is 164 millimetres, not 188 millimetres as in Fraipont’s article. Bibliography, Ref. 6.

Fraipont also ran into the same problems that Garrod did with the Gibraltar child. He found some infant-like features in the head, especially a very infantile bony ring around the ear opening, that reminded him of a human fetus. He described this ring very carefully. He also found taurodont baby molars, many other baby teeth, and a small upper jaw that didn’t seem to match a forehead that looked older than five years of age.

The bony forehead showed the beginning of a brow ridge over each eye and a slight elevation above the bridge of the nose. When faced with this mature and older look in the forehead, and the youthfulness of the teeth and ear, he had a dilemma! He couldn’t figure out how old the child was.

The forehead looked as old as 11–12 years, which would have made the teeth really late, because children of his day formed teeth like that in five years.8 This would mean the teeth were delayed. He said that a delay in tooth eruption would be unthinkable. So, he called the teeth normal, meaning very close to the 1936 schedule of appearance in the mouth.

He therefore had to call the head accelerated (relative to modern children of six or seven years of age). This would be in line with his theories of ape affinity. However, it was too small in length to call it really accelerated. It actually was only 164 millimetres (Figure 5). So in his article, he said it was 188 millimetres.7 How did he arrive at this figure? I do not know. Most evolutionists hate miracles, except when it comes to their own fossils.

The fourth Neanderthal child is Le Moustier, a French Neanderthal of supposedly 15 to 18 years of age which is in a German museum. Figure 6 is Le Moustier’s museum replica. The flat forehead and projecting jaws are meant to be convincing examples of our ape heritage. Figure 7 is a diagram of Le Moustier’s souvenir slide bought at the museum counter. Both jaws are approximately 30 millimetres forward of their true position.

Figure 8 is a composite of my X-ray of the actual forehead and my X-ray of the top and back of the head, and Figure 9 is my composite drawing from these measurable X-rays. The large arrow in Figure 8 shows the concave socket where the lower jaw fits into the head. There is a tremendous difference between these X-rays with real measurements and real parts as compared to the ape-like reconstructions in Figures 6 and 7.

To their credit, the German museum people are now trying to put the parts together again, accurately this time, and they have requested my X-rays for this purpose. (For those interested in greater detail and more illustrations please see Creation Ex Nihilo Technical Journal, Vol.8 (Part 2), 1994.)

What are we to make of all this? These examples of fossil manipulations really show that the expression in Proverbs 23:7 is true, ‘For as he thinketh in his heart, so is he’. As a man thinks, so he acts. If your faith is based on the evolutionary scheme of life, all your actions will flow from that base and you will naturally support it with your whole being. So, too, were these palaeoanthropologists carrying out their evolutionary assumptions in their reconstruction and interpretation of the Neanderthal children’s fossils. Using such erroneous methods it’s possible to come up with alleged transitional fossils every time.

The amazing thing about this is that these fossils are being used to ‘prove’ that Neo-Darwinian evolution is a ‘fact’. Again, let me emphasize that this is circular reasoning. And this may be only the tip of the iceberg. When very few people get to closely examine the real fossils, anything is possible. It would be refreshing to see the museums, especially the one in Nairobi, Kenya, where I’ve had an application rejected year after year, open their doors to scientists who might not look at these reconstructions from an evolutionary perspective.

Figure 5 taken with permission of the University of Liège, Liège, Belgium, August, 1982.