The year 1987 marked the 300th anniversary of the publication of one of the world’s masterpieces in scientific literature.

It was in 1687 that Sir Isaac Newton, English mathematician, physicist and astronomer, published his monumental work Philosophiae Naturalis Principia Mathematica (mathematical principles of natural philosophy). In this work, Newton presented his famous three laws of motion: force-free motion is uniform; accelerated motion is proportional to the impressed force; and for every action there is an equal and opposite reaction. From these, together with the law of universal gravitation, the whole science of matter in motion is derived.1

Newton believed in a literal six-day Creation, and that the worldwide Flood of Noah’s time accounted for most geological phenomena. He also firmly believed in Christ as his Saviour.

Sir Isaac Newton is regarded by many scholars and historians as the greatest scientist who ever lived. Yet he also firmly believed that the Bible was God’s Word. He wrote much on biblical subjects, and even wrote a book defending Archbishop Ussher’s chronology of the world (Ussher set the date of Creation as 4004 BC). Newton believed in a literal six-day creation, and that the worldwide flood of Noah’s time accounted for most geological phenomena. He also firmly believed in Christ as his Saviour.

In thinking on the publication of Newton’s Principia, it would be well to reflect on this great scientist’s view of Scripture:

“I find more sure marks of authenticity in the Bible than in any profane history whatsoever.” 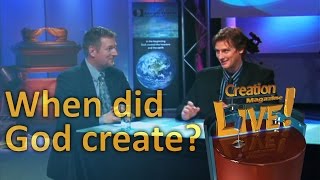