Of Moas and Men

An evolutionist professor admits that while certain fossils can yield useful (even surprising!) information, there are limits

Giant flightless birds up to three metres (10 ft) high that once roamed New Zealand have been frustrating evolutionary scientists trying to make sense of their DNA. They could analyse the DNA because moas became extinct only some 600 years or so ago, and thus scientists have access to the remains of many specimens, as Professor Alan Cooper, a New Zealander at the University of Adelaide, Australia, explains:

“The moa … I’ve been working on them my entire career. I think they’re fantastic things. They’re like an emu but XXL.1 Actually we’ve just reconstructed what they’d look like using feathers from caves all over New Zealand.”2

From analyzing the DNA from these feathers, Cooper said that he and his colleagues were able to identify “which species each feather came from”—and here’s where it got interesting. It turned out that what had been thought to be different species of moa were actually different sexes, as Professor Cooper recounted:

“I’ve been struggling with it ever since my Ph.D. In trying to do phylogenetics3 on moas I had looked at this particular group Dinornis, the one you’ll always see in a museum. If you go to a museum, you see a great big tall moa from New Zealand, that will be Dinornis. The moas come in two versions; tall and thin, and short and fat, and the tall and thin are the Dinornis group. And there were three species and they were found all over New Zealand and there’s hundreds of specimens of them, there’s even mummies of them, and it turned out I could never get any genetic difference between them, and it was driving me nuts trying to get these three species sorted out.”

Cooper and his colleagues found that the representatives of the small ‘species’ were all males—and the distinctly separate big (3 metres, or 10 ft) and medium-sized ‘species’ were all females. And all were one and the same species.

When a species exhibits such sexually-determined, consistent size differences (known as ‘sexual dimorphism’), it’s generally the other way around in birds—the males are the larger. “What we think is happening is that in ratite birds, which are the emu, the ostrich, the moas, these big flightless birds you find across the southern hemisphere, the females don’t incubate the eggs or raise the young, the males do,” Cooper explained. “So it’s actually called reversed sexual dimorphism… .”

This is not the first time that what are purported to be different fossil species are subsequently amalgamated into fewer, or even, as in this case, one species. In recent years the number of dinosaur species has been dramatically curtailed, e.g. because it was found that what had been thought to be different species were in fact juvenile and adult forms of the same species (see Shrinking dino numbers p. 8).4,5,6,7 Or because it was realized that a ‘newly discovered’ fossil species was (incorrectly) named on the basis of incomplete fossil specimens.8,9,10 On that point, let’s give the last word to an evolutionist—Professor Cooper himself. In the light of his work on moa fossils, he let slip this incisive observation about supposed fossil evidence for the evolution of man:

“So the moas have turned out to be just remarkable in so many ways about basic evolutionary processes, and you think you’ve got the whole thing sorted out … and you’ve got to remember they only went extinct 650 years ago and we’ve got thousands if not tens of thousands of skeletons of these things, and we still couldn’t work it out. And if you’re looking at our ability to completely understand human evolution and Africa from the remnants of a few bits of bone and some teeth left behind and we can understand the series of steps between the species, certainly we can see the change, certainly we can understand the general process, but the specifics? If we can’t get it right 600 years ago, how are we going to do it 500,000 years ago with a tiny amount of material?”

How did the moa get to New Zealand? 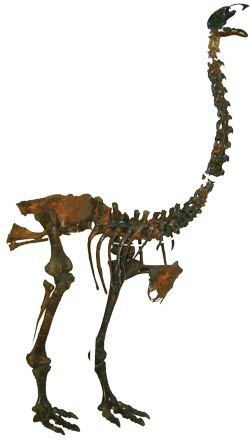 Evolutionists once believed that the giant flightless birds—moas, ostriches, rheas, emus (and cassowaries—see article page 20) were all related and were a ‘primitive‘ group which had not yet evolved the ability to fly. Now they believe the birds ‘evolved’ from flying ancestors and are not from a common stock. But loss of the ability to fly, and having no common ancestor, actually fits the creation model better than an evolutionary one. Losing the ability to fly is of course a loss of information, not a gain, and therefore is not evolution—in the sense of the claim that bog scum became birds. The changes in living things observed today that are so often presented as evidence of evolution are in fact downhill changes—the evolution ‘train’ is going the wrong way!11,12

In contrast, from a biblical perspective, the origin of New Zealand’s fauna including the moa (now presumed extinct13), fits a Creation–Noah’s Ark timeline perfectly. A Genesis historical framework means the earth’s post-Flood land areas about 4,500 years ago were completely devoid of all land animals and birds, as any creature with ‘the breath of life in its nostrils’ (Genesis 7:22) had perished in the Flood, unless it was on the Ark. The process of repopulating the earth with land animals radiating out from the Ark’s landing site in the Middle East was made easier by the presence of land bridges connecting (or almost connecting) Asia to the Americas and to Indonesia/Papua New Guinea/Australia during the Ice Age.14 But the 2,000 kilometres of deeper ocean waters separating Australia and New Zealand proved a most effective barrier to land animals. Hence the only types of creatures on the Ark to have lived in New Zealand before human occupation were those capable of flight—which would have included the ancestors of the flightless moa.

So how did the moa become confined to ground? As the first arrivals began to breed, any hatchlings with some kind of mutational disorder rendering them flightless were able to safely move into a vacant ecological niche that on other continents would have been occupied by ground animals. In the absence of ground-dwelling predators (absent because they were unable to make the sea crossing), the flightless moa (along with the kiwi, kakapo15 and notornis) survived and multiplied.

Eventually, however, people (the descendants of Noah) reached New Zealand’s shores16,17 and it seems that the moa was a particularly attractive target for Maori hunters, and its numbers quickly dwindled. Other impacts from human settlement, e.g. habitat clearing and introduced predator mammals, continue to pose survival challenges to New Zealand’s remaining flightless birds. The extinction threat facing them (in common with many other animal and bird species around the world) is a reminder that we live in a sin-cursed world ‘in bondage to decay’ (Romans 8:19–22) with death an unavoidable reality. Compare this to the original ‘very good’ world in which there were no mutations, and no death of the unfit—a very different world indeed.