As a youngster, I could not at first believe that the colours of the parrot featured on a famous Australian food brand were real. It took some time to convince me that the ‘unbelievable’ colours had not just been painted by an artist, but in fact had occurred naturally.

But what purpose does such striking coloration serve? This question weighed upon Charles Darwin, who in 1871 proposed the idea of “sexual selection” to try to explain, for example, the male peacock’s magnificently ornate tail feathers vs the female’s drab-by-comparison plumage. The peacock evolved its exotic tail because it would be easier to attract a mate, said Darwin, and this idea soon became “part of the canon of evolutionary biology”.1

Today, however, some evolutionists themselves admit to Darwin’s sexual selection theory being seriously, some even say fatally, flawed.2–4

Despite this, they continue to debate various ideas about how evolution might have occurred, while insisting it is ‘a fact’.

And now evolutionists have a further challenge in explaining how parrots got their spectacular hues. Researchers using high-tech lab equipment have found something “both beautiful and a bit baffling.”5

In many birds, red, orange and yellow colouring is conferred by carotenoid pigments (which can be acquired by eating certain plants). But not in parrots. For over a century, biochemists have known that parrots use an “unusual” set of pigments, dubbed psittacofulvins, to produce their rainbow of plumage colours.6 However, their biochemistry proved elusive until recently. Analyzing the red feathers of 44 species of parrots (across 27 genera, i.e. including lories and cockatoos) shows that all species use the same set of five psittacofulvins, unique to parrots, to generate their vibrant red colour.5,7–9

How did the new enzyme systems required to do such complex chemistry come about? One enzyme would not suffice—and even that is beyond evolution!

According to lead researcher Kevin McGraw, of Arizona State University, this defies previous assumptions about colour variations in parrots, and suggests that it is “a pretty important evolutionary novelty”. But he does not explain how this “novel chemistry”8 to generate parrot colouring, found “nowhere else in the world”,5 came into being. For example, how did the new enzyme systems required to do such complex chemistry come about? One enzyme would not suffice—and even that is beyond evolution! And what was the selective advantage for each step? Partly-formed enzymes usually won’t work at all.

Also, this unique red feather pigment “is found only in the bird’s feathers and nowhere else in the body”.8 This means that these pigments do not come from the parrot’s diet but are manufactured directly at the maturing follicles of the growing, colourful plumage.

The real ‘Artist’ behind such beauty was not only responsible for such beautiful colours but also for the living, breathing, intelligent flying ‘canvas’ on which they are painted—one able to reproduce itself many times over.

The evolution of feathers is in itself a major problem for Darwinism.10 Lightweight, yet very strong, feathers enable flight, help control that flight,11 help birds stay dry in rain and snow, and insulate them from cold and heat. It’s no overstatement to say that something as complex as feathers already defies evolutionary explanation—even without having to explain how they then began to manufacture this complex and unique set of chemicals that gives parrots such vivid red, orange and yellow hues.

Surely anyone pondering parrot coloration would logically conclude that they were not the product of randomness, but that an artist was responsible—just as I myself had suspected years earlier. But I hadn’t known then that the real “Artist” behind such beauty was not only responsible for such beautiful colours but also for the living, breathing, intelligent flying “canvas” on which they are painted—one able to reproduce itself many times over. As His handiwork attests (Romans 1:20), He is a Master Artist, indeed.

What’s in a phrase? 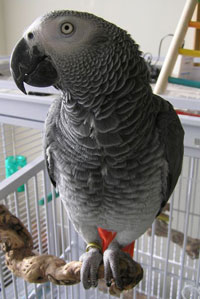 Describing someone as repeating something “parrot fashion” does not refer to these birds’ colourful dress sense. It derives from the presumption that parrots simply mimic people’s words without attaching any meaning to them, and is meant to imply that the speaker, too, has not applied any intelligence to the words spoken.

But researchers have shown what many parrot owners have known or suspected—that parrots can use individual words in appropriate situations. For example, studies by Brandeis University (USA) researcher Dr Irene Pepperberg on an African Grey parrot named “Alex” (pictured right) showed that these birds have an impressive intelligence—about the same as a five-year-old child.1,2 When Pepperberg’s research subjects spoke English, it was not mere “parrot fashion”. She said, “If I ask Alex … how many keys; he’ll tell me ‘two’. If I ask him what colour, he’ll say ‘green’ and if I ask him what shape, he’ll say ‘three-quarter’.” He was able to correctly identify 100 objects, do simple addition and identify seven colours, just as children do.

But if Alex did not want to cooperate, he showed he could deliberately avoid giving the right answer—just as schoolteachers have observed in certain defiant young children who nevertheless know the correct answer.

This, and documented examples of high intelligence in other birds,3 highlights a problem for evolutionism. If chimpanzees, not birds, are “our close evolutionary cousins”, how is it that birds, which also have much smaller brains, can surpass chimps in various measures of intelligence?

When Alex died in 2007, Dr Pepperberg spoke of her last conversation with him—in the evening, when she told him it was time to go in the cage.4 The bird said, “You be good. I love you.” Pepperberg answered, “I love you, too.” Alex then said, “You’ll be in tomorrow,” and she replied, “Yes, I’ll be in tomorrow.”