The most colourful of the native Australian songbirds is the Gouldian finch (Chloebia gouldiae1), shown in the photo below. Its purple, gold, green, blue and black plumage, coupled with a face that may be red, orange or black,2 make it a favorite among bird fanciers. 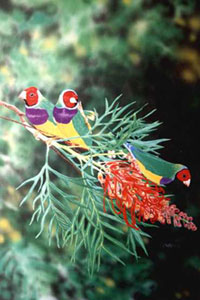 Native to the grassland regions of far northern Australia, it makes its nest in a loosely-built rounded structure woven of dry grass. This is placed in grass, a small bush, or in a hollow in a tree or termite mound.3

Since they mostly have to feed their young in spaces with little light, Gouldian finches exhibit a fascinating design feature. In the young nestlings, there are two pairs of pearly-iridescent, bluey-purplish nodules at the margin of the beak. These are placed, one just above and one just below the beak opening, set back towards the rear. These nodules (also sometimes called tubercles or papillae) can be clearly seen on young finches inside the nest.

In conditions of dim light, such as would occur on most occasions inside the nest, these nodules readily pick up and reflect the faint light from their surroundings. Although they produce no light of their own, they appear to ‘glow’ in all but total darkness.

Their obvious purpose is to act as guides for the parents of the youngsters, so they can unerringly find the right spot into which to place the food they bring to their offspring.

The nodules are not apparent in the adult, in which they are no longer needed. The DNA of Gouldian finches thus has in it the precise information coding for the exact placement of these nodules, their light-reflecting construction, the timing of their appearance and later disappearance, and the programmed instincts which tell the parent bird to aim in a certain way, using the relative position of these bright structures.

The evidence of the intelligent, wise Creator, exhibiting plan, purpose and forethought, pervades even this fallen, once-perfect world. What wonders there must have been in Eden!