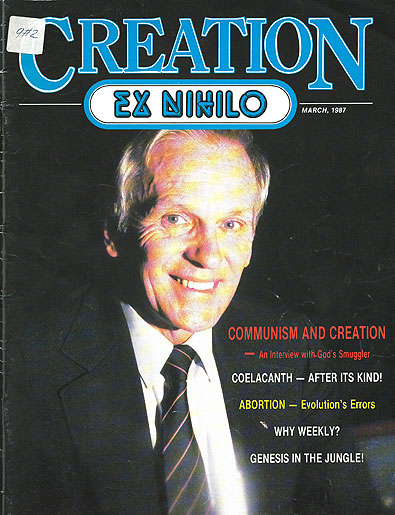 What is the origin of the names we use for the days of the week? It doesn’t take long to discover they are identified with seven pagan gods associated with the five major planets plus the sun and moon. This planetary week was popularised by the Romans, and spread at the same time as Christianity.1 ‘Planet’ in the original sense meant ‘wanderer’, as opposed to fixed star, and these ‘wanderers’ across the sky were seen to be different from the stars. Names of Germanic gods eventually replaced the names of Roman gods as the basis for our English week day names (see Table 1).

The early Christian church numbered the days of the week, following Jewish practice, to avoid using the names of heathen deities. Interestingly, the Greek Orthodox Church still follows this practice, except that the first day of the week is called the ‘Lord’s day’.

But why are the days in the given order? Is the order arbitrary, or is there some rational explanation for it? The oldest answer appears to be in the writings of Dio Cassius.2 He gives two alternatives of how the established arrangement of the week days may be obtained from the ‘correct’ order of the planets, which he gives as starting with Saturn and ending with the moon.

His first (and rather unconvincing) explanation involves the musical principle of the tetrachord—a series of four musical notes—to skip to the fourth deity each time. His second explanation runs as follows: In astrology every hour has its presiding deity who exerts his influence in that hour. Each hour of the week is assigned in turn to one of the seven deities, and the deity who controls the first hour of each day is the regent of that day and gives his name to it.

In Table 2 we have set down Dio Cassius’ complete scheme, based on the assumption of a 10-hour day. It will be clear from this how the accepted order of the days results from the ‘correct’ order of the deities associated with the planets.

Dio Cassius actually explains the scheme in terms of a 24-hour division of the day (it will be found that 24 hours give the same result, but not, say, 12 hours). He says it is of Egyptian origin. If the Egyptians were using a 10-hour day in the first century BC, as some historians suggest, they could still have devised the scheme, as Dio Cassius claims. Where or when the 24-hour day originated is not known.

First day of the week

The above explanation seems to put Saturday as the first day of the week. However, there is evidence that the Jewish Sabbath was identified with Saturn’s day in the first century BC. Dio Cassius tells of the Roman attack on the temple in Jerusalem, a success on Saturn’s day because the defenders would not fight on that day.3 There is a suggestion in the writings of the Roman poet Tibullus (who died in 18 BC) that the Jewish people were thought to be Saturn worshippers.4

However, there is evidence that the Jewish Sabbath was identified with Saturn’s day in the first century BC.

The planetary weekday names were later accepted by the Roman branch of the church, and hence ‘Christianised’. Jerome says of Psalm 118:24, ‘Why is it called the Lord’s day? Because on it He ascended victoriously to His Father. But if the Gentiles called it the Sun’s day, we gladly admit it. For in this day the light of the world rose, on this day the sun of righteousness rose.’5

The week in ancient history

Note also the historical evidence for different types of weeks before the development of the planetary week:

Some historians suggest a development of the Jewish week from the Babylonian week in about 600 BC,9 but without clear historical evidence. Other historians, who would seem to be more thorough, conclude differently: “The week of seven days was thus completely independent of the month [in contrast to the Babylonian and Assyrian week].”10

Having exhausted the extra-biblical historical evidence of a week, we can turn to the most reliable source of history we have—history concerning God’s dealing with man, and His chosen people.

If we accept the biblical account, we find the Jewish people keeping the Sabbath well before historical references to the Roman or Babylonian weeks. At the very commencement of Israel as a nation, we find God revealing the sabbatical week to His people. Even before the giving of the Law, when God provided the manna miraculously, He gave it in such a way as to teach His people about the sabbatical week. On the sixth day there was sufficient manna for two days, so the people did not need to gather any on the Sabbath—when none would be provided. If they gathered more than they needed on other days, it would spoil. But not on the sixth day (Exodus 16). A miraculous provision indeed! This, like the Sabbath day itself, was to emphasise man’s utter dependence on his Creator.

When Moses received the Law at Mount Sinai, the first thing God revealed to him was the Ten Commandments, which of course included the command about the Sabbath (Exodus 20:8-11). And the last thing God said to him before he came down the mountain with the tablets, was to keep the Sabbath (Exodus 31:12-17). Keeping the Sabbath was a sign of the covenant between God and the nation of Israel—a testimony to an unbelieving world that this people was sanctified by God (Exodus 31:13).

If we accept the biblical account, we find the Jewish people keeping the Sabbath well before historical references to the Roman or Babylonian weeks.

But the week had its origin well before this—more than 2500 years before Moses’ day, at the very beginning of time. When God created the heavens and the earth He created it all in six days, then rested on the seventh. In both Exodus chapters 20 and 31, we find God giving the reason for the week as the pattern He set in creation (Exodus 20:11 and Exodus 31:17). He took seven days in creation specifically to set a precedent for man, who is the pinnacle of His creation and indeed the very reason for the whole creation.

Genesis chapter 1 could not be much more specific about the fact that God took six actual days to complete the Creation. The writer of Genesis couldn’t say a 24-hour day because hours apparently were not reckoned until a few thousand years later. ‘The evening and the morning’ indicates a normal 24-hour day with a light half and a dark half.

Where else could the week come from? It is not related to any astronomical observations, as are the day, the month and the year. It exists because God specified it. He clearly tells us it reflects what He did in the Creation week. Who is able to contradict Him? We weren’t there. No historian was there. Nor was Adam, the first man, until the sixth day of the Creation week. This makes it impossible to argue with the historical facts that God Himself gives us.