A recent skull find in Africa made many think that it somehow ‘proved evolution’.

A million-year-old skull found in Ethiopia confirms the theory that modern man evolved from a single pre-human species that developed in Africa and migrated throughout the rest of the world … .’1

That was the introduction to a CNN Internet article about the (then) latest alleged ape-man find. It concerned a so-called Homo erectus skull, details of which were published in Nature2 and announced throughout the world. The average reader of this Web introduction might think that this specimen is supposed to have somehow confirmed that people evolved from subhuman ancestors. But even evolutionists reading this would have to agree that this was not the point being made, in fact.

The author(s) of the article, and the researchers cited, all commence their thinking, and all their interpretations of the facts, from within a framework in which one already believes that man evolved. After all, if they didn’t, then the only alternative would be to accept special creation, which is invariably (and inappropriately) ruled out beforehand.3

The generally accepted evolutionary thought framework has long been locked into the view that Homo erectus is a subhuman species, i.e. an evolutionary intermediate between today’s humans and earlier, even less human, alleged ape-like ancestors.

Creationists have generally claimed that there is nothing in H. erectus specimens which is outside the range of human variation.4 This seems to be confirmed by evidence of their artifacts and, thus, behaviour. I.e. they are likely to have been just another type of human resulting from the sudden burst of genetic diversification after Babel. A previously intermarrying gene pool was broken rapidly into isolated subsets.

Not so long ago, the cover of Time featured a drawing of the face of a male Homo erectus. If that individual were to wear a hat, hiding his receding forehead and prominent brow ridges (features which are, in isolation, not unknown among today’s populations), he would not even warrant a second look. Inside, the magazine also showed an unclothed erectus, full length. It was clear that below the head, he was identical to a tall, modern Olympic athlete. The image could not have been further from the stooped, knock-kneed ape-man fantasies of earlier depictions.

So what is the new fuss all about? Shouldn’t it be a case of, ‘Yawn, just another Homo erectus skull has been found’? The answer is that it is all about debates among evolutionists, arguing about different ideas of how humans evolved, not whether.

The situation was this. Until the mid-1980s, most evolutionists believed that the erectus skulls found in places like Asia and Europe had all emerged from an original erectus population which had arisen in Africa. Then, later, others started saying that the skulls in Africa were a little different, and represented a separate species, which they named Homo ergaster, that is thought to have evolved into erectus.

This recent skull discovery has been made in Africa, and the skull is ‘dated’ (using the usual evolutionary assumptions) at one million years. It is a classic erectus skull, which seems to confirm the earlier view. This has caused people to reassess the whole matter of ergaster, with many now saying that ergaster never existed. I.e. they now point out that the differences between ergaster and erectus were, all along, too minor to call them a separate species. They were just a part of the range of variation in one group.

In other words, where once evolutionists could talk of ergaster, erectus and sapiens as three separate Homo species,5 now these are reduced to erectus and sapiens. Study leader Dr Tim White, co-director of the Laboratory for Human Evolutionary Studies at the University of California, Berkeley, points out the widespread occurrence of what’s known as taxonomic splitting:

‘There’s been a recent tendency to give a different name to each of the fossils that comes out of the ground, and that has led to what we think is a very misleading portrayal of the biology of human evolution.’1

Other evolutionists are not convinced that H. ergaster and H. erectus are the same species, despite the evidence confirming the tight anatomical overlap of features. However, this only highlights how all such matters involving classification of fossil bones are, by their very nature, highly subjective. It is not at all unreasonable, in the light of that subjectivity, for the creationist to maintain that there should really only be one Homo species acknowledged, namely Homo sapiens.

They do believe that the individuals whose bones have been labelled erectus were the evolutionary ancestors of modern people (as were Neandertals, in their view).

This is actually consistent with what certain evolutionary paleoanthropologists, most notably Milford Wolpoff of the University of Michigan, have been saying for some time now. They do believe that the individuals whose bones have been labelled erectus were the evolutionary ancestors of modern people (as were Neandertals, in their view). But they seem to believe that the similarities are such that all Homo erectus specimens, along with Homo neanderthalensis and others, should really be called Homo sapiens—which means, in a nutshell, people.6 And recently, Wolpoff et al., showed that the features of various human skulls indicated that there must have been interbreeding among modern-looking Homo Sapiens and Neanderthals and even Homo erectus—thus making them the same biological species, by definition.7

There is evidence associated with erectus of many human cultural attributes, including burial of their dead, the use of ceremonial ochre, stone tool making, and even complex seafaring/navigation skills.8 And as we reported recently, Neandertals are now known to have manufactured a high-tech ‘superglue’ as well.9

So, like the ten green bottles on the wall, now we would be back to one Homo species. A recent paper by creationist John Woodmorappe concludes—on evolutionists’ terms—from the analysis of a number of characteristics, that Homo ergaster, Homo erectus, Homo heidelbergensis, and Homo neanderthalensis were most likely ‘racial’ variants of modern man, while H. rudolfensis and H. habilis were just types of australopithecines.10

When the entire human gene pool was broken up suddenly at Babel, different groups took different proportions of that gene pool with them, giving rise to many people groups, or so-called ‘races’. These have superficial fixed differences in the proportion and frequency of certain features. E.g. some have more skin pigment, some less. But genetic studies on the living descendants of those groups shows that they (we) are all astonishingly closely related, not surprisingly. We all have the same skin pigment, for instance, just different amounts of it. And all people groups can freely intermarry, resulting in a closer approximation to the genetic richness that would have characterized Noah’s family. In fact, there is a wider variation within a ‘race’ than between different ‘races’, which is why biologists regard ‘race’ as a biologically meaningless concept.11

Similarly, the range of variation in bony features among these early post-Babel humans, some groups of which have since died out (e.g. Neandertals) is easily explained on the same genetic basis.

So, next time you see certain newspaper announcements of the latest ‘skull’, remember that often the reporters concerned have only the fuzziest idea of what is being discussed. Also, they are viewing and interpreting those facts through the ‘lens’ of a framework which assumes human evolution, so can hardly be used to prove human evolution. As one person put it, ‘Fossils are fickle. Bones will sing any song you want to hear.’12

In any case, neither the researchers nor the reporters will generally have the opportunity, will or incentive to see the same facts through the ‘lens’ of the real history given in the Bible. 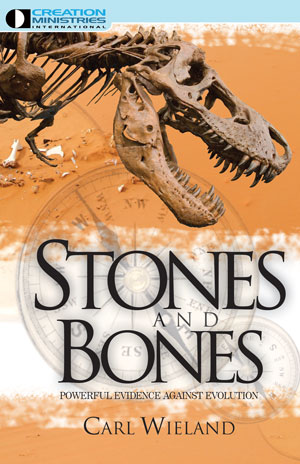