The Gospel in time and space

Modern science has no difficulty with the idea that the familiar three dimensions (length, breadth, height) are not all there is to reality. Knowing this can make our concept of God’s workings easier to understand.

The Bible tells us that God inhabits eternity (Isaiah 57:15), that He dwells in Heaven (e.g. Deuteronomy 26:15), and also in light (1 Timothy 6:16). For convenience we could sum this up by saying that God lives in the heavenly dimension or the dimensions of eternity. By contrast, we live in a world of three dimensions of space (length, breadth, depth) and one of time.1

Although God is omnipresent (present everywhere) in both the dimensions of eternity and in our universe, He also appeared in our world in specific ways at specific times. For example, the Spirit of God moved upon the face of the waters at Creation (Genesis 1:2), Jehovah God appeared to Moses in the burning bush (Exodus 3:4–14), and God the Son left the eternal dimensions (John 1:1–2; Philippians 2:5–7) and entered our world in a special way at the Incarnation (Matthew 1:18; Luke 1:35; John 1:14). After the Resurrection, Jesus appeared to His disciples on several occasions, including twice in a locked room (John 20:19–31), and at the Ascension Jesus left our world and returned to the heavenly dimension (John 20:17; Acts 1:9).

The purpose of this article is to seek to understand these phenomena a little more clearly, using the allegory of Flatland.2

Let us imagine a land of two dimensions, having length and breadth but not height, called Flatland, represented by ABCD in Fig. 1. It is inhabited by intelligent beings, shown as triangles inside circles, all of whom also occupy only two dimensions. One day the Flatlanders awoke to find that someone unknown had drawn the line EF across their land. This effectively divided their country in two because, without the dimension of height, no one could jump over, or tunnel under, the line to get to the other side. Nor could anyone communicate any information from one side of the line to the other. EF was thus an event horizon (see box).3

One day a shape (the outline of a footprint) appeared in the area ABFE (Fig. 2), apparently spontaneously and without cause, as far as the Flatlanders were concerned. Then the shape disappeared. The next time the shape appeared, in order to secure it, the Flatlanders drew a line around it (Fig. 3). For the two-dimensional Flatlanders this was an event horizon, meaning that nothing could get out of the area enclosed by the circle, and nothing could get in. Nevertheless, when they checked by removing part of the circle, the shape had disappeared. The Flatlanders now had a threefold situation to deal with:

The concepts of Flatland, extra dimensions, event horizons, and so forth as presented here come from a 1987 book, The Scientific Alternative to Neo-Darwinian Evolutionary Theory by the late Professor-Dr Arthur E. Wilder-Smith (1915–1995).

Wilder-Smith was a giant among his peers in the world of science, obtaining three earned doctorates. Master of seven languages, he was also an original thinker and one of the great pioneering figures of creation science.

Among his best-known other works were Man’s Origin, Man’s Destiny; He Who Thinks has to Believe; The Creation of Life, and The Natural Sciences Know Nothing of Evolution.

The notion of Flatland (though without Christian applications) was first put forward in an 1884 book by Edwin Abbott, Flatland: A Romance of Many Dimensions.

The solution to all these problems was given by a whimsical character named Dr Zweisteinus. He first reminded the Flatlanders of their scientific materialism, namely they believed that the two dimensions of Flatland were the sole expression of reality-at-large and they based their lifestyle on this untruth. He went on to say that Flatland was not the only reality and the appearing and disappearing shape pointed to the possibility of there being at least a third dimension besides the two that they knew of—length and breadth. This third dimension he called ‘altitudo’ or ‘depth’ or ‘height.’

He said that the 3-D being that made the foot-shape could both enter and extract itself from the 2-D prison (the 2-D event horizon) merely by stepping over it, because a 3-D being can be neither locked out nor locked in by any of the 2-D barriers that restrain 2-D Flatlanders. ‘Two dimensions cannot take anything possessing three dimensions hostage! The extra dimension gives a total freedom over the lesser dimensions.’2 A 3-D being could thus manifest itself in Flatland at will, and could intimately observe the Flatlanders without their being aware of it. Even their insides,

, invisible to other Flatlanders, could be seen.

Let us now relate this concept, called dimension theory, to some of the events recorded in the Bible.

The information necessary for creation to occur existed in the mind of God, the Logos (John 1:1 Greek logos=Word), outside space and time, and before these were created. That is, all creation existed in the mind of God, ‘before the foundation of the world’ (Ephesians 1:4; 1 Peter 1:20), and thus in the dimensions of eternity. God passed the information (and power) needed for the creation to occur, across the event horizon that separates eternity from space-time, in separate quanta or amounts, throughout the six days recorded in Genesis 1.

When Adam was formed and until he sinned, he was a hybrid (dimensionally speaking). In the Garden of Eden, he walked with God, who inhabits eternity, and he thus experienced something of the multi-dimensions of eternity, but he also existed in space-time. When he disobeyed God, God expelled him from Eden to prevent him from eating from the tree of life and living forever (Genesis 3:22, 24) in a sinful condition. 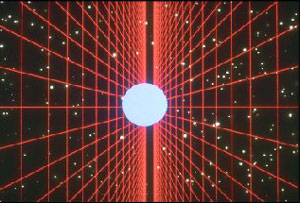 The fact that science has no problem conceiving of dimensions in addition to the ones we experience daily gives an interesting way of making many biblical concepts more tangible. But it can be taken too far—trying to make the eternal God fit the changing views of the moment. For example, a well-known ‘progressive creationist’ (who also often uses Wilder-Smith’s ‘flatland’ concepts) leaves audiences thinking that science has proven that there are exactly ten dimensions and that somehow this finding confirms the Bible.

First, there is no biblical teaching that says anything about this. Second, this shaky notion was based on a highly abstract and contentious branch of physics known as string theory. This theory has since been dropped in favour of superstring theory, also lacking in experimental support, which postulates eleven dimensions. According to its proponents, the reason some of these hypothetical dimensions are not seen is that they are rolled up into incredibly tiny spaces.

It has truly been said that Christians married in their thinking to today’s science (e.g. big bang, ten dimensions, etc.) will be widowed tomorrow.

However, man was made for eternity. So God has provided a way whereby we can be reunited with Himself. Whereas Adam’s sin closed the event horizon to the heavenly dimension for mankind, the forgiveness of sin opens this event horizon. This forgiveness comes through the death and resurrection of the Lord Jesus Christ, who paid the penalty for sin; it is accessed only through individual repentance and faith. Those who access God’s forgiveness in this way experience fellowship with the eternal God in this life (John 1:12; 17:23), in a much more limited way than Adam did originally, and they will be united with God in the next life.

The Resurrection appearances of Jesus

When the Lord Jesus Christ rose from the dead, His resurrection body left this space-time world and entered the dimensions of eternity, passing through the grave clothes without disturbing them. It was the sight of the napkin which had been wound around the head of Christ ‘wrapped together in a place by itself’ (i.e. still wound, and stiffened by the sticky mixture of myrrh and aloes used in embalming), which caused the Apostle John to believe in the resurrection (John 19:39–40; 20:7–8). Although John might not have been aware of dimension theory, he realized, in effect, that Christ had transcended the dimensions of time and space.

As with the footprint in Flatland, Christ could appear in the locked room, or appear to and disappear from the disciples (e.g. on the road to Emmaus), unaffected by the event horizon that totally prohibits us from performing the same actions.

At the Ascension (Acts 1:9), Jesus crossed the event horizon between space-time and Heaven. Now, when believers pray, they access the risen Lord Jesus, through the Holy Spirit, who dwells in believers by faith (John 14:16–17).

When a person dies, his/her soul/spirit exits this space-time world by crossing the event horizon of death. This is the boundary at which space and time end and timelessness begins. In the Bible, God tells us that beyond death there are Heaven, Hell, and judgment to come (‘it is appointed unto man once to die, but after this the judgment’—Hebrews 9:27). The latter decides which of the two former we end up in, based on our faith (in this life) in Christ’s atoning death and resurrection.

Heaven, Hell, and the final judgment all exist or occur within the dimensions of eternity. They can therefore never be examined by science, because they are all hidden behind an event horizon (see Extra dimensions and God—a caution).4 This, however, does not mean that they are not real. The concept is perfectly scientific, and they are in fact the ultimate reality. The materialistic credo propounded for so long by atheists, that the ‘here and now’ of our space-time continuum is the only reality, is thus seen to be scientifically unsound. Skeptics, atheists, and others ignore this at their peril. 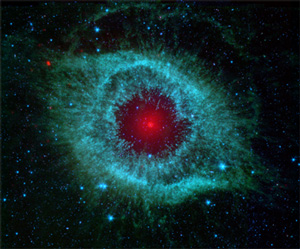 When astronauts went to the moon, their spaceship had to attain a speed of more than 11.2 km/sec (25,000 mph), called the escape velocity,1 so they could break loose from the pull of Earth’s gravity. Now imagine a sufficiently massive star, undergoing gravitational collapse, until its gravity was so strong that the escape velocity was 300,000 km/sec (186,000 miles/sec), or the speed of light.

Einstein’s theory of general relativity predicts that within such a region, space would be so curved that no light, or anything else, could escape. Therefore the star would be invisible (and so detectable only by its gravitational effects on nearby matter). The result would be a black hole,2 defined by Stephen Hawking as: ‘a region of space-time from which nothing, not even light, can escape, because gravity is so strong.’3

The boundary of a black hole, where light from outside goes into orbit, or light rays from inside the black hole just fail to escape, is called an event horizon.4,5 It represents the point of no return around a black hole. The reason for this name is that no event can ever get out of this area, as there is no means of communicating the occurrence of any events. Thus whatever happens within a black hole cannot be known by an observer from outside and hence cannot be known by science. This phenomenon has been called ‘cosmic censorship.’6