Prof. Stuart Burgess, BSc, PhD(Brun), CEng, FIMechE, is Professor of Engineering Design, Department of Mechanical Engineering, University of Bristol (UK). He is a world expert on biomimetics (imitating design in nature), and leads the Design Engineering Research Group at his university. Dr Burgess is the author of over 40 papers published in secular science journals, and another 50 conference proceedings. He has also registered 7 patents.

I well remember the first time I heard Prof. Burgess give a lecture—on “Hallmarks of Design” in the natural world—at the 7th European Creationist Congress in 2000, one of the conference highlights for me. Here was a committed Christian and experienced engineer turning his design eye on the biological wonders of the natural world, and Stuart’s book of the same title had just been published.2 He has since authored books on topics as diverse as the stars and human origins.

the helpful and important distinction between the perfect design concept of the human body—the skeleton and joints and so on—and the imperfections and flaws in its application.

But do real scientists and real engineers treat Genesis as history? Well, regular readers of Creation will know the answer to this question is a firm “Yes!” By any standard, Stuart is an accomplished engineer, having published widely in his field, and he himself is the co-editor of a scholarly journal. At various stages in his career his contributions have been recognised by prestigious awards. Here are just a few highlights. Back in 1986, he won the “Design Council Molins Prize for Engineering Design”. Then in 1993, he was presented with the “Worshipful Company of Turners Gold Medal for Engineering Design”. And as recently as 2008, he was rewarded with the “Wessex Institute Scientific Medal”.

Understandably then, CMI was delighted when Stuart agreed to take part in our major docudrama film about Darwin: The Voyage that Shook the World. He was one of a few biblical creationists among the fourteen interviewee experts3 and his contribution was invaluable. For example, Stuart makes the helpful and important distinction between the perfect design concept of the human body—the skeleton and joints and so on—and the imperfections and flaws in its application. Of course, the Bible reveals that these “bad things” are the consequence of the Fall of humankind, so that God’s originally perfect human design is now frustrated by the Curse.

Recently, I asked Stuart how he first got interested in engineering:

“When I was a child I was always building cars and houses with Lego and this got me interested in designing for a job rather than just for fun. I feel very privileged to have worked for the European Space Agency on several big space projects and I now really enjoy my teaching job and researching engineering design at Bristol University.”

So is it more difficult for engineers—who spend so much time considering designed objects—to embrace Darwinian evolution than it is for biologists? Stuart explains:

“Yes, for two reasons. Firstly, since the design by human beings is not limited by the step-by-step change that evolution is limited by, human engineers should produce designs which are far more sophisticated than those found in nature. Yet the opposite is true. Nature has by far the most sophisticated designs. A second reason is that engineers know that you cannot design by making random mistakes. If you randomly change a single parameter in a car engine it will always result in a retrograde step. Design improvements always require careful planning and careful changing of many parameters at the same time.”

Stuart has ample experience of this, including working on the design of a solar array for the hugely expensive Envisat ESA satellite, as he explains:

“The Envisat satellite cost £1.6 billion4 and has hundreds of thousands of components and several million separate pieces of design information, like dimensions and material properties. It would only have taken one or two errors in the design information and the whole mission would have failed. This kind of project illustrates how difficult design is and how design does not happen by chance.”

Dr Burgess is impressed with many designs in the natural world, but one stands out to him:

“My favourite evidence is the peacock tail feather. It has beautiful iridescent colours produced by thin film interference. The feather has layers of keratin with precision thicknesses comparable to the wavelengths of the individual colours of white light. The feather barbs are also incredibly well aligned to produce mathematical patterns like ellipsoids and cardioids.5 The design of peacock feathers is so precise that engineers cannot replicate it. Yet the feathers seem to exist purely for decoration! I think that the peacock feather shows not only that there is a Creator but that the Creator is supremely wise and very caring. I have no doubt that God wanted humans to enjoy the beauty of the peacock feather.”6

Dr Jonathan Sarfati discusses many more amazing examples of such exquisite structures in his book By Design, the subtitle of which is very apt: Evidence for nature’s Intelligent Designer—the God of the Bible.7 A recurring theme in the book is the way in which today’s biologists are mimicking things they observe in the natural world. Stuart explains why engineers are so interested in this burgeoning field:

“Biomimetics involves copying or being inspired by design solutions from nature. Engineers are very interested in biomimetics because the natural world contains supremely optimized design. For example, birds and insects are supremely well designed for flight. Birds have inspired aeroplane designers for many years, including the Wright brothers who invented aircraft turning mechanisms after studying how birds turned in the air.

“Flying insects like dragonflies are another strong evidence for design because their flight mechanisms (and navigation systems8) are incredibly sophisticated, although evolutionists regard dragonflies as “primitive” insects that appeared many millions of years ago. My own research group at Bristol University is developing micro air vehicles based on the wings of dragonflies. We have filmed dragonflies with high speed cameras and recorded the exact flapping and twisting motion of their wings. We have then produced linkage mechanisms that can copy that motion in man-made micro air vehicles.”9

So God’s designs set the standard to which engineers aspire in their work, even if they don’t always acknowledge this. I wondered whether Stuart found that people were sometimes happy to discuss “Intelligent Design” (ID), as long as the nature and identity of the Designer were ignored. Also what did he think of the contention of some people who argue that we should leave the second aspect out of the discussion?

“Sadly, I find that many scientists do not want to discuss ID or the question of the Designer. But there are some who only want to discuss ID. One reason for this is that they are worried by the implications of there being a Creator, that they are then accountable to that Creator. Another implication is that they have a responsibility to give credit and glory to the Creator. But there are serious implications to every theory, including the big bang and evolution. If the big bang theory were true, then the Earth and man would be unimportant because we are lost in eons of time and megaparsecs of space. If evolution were true, then it would mean that the world had been created via a process of violence and death. So the fact that ID and creation have serious implications is not in itself a reason to avoid debating ID and creation.”

This brings us to the nub of the issue—whether or not we are the purposeful Creation of Almighty God? Stuart explains how his Christian faith connects with the work he has been involved in all these years.

“Engineering is a great profession for a Christian because it involves creativity. Man’s ability to create is one aspect of our being made in the image of God. The difficulty of designing and building things that are relatively simple makes you realize how great is the wisdom and power of God who has made all things.”

What would he say to those who argue that one’s Christian faith and convictions about the Gospel of the Lord Jesus Christ are largely separate from the issue of origins, and separate from the meaning of the text in the early chapters of Genesis?

“The doctrine of Special Creation is important because it helps remind people there is a personal Creator who was involved in the detailed design of man. Believing in Special Creation also helps people to appreciate God’s skill in creating such a vast array of intricate plants and creatures. I think it is very important to believe in a historical Adam and historical Eve. If you start to compromise by, for example, accepting evolution and ape-men, then the theological problems are very serious. If Adam and Eve were descended from an ape-like creature, then you have to argue that their immediate ancestors, though looking completely like humans, were not actually made in the image of God. This goes completely against what Genesis teaches and it also goes against the fact that God has the supernatural power to create in an instant. When Jesus turned water into wine and gave sight to the blind, He used His supernatural power to do this in an instant. I think the key to accepting Genesis as a literal account is to remember that God is infinite in wisdom and power. When you really grasp this, then you realize that creating the world in six days was never a problem for God.”

Amen to that! Thank you Stuart, very much. 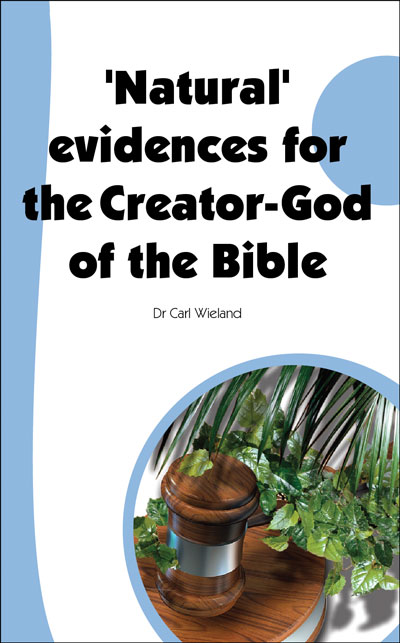 'Natural' evidences for the Creator-God of the Bible
by Dr Carl Wieland
US $0.75
Soft Cover