On the fourth day of Creation Week, God made the sun, the moon, the planets, and all the stars—billions of them! He just commanded them to come into being, and they did. How awesome is the power of God!

God made them all for our benefit. The Bible says their purpose was to give light on the earth, with the sun to light up the day, and the moon to light up the night. They were also to be signs to mark seasons, days and years.

The sun and moon—Earth’s special lights

The sun is the huge star at the centre of our solar system. It is so big that if you wanted to fill the sun with Earths, you would need one million of them. It is made up of white-hot hydrogen and helium gases. The temperature at the sun’s surface is about 6,000ºC, while at the centre it is over 15,000,000ºC. (Water boils at only 100ºC.)

The sun’s energy comes from continuous nuclear reactions at its centre that turn its hydrogen into helium, as happens in a hydrogen bomb. Despite this, the sun’s output is mostly heat and light, with little dangerous radiation (and even this small amount is mostly blocked by our atmosphere created on Day 2). This is just right for the support of life on Earth.

When God made our solar system He did it just right. Earth is about 150 million km (93 million miles) away from the sun. This is exactly the right distance to hold the temperature between 0°C and 40°C on most of the earth. This is the temperature needed to sustain most life. If we were just 5% closer to the sun, the oceans would boil and the water would all evaporate. If the earth were only 5% further away, the oceans would freeze.

Earth’s orbit around the sun is nearly a perfect circle. If the orbit were oval-shaped (like an egg), the earth would become blazing hot as it approached the sun and deathly cold as it moved away from it.

The moon is Earth’s own special satellite. It reflects the sun’s light onto us, even when the sun is on the other side of the earth. It is a rocky place, with no atmosphere and no water, and huge extremes of temperature. It orbits (circles around) Earth every 29½ days. In the days before modern calendars, farmers would count the number of new moons to work out the right time to plant their crops. (In some parts of the world today, farmers still do this.)

If Earth’s speed of rotation about its own axis were much slower than it is, our days would be unbearably hot, and our nights freezing cold. If the rotation were much faster, the wind would blow so strongly that you wouldn’t be able to stand up in the open. The length of each day and night is also just right for the amount of sleep we need.

The pull of gravity on the earth by the moon and the sun causes the tides. (At the beach, when the sea level is high, we say ‘it’s high tide’ or ‘the tide is in’. Six hours later, we say ‘it’s low tide’ or ‘the tide has gone out’.) Tides cleanse the ocean’s shores, help put oxygen (that fish breathe) into the water, and help keep the ocean currents moving, preventing the sea from becoming stagnant.

The huge planet, Jupiter, with its strong gravity, is in just the right position to pull many comets and meteors away from crashing into Earth and killing us all.

God certainly knew what He was doing! He made everything just right. The Bible says that His eternal power and divine nature can be seen from the things He has made (Romans 1:20). 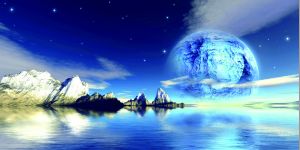 Atheists—people who don’t believe God exists—have huge problems trying to explain all this. How come Earth’s temperature is just right for life, if not due to God’s plan?

The fact that there are several theories (all with problems) as to where our moon came from shows that they just don’t know.

Another question they can’t explain is: why do three of the planets, Venus, Uranus and Pluto, all rotate in the opposite (or retrograde) direction to the other planets? If the planets all formed the same way they should all be rotating in the same direction.

What about the big bang?

Many atheists use the idea of a ‘big bang’ to try to explain how they think the universe formed itself without God. But were they there to see what happened? No! They say that first of all there was absolutely nothing. But then, they claim, all the energy and matter contained in all the billions of stars in the universe was somehow there, squeezed into a single point, which suddenly ‘exploded’. This somehow formed lots of hydrogen gas, which spread out and filled the universe. Then the clouds of hydrogen gas started to pull themselves together by gravity. These clouds got hotter and hotter until they each formed a star. Then these stars exploded and formed all the other elements, like carbon and oxygen, that make up all the stuff in the universe (and you and me).

But where did the first energy come from? How could it all have been contained in a single point? What made this point ‘explode’? And who ever heard of ‘an explosion’ making order and design? What happens when fireworks explode? You get a bang, certainly, but all you have left is a big mess!

There are lots of sound scientific reasons why the big bang idea is wrong, could not work, and simply did not happen.

In fact, it takes far more faith to believe in the made-up story about a big bang than it takes to trust that Almighty God made the sun, the moon, the stars, and everything in the universe the way He says He did in the Bible. After all, God was there, so He knows what happened, and He has told us. ‘The heavens declare the glory of God; the skies proclaim the work of His hands’ (Psalm 19:1).

Why did God wait till Day 4 before He made the sun, moon and stars?

to print the picture for colouring in.

Make your own water to drink

What you will need:

ANSWERS: Perhaps because God knew that some people would worship the sun, moon and stars, and He wanted to show us that they are not so important after all. The sun did not form the earth, and the stars do not control what happens on Earth. God wants us to worship Him, not anything that He has created. Some people use the stars to make horoscopes. These are charts that supposedly say what is going to happen to people from day to day. God forbids this. He wants us to read His Word, the Bible, and to ask Him for wisdom; not to consult horoscopes, which people make up out of their own imagination. Return to text
Facebook Twitter Pinterest Reddit LinkedIn Gmail Email App Print