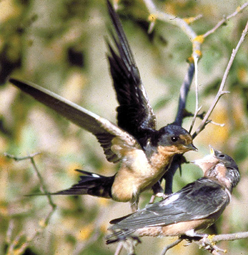 The newspaper heading boldly crowed: ‘A case of dramatic evolution’. The article, by New York Times columnist Carl Zimmer,1 concerned what he said was ‘one of the biggest evolutionary shifts ever documented in a living population of wild animals.’

So what caused all the flap? The Journal of Evolutionary Biology was about to publish some 20 years of research by European scientists on barn swallows. The males have two outer feathers on their tail, and these had become gradually longer, by 10%—about 11 mm (½ inch)—on average. The length of the central tail feathers had not changed in those two decades.

The researchers say that evidence suggests that female swallows are attracted by the display of the outer tail feathers, not the others. So this may be a case of sexual selection . If females prefer males with more of the genes for longer outer tail feathers, then those genes will have a greater chance of predominating in the population. So, on average, tails will become longer over time.

However, that will normally only be the case if there are already long–tail–feather genes in a population—sexual selection, like natural selection, can select only from what is already there.2 The same principle is illustrated for fur length in dogs.3 And it will soon reach a limit, as selection of any sort always does—see the box ‘Sweet limits’.

We have pointed out over and over that natural selection (an obvious fact that was first described by creationist Edward Blyth4) creates nothing new; it just ‘chooses’ from whatever is already on offer).5,6 Those genes which don’t survive to the next generation (whether from the death of the unfit in classic natural selection or from being rejected by ‘breeder’s choice’ in artificial selection, or ignored by ‘mate choice’ in sexual selection) are effectively being culled.

That is, selection can get rid of genetic information, but it can’t create any. And since goo–to–you evolution requires a massive net increase of information over time, that means that simply watching selection in action does not demonstrate ‘evolution’ in action, no matter how much evolutionists may attempt to ‘beat up’ the story.

It would be more impressive for evolutionary storytelling if it could be shown in this case that mutations (inherited mistakes, ultimately the only possible source for new information in the evolutionist’s toolbox) had introduced new genetic information coding for longer feathers. But mutations are virtually always downhill, i.e. a loss of information, including the rare beneficial mutations.7 And there is no suggestion in this research of mutations being involved at all, nor is there any reason to think that anything other than simple selection from existing genes is involved.

Interestingly, the Zimmer article makes reference to similar observations (which we have written about8) concerning changing beak lengths of Galápagos finches under the selection pressure of varying rainfall. That got evolutionists excited, too, but in that case also there was no evidence of mutations or any other source of new information. And, not surprisingly, when the rainfall changed back to its previous pattern, the beak lengths shifted back again, too. Such shifting back and forth around a mean under selection pressure is to be expected from simple genetics. But, like the swallow tale, it is hardly anything to get excited about in terms of demonstrating how microbes allegedly turned into microbiologists.

From where we stand, the faster the changes, the better.

In fact, if anything, it is creationists who should be excited about the speed of such changes. In the Creation/Fall/Flood/Dispersion model of Earth history, some very substantial changes within the created kinds have happened in what, to evolutionists, is an ultra–short time. The various beak lengths on the Galápagos have indeed come from a single ancestral population, as Darwin envisaged (but not the old–earth Bible–compromisers of Darwin’s day, who believed God had created all species in their current spot, ignoring the Flood). Selection would have had a great deal to do with this sort of adaptive radiation, and also the diversification of many of the kinds on the Ark into a greater number of descendant species. Only it would have had to happen in centuries, not tens of thousands of years.

So despite evolutionists (who are in any case often ignorant of what informed creationists are claiming) wanting to rub our noses in this ‘tale of two feathers’, the shoe is on the other foot. It is, as always, delightful whenever evolutionists report changes under selection happening over a timeframe which, to them, is surprisingly rapid.9 Keep the observations coming, guys. From where we stand, the faster the changes, the better.

After Darwin’s Origin of Species was published, sugar beet farmers in France started to enthusiastically apply selection to increase the sugar content of their crop. But once all the ‘high–sugar’ genes had been selected into one line (leaving out others in the process) the sugar content reached a limit which has not been surpassed since. All selection tends to similarly reach a limit, because gene pools only have a certain amount of information for any particular trait. And no creative evolutionary process exists to overcome that limit by adding true novelty (see main text). It is conceivable that mutational damage might cause loss of a control gene, thus transcending the limit for, say, sugar production, but that, too, would be a loss of information. So it would not be the sort of process needed to demonstrate how microbes are supposed to have turned into microbiologists.