The attraction of this spiky reptile lies in an idea!

A handful of remote little islands lie in Cook Strait just off New Zealand’s shores. The most obvious inhabitants are birds, circling and calling. These include the common diving petrel, about the size of a pigeon, and the larger sooty shearwaters. The chop, chop of a helicopter, or the chug, chug of an approaching boat, signal that humans are about to invade this natural haven. 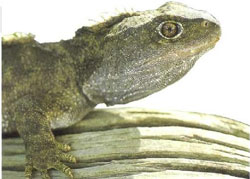 Tuataras have been known to science since 1831. They were not considered remarkable until Dr. Gunter from the British Museum realized that the skeleton was like fossil reptiles found in Africa, Asia, Europe, and the Americas.

A number of individuals intent on criminal acts have come by stealth in recent years. Their objective is the tuatara, a spiny-backed reptile which lives in the wild only on these islands. Although the tuatara is strictly protected by law, New Zealand’s wildlife service estimates that dozens of them have been smuggled out of the country. Their sale on the international black market brings close to $10,000 each, the profits of which pay for illegal narcotics.

At first glance it is hard to understand why tuataras should command so high a price. They are neither more physically attractive nor more talented than other reptiles. Rather, their attraction lies in an idea. They are said to be ‘living fossils’ whose ancestors reached their heyday before the vast majority of dinosaurs stalked the earth. In their supposed ancient past lies their mystique.

The name tuatara, meaning spine-bearer, is from the language of the original people of New Zealand, the Maori. It is the crest of movable, horny plates along the creature’s neck and back to which the Maori name refers. These animals look like chunky lizards, and are powerfully built. The skull inside the large head is extremely solidly built, with additional bone bridges not found in other living reptiles. The snout is rather long and teeth line the powerful jaws. Both sets of legs are strongly built too. The partially webbed feet have five toes, each with a sharp claw. These brownish or greenish animals are at most about 90 centimetres long (30 inches), and weigh about a kilogram (two pounds).

A characteristic which tuataras share with lizards is an eye on the top of their heads. This third or pineal eye however is better developed in the tuataras than in other living creatures. It is visible in young animals as a translucent scale, but as they age it becomes covered with normal skin. Underneath lie a lens, a retina and a nerve which passes through a hole in the top of the skull to the brain. As the structure lacks an iris it may simply be sensitive to light, for these animals are for the most part nocturnal, or active at night. Also, like lizards, the tuatara is able to grow a new tail should the old one become detached.

In their life-style the tuataras seem to follow the motto: ‘Long and slow is the way to go!’ Associated with the lowest temperature requirement of any reptile are low metabolic processes in the tuatara and a slow growth rate. These animals do best at about 12 degrees Celsius, while most reptiles reach peak performance between 25 and 38 degrees Celsius. They do not become sexually mature until they are 20 or more years old and they may live to be 100 years or older. Mating takes place in January, but the female does not get around to laying her eggs until October to December. In a shallow nest she then lays between five and 15 eggs with parchment shells. These are covered with soil and forgotten. Not until 13–15 months have passed do the eggs hatch. This is the longest period of embryonic development known in reptiles and it includes one winter season.

Tuataras have been known to science since 1831, but at first they were not considered to be anything more remarkable than a new species of lizard. In 1867, however, Dr. Albert Gunter of the British Museum realized that the structure of the skeleton, including specifically the skull and the spinal cord and ribs, was like that of fossil reptiles found in Africa, Asia, Europe and North and South America. These rhynchocephalians, or beak-heads, are found in great variety in Jurassic rock. Conventional chronology has it that the beak-heads flourished early during the Age of Reptiles, long before the great dinosaurs appeared. Fossil skeletons found in Europe in deposits said to range in age from 150 million years down to 135 million years are very similar to those of the living tuataras. In rock laid down more recently, on top of the lower Cretaceous layers, no trace of such specimens has been found.

Herein we see a conundrum. How is it that the tuatara, an animal with poor competitive abilities, was able to survive so long while more aggressive animals like the dinosaurs died off? It was the tuataras’ difficulties in competing with mammals like rats, for example, that ended in the elimination of the tuatara from the larger New Zealand islands. This was after the introduction of Europeans and their animals in the nineteenth century. A small population of so unaggressive an animal might survive several thousand years, but the idea that it could survive millions of years after all similar creatures had died out seems unreasonable.

There is no question that the living tuatara and the fossil specimens from Europe are very similar. But does an interval of 135 million years really separate the two groups? According to current evolutionary theory, a population like the tuatara would be unlikely to have remained unchanged for so long because small populations under stress are supposed to undergo the most rapid change. The high degree of similarity therefore would suggest a short time interval.

Logically too, one must recognize that individuals from a population which extends to the present could have been fossilized at any time up to the recent past. So why are no fossils of tuataras found in the many layers supposedly ranging from 135 million years ago down to the present? Living fossils like the tuatara therefore call the conventional geological chronology into question. Those buying tuataras on the black market may want their money back! The supposed antiquity of the tuatara pedigree is without foundation.