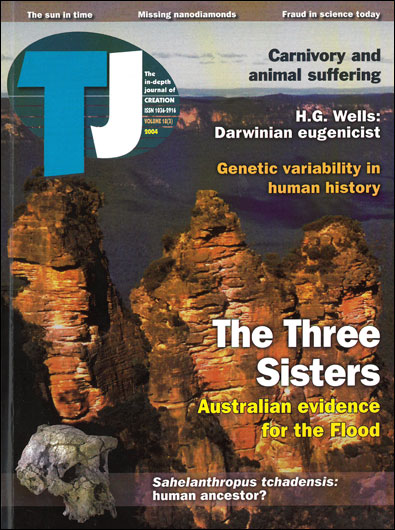 The rhetoric of design

The Intelligent Design (ID) movement is a new factor in the origins debate. Woodward, an expert in rhetorical analysis, offers readers an insightful work tracing both the history of ID as well as the rhetoric that ID is founded upon. His support for ID as a Christian is balanced by the fact that this book is derived from his doctoral thesis at a secular school, subject to critical review. Doubts About Darwin (DAD) is well written and scholarly, without becoming encumbered with technical jargon or asides that detract from the main themes. Extensive footnotes are available at the end of the 303-page book for those interested in all the details, as well as a bibliography and index.

Woodward’s extensive research shows clearly as he paints a rich portrait of each leader in the ID movement: how they became leaders, their activities in conferences and lectures, debates and encounters with Darwinian leaders. DAD does not go deeply into the merit of the arguments pro- or con-ID, but offers insightful analysis of the rhetorical tactics of ID and its Darwinian opposition. ‘Creation science’ is occasionally mentioned (though never in any detail), usually when emphasizing how ID is distinct from it. It is clear from this book that the ID movement did not spring from biblical faith, nor does it have an interest in specifically supporting it. Although some biblical creationists (such as Dean Kenyon) do work within the ID umbrella, this is neglected in DAD. Readers will get the impression that we are definitely outsiders, presumably with nothing to contribute to ID or science generally.

The rise of Intelligent Design

Woodward traces the birth of the ID movement back to the agnostic Michael Denton and his work Evolution: A Theory in Crisis, published two decades ago. He deftly explores the skepticism of pioneer secular antievolutionists such as the mathematicians of the Wistar Symposium in 1967 and Pièrre Grassé’s strong critiques of Darwinism in the 1970s, setting the stage for Denton’s iconoclastic polemic. Denton’s Evolution, according to Woodward’s research and interviews, was instrumental in converting or motivating virtually all subsequent ID leaders.

Woodward leads us next to Phillip Johnson, whose side-by-side reading of Denton’s Evolution versus Richard Dawkins’ The Blind Watchmaker jolted him awake to the naturalistic dogmatism of evolutionism as well as the weaknesses of monophyletic evolution as a scientific theory. Johnson went on to become the informal leader of the ID movement, with his famous books combating the metaphysical naturalism of evolution, beginning with Darwin on Trial. In contrast to Denton’s expert scientific attacks on the plausibility of evolutionary explanations as matched against eloquent descriptions of the complexity of life, law professor Johnson focuses his attacks on the naturalistic philosophy, reasoning and rhetoric that undergirds evolutionary dogma.

Johnson’s activities within academic circles, combined with his friendly demeanor and aggressive ‘wedge’ strategy, soon led to the recruitment of scores of new scholars within ID ranks. Woodward introduces us to Michael Behe, the Catholic biochemist who would take the next turn at debunking Darwinism in Darwin’s Black Box (1996), this time from the perspective of molecular biology. Behe exposed the fact that Darwinists did not even have attempted explanations for the origin of biochemical systems because of the complexity of such systems. He also introduced the concept of irreducible complexity, which recognizes that many systems contain a minimum number of components that are required for basic functionality. Darwinism cannot gradually evolve such systems; they must go from nothing to the irreducibly complex level at once. Neo-Darwinism has no mechanism to explain such highly specific, macroscopic jumps in functional complexity; nor have any been observed.

Woodward then turns to the ranks of the new recruits, young scholars who came to dominate the rhetorical landscape after 1996. He mentions four in particular (Jonathan Wells, William Dembski, Stephen Meyer and Paul Nelson), with particular emphasis on Wells and Dembski. Developmental biologist Jonathan Wells’ book Icons of Evolution (2000) continued the battering of Darwinism, this time exposing the chronically fraudulent, distorted and exaggerated nature of textbook ‘evidence’ for evolution as taught to school children.

Central standing is given to William Dembski, whose works such as The Design Inference and No Free Lunch position him as the key philosopher of ID. Dembski’s foundational contribution has been to flesh out, in highly specific logical and mathematical terminology, the method by which we intuitively recognize design. The effort has implications from criminal forensics to archaeology (indeed, origins received hardly a mention in The Design Inference), but the implications for origins research are what has made it so explosively controversial, and so powerful a tool for the ID camp.

Dembski recognized that all events can be traced to causes of three types: chance, order (the product of natural law), or an intelligent agent. Explanations should appeal first to chance, second to natural order, and to design only when the first two possibilities have been ruled out. A seemingly random scattering of marbles is best explained by chance; the fact that they all lie on a flat plane—the floor of a room—is explained by the order produced by gravity; the fact that the blue marbles among the variously coloured marbles spell out ‘HELLO’ cannot be explained well by chance or natural order, and thus is evidence of an intelligent agent even if it was not observed in action.

Woodward closes on an upbeat note; scholars are turning to ID in increasing numbers within academia. Denton has taught people the hypertechnological nature of life; Johnson has poked holes in the notion that Darwinism is a ‘requirement’ for doing science; Behe has introduced everyone to the irreducible complexity of biochemical systems; Wells has exposed the hypocrisy and deceit of Darwinian apologetics; Dembski has taught us how to do science within an ID worldview. The Darwinian opposition is trenchant, but unable to mount many effective counterattacks with either rhetoric or science. He emphasizes how their key argument seems to be repeating the line that ID is really just ‘creation science’ in disguise. Just how the biblical creation position has been refuted is never explored. DAD leaves it in the intellectual ghetto in which naturalistic rhetoric has pigeonholed it.

Several valuable appendices close out the book, including Phillip Johnson’s personal notes of his first academic skirmish with Darwinism and an essay on rhetoric and science that flirts with postmodernism before anchoring science in reality. There are many possibilities in science, but also many explanations that are not possible in the light of experimental research, and this is what distinguishes the rhetoric of (real) science from other realms of expression.

Despite his extensive interest in all things ID, Woodward appears to have carefully avoided any possible role for biblical creationism in his work. This is disappointing because it would be fascinating to see his talents at rhetorical analysis applied to strategic creationist books.

The weaknesses of the ID position do appear occasionally in DAD. On p. 141 a brilliant tactical manoeuvre by Darwinists is described. Woodward quotes David Hull’s famous description of pain and suffering in nature, and Hull’s astonishment that anyone would care to attribute such things to God, or worship a deity responsible for such atrocities. Woodward, in response, weakly states that there is ‘a rich flow of ongoing discussion’ regarding how to reconcile suffering and evil with God in the theistic camp, which is a nonanswer. The biblical answer, that God did create a world perfect and without suffering, one that has fallen under a Curse and suffers as a result of our sin and rebellion, cannot be given by the ID camp. It would immediately give rise to catcalls of ‘so it’s based on religion after all’ in the Darwinian camp. This topic can be exploited by creationary apologists to reach converts to ID with the truth of the Bible.

Such efforts are still needed. Thanks to the ID movement, the origins battlefield is no longer a David-versus-Goliath battle of biblical creationists versus Darwinists, a guerrilla insurgency versus an entrenched regular army. Advocates of Design now field a regular army of their own, still very much smaller than the Darwinian opposition, but with high morale, growing numbers, and strategies the Darwinists are only now catching up to. But reading Doubts About Darwin makes it clear that the ID ‘army’ is not fighting on behalf of biblical creation, and its victory in academia will not lead to a scientific worldview based on Scripture. Whether or not that battle (or minor skirmishes within the overall war) will be won remains to be seen, but either way, the war to win hearts, minds and souls to Christ will continue. As has been pointed out before,1 people can be ID enthusiasts (or ID converts) while believing in New-Ageism, creation by aliens, or even being Moonies (like Jonathan Wells). Michael Denton himself has, while in the thick of ID, moved ever further away from a biblical position in his own thinking and writing.

While we can take some comfort from the fact that the ID movement is at least engaging the opposition and keeping them under pressure, we should not become complacent, presuming that somehow the ID movement will ‘do our work for us’. We need to always strive for the sake of the Gospel to embed the Christian understanding of nature in the minds of all men.