The sticker didn’t stick (or did it?)

A school board in Cobb County, Georgia, USA, has decided to appeal a federal judge’s ruling that its evolution disclaimer sticker must be removed from science textbooks

As previously reported, US District Judge Clarence Cooper handed down (last week) the much-anticipated ruling in the case of Selman v. Cobb County School District, in which parents challenged a school board decision to place evolution disclaimer stickers in the front cover of some high-school biology textbooks in Cobb County, Georgia, USA. 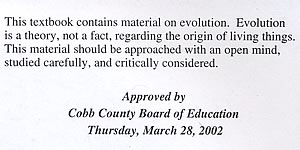 Contained within the judge’s 44-page ruling was the answer to the question everyone in the Atlanta area seemed to ask: “Would the sticker stick?” Did this 33-word disclaimer, which cautioned students about evolution, violate the US Constitution by “establishing religion”?

Yes, the stickers are an unconstitutional endorsement of religion, said Judge Cooper in his ruling. Therefore, the stickers must be removed from the textbooks.

In an Associated Press article (January 13) that was immediately picked up by dozens of news outlets from South Africa to South Dakota, Judge Cooper explained his decision in the following statement:

By denigrating evolution, the school board appears to be endorsing the well-known prevailing alternative theory, creationism or variations thereof, even though the sticker does not specifically reference any alternative theories [emphasis added].1

That was last week. This week, it’s a different story. On January 17, the school board decided to appeal Judge Cooper’s decision, choosing to take the case to the 11th U.S. Circuit Court of Appeals in Atlanta. School board attorney Glenn Brock said he will request a delay in complying with the judge’s order to remove the stickers.2

In a statement to the Atlanta Journal-Constitution (January 18), the board said it felt “condemned … for taking a reasonable approach to address the concerns of [Cobb County] citizens on a controversial issue.”2

As a result of the court’s bizarre ruling (which included a comment that expressed concern about not wanting to upset those who hold evolutionary beliefs), the sticker, which features the following words, must be removed from the Cobb County high school biology textbooks:

This textbook contains material on evolution. Evolution is a theory, not a fact, regarding the origin of living things. This material should be approached with an open mind, studied carefully and critically considered.

Judge Cooper ruled that the stickers went against the First Amendment because they “convey a message of endorsement of religion.”3 Jeffrey Selman, a parent of a Cobb County student, filed the suit (along with the American Civil Liberties Union) against the school board. (On the other hand, it should be noted that some 2,300 parents had petitioned in favor of the stickers as a way to help counter the nearly $8 million worth of new curricula that pushed Darwinism unchallenged). Mr Selman told the Toronto Star that he “was not prepared to live in a theocracy where the views of a militant minority are foisted on everyone.”

Mr Selman went on to say, “I was terrified about the future of the country I have to live in and my child has to live in. From the Bush White House to the evangelicals on the school board, they were taking away our freedoms.”

Michael Manely, the lawyer representing the parents who were against the stickers, told the Toronto Star, “This is a great day in history and a great day for freedom in our nation.” He added that Cobb County students will now “be permitted to learn science unadulterated by religious dogma.”

But was the judge’s decision really a setback for those who support open discussion of evolution and alternative explanations? One might think so based on some of the headlines from newspapers across the world (even a newspaper in the United Arab Emirates is reporting on this court case).

Dr John Morris, president of the Institute for Creation Research, refuses to see this as a setback, telling the Toronto Star that this case reveals that “evolutionists are just very insecure.” “That sticker did not teach creation or the biblical view of things. It just encouraged students to know that this is not an open-and-shut case,” Morris said.

Ken Ham commented: “This ruling by Judge Cooper is absolutely preposterous. Here you have a sticker that doesn’t mention God, prayer, the Bible, creation … and it’s considered religious because the people behind it believe in God.”

Ham added: “So, even when you leave God out, leave creation out, and just have a sticker that talks about evolution, a judge considers that to be religious because the people that came up with it have a religious belief. Do you see the inconsistency here?”

Determining whether the sticker violated the Establishment Clause of the First Amendment presented Judge Cooper with many things to consider. First, Judge Cooper ruled back on 31 March 2004, that the sticker passed the first prong of the Lemon test, a method used to analyze whether an act of government is constitutional by meeting three criteria [actually a convoluted invention by the activist judge Sandra Day O’Connor, instead of the clear language of the Constitution itself: "establish" which was clearly in the context of forbidding an “established” church or “Church of America” like the Church of England, not excluding Christianity from the public square—CMI]: 1) the act has a primarily secular purpose; 2) the primary effect of the act does not promote religion over nonreligion, or promote one religion over another or somehow serve as a government endorsement of religion; and 3) the act does not result in an excessive entanglement between church and state—last week’s ruling pertained to only the last two prongs of the Lemon test4.

Yet the stickers were found to be unconstitutional despite the judge’s ruling that they are also “fostering critical thinking” about evolution and serve “a clearly secular purpose” (with the judge agreeing that the Cobb County school district had secular, not religious, reasons for adopting the sticker). Some observers thus see this decision as another example of an “activist judge” who is grossly misinterpreting the “establishment-of-religion” clause in the Constitution.

Mr. Seth Cooper, an attorney and legal analyst with the Discovery Institute, an Intelligent Design think tank, faulted the lead counsel for the school district, Linwood Gunn, for putting up “an incompetent defense.”5 During the November 2004 trial, the Institute issued a statement noting that Gunn decided not to have any scientists serve as rebuttal witnesses, despite the fact that dozens of Georgia scientists had submitted a “friend of the court” brief defending the district.5 (On a related note, in a brief submitted to the court last spring, the ACLU made the false claim that there are no scientists who dispute evolution and that those who dispute evolution do so only for religious purposes.4)

“A vigorous defense of the sticker’s constitutionality would have focused upon the growing number of scientists who have raised scientific criticisms of aspects of neo-Darwinian and chemical evolutionary theories,” said Cooper.5

Ham agreed, asking the question, “Is evolution so weak that it has to be legislated in order to protect it?”

Ham said he believes the battle in the public schools ultimately comes down to a spiritual and emotional issue, where there is no such thing as neutrality.

He explained, “When the public school says you have to teach every aspect of reality without any acknowledgement of God or the Bible, you’re saying that God has nothing to do with reality. This is not a neutral position towards religion. It’s actually a religious position that says that everything can be explained without God.”

Ham concluded with the general observation that the Bible tells us there is no such thing as being neutral. (See Secular creation?) Luke 11:23 says a person is either for Christ or against Him. Thus the battle in America’s public schools is really a clash of worldviews—one explains life with God; and one, without God.

We will keep you posted on the progress of the appeal of the judge’s decision.

[Ed. note: Having initially attempted to appeal against the judge’s decision, the school board decided to drop the matter. Board chairwoman Teresa Plenge said, “We faced the distraction and expense of starting all over with more legal actions and another trial.” The decision not to pursue the case, however, was not without cost. The school district paid out $166,659 towards the plaintiff’s legal fees and agreed not to place “any stickers, labels, stamps, inscriptions or other warnings or disclaimers bearing language substantially similar to that used on the sticker that is the subject of this action.” In return, the plaintiffs agreed to cease all actions against school district. Reference: Hall, R., School board abandons evolution textbook stickers; http://www.crosswalk.com/1458932]