White deer certainly ‘stick out like a sore thumb’, as the saying goes. Being so glaringly obvious against the green and brown backdrop of their forest habitat, you might think they’d have a huge disadvantage compared to normal reddish brown deer when it comes to eluding predators such as coyotes and bobcats.

Yet sightings of white deer abound. Across the natural range of this American deer species, Odocoileus virginianus (colloquially known as Virginia deer or white-tailed deer), they’ve been seen many times by hunters,1 photographers,2 and motorists.3

Some people have reported their excitement at unexpectedly encountering ‘albino’ deer, which they were able to capture on camera—only to be disappointed when friends pointed out that the photographs showed the deer did not have pink eyes, therefore could not have been albino.2,4

Against a snowy background, it’s the mutant white Bambi that has the camouflage advantage over its coloured relatives.

But this highlights the problem of the disputed meaning of ‘albino’. This is the source of much confusion and, as we shall see, has ramifications for the debate over management of deer populations throughout many American states. The terms relating to albinism are often not used consistently and, exacerbating the problem, have been subject to revision as new information about genetics has come to light.

‘True albino’ or ‘pure albino’ as some have referred to them, are white deer with a genetic defect, a mutation in any one of several key genes, resulting in the total absence of the pigment melanin in the deer’s body. This complete disruption of the ability of cells to make melanin means these deer have not only white fur but also translucent skin, colourless hooves and pink eyes—pink because the blood vessels behind the lenses show through the unpigmented irises. Given the important role that melanin plays in eyesight, it’s hardly surprising that these pink-eyed deer often suffer from poor vision. These ‘pure albino’ deer are also prone to other physical abnormalities, such as short legs, curved spines and malformed internal organs.

The recognized degradation of the deer genome is in the opposite direction (i.e. downhill) to what’s needed for primordial sludge to have turned into deer

There are some geneticists who have stated that white deer that do not have pink eyes still qualify as being albino—though some people might colloquially refer to them as ‘partial albino’ or ‘leucistic’.2,4 The genetic mutations associated with these forms of albinism also disrupt melanin production in skin and hair, but less so in hooves and eyes. Thus the irises of these albinos may range from light blue or grey through to dark. Apart from their white fur, these deer have been reported by observers to show no difference in behaviour and are just as healthy as normal coloured members of the herd, with white deer mingling with brown deer without evidence of ostracism or any tendency towards submissive (or, for that matter, dominant) behaviour beyond normal levels.

The birth rate of ‘pure albino’ deer is estimated to be somewhere between one in 10,000 and one in 100,000.5,6 Little wonder then, in tandem with its poor eyesight and physical abnormalities rendering them less likely to reach maturity, that they are rarely seen. In contrast, darker-eyed white deer are commonly sighted—with some areas in the US becoming renowned as places to find them. Why should this be, given that one might expect that their white coat would make them far more easily seen, and presumably targeted, by predators and hunters?7

One of the areas in the USA that has become famous for its white deer is in northern Wisconsin.2,8,9 While in summer the all-white members of the deer herd cannot camouflage themselves like their brown counterparts, it’s a very different story in winter. Against a snowy background, it’s the mutant white Bambi that has the camouflage advantage over its coloured relatives. So, with snow on the ground for nearly half the year, it’s been suggested that this might be a significant factor in explaining the survival of the white deer in that location. For seven months of the year, against a spring-summer-fall backdrop of green and brown vegetation, natural selection would be expected to favour the coloured deer. But with the arrival of the winter snow, natural selection would likely favour the mutant whites. Being harder to see, their natural predators have greater difficulty detecting them.

But there’s another factor at work too. Wisconsin is one of a number of US states that have laws that effectively protect white deer from human hunters.

Many Native American tribes regarded albino deer as “sacred harbingers of good fortune”, and so did not kill them.10

That mystical reverence for white deer is not that far removed from the feelings of many in the American general public today—with some affectionately referring to them as “Ghosts of the Forest”. As even one hunting enthusiast explained, “albinos are a pretty darn special sight. The people of Wisconsin think they’re so special that you can get into big trouble for shooting one.”11 In Wisconsin, the ‘big trouble’ is presently limited to monetary fines and loss of hunting privileges.12 But in other states where shooting albino deer is illegal, such as Illinois, the penalty could include jail time.13 Clearly, shooting albino deer can cost hunters dearly.

Even in states where albino deer are not protected by law, such is the public outcry when one of these ‘amazing’, ‘awesome’ and even ‘magical’ animals is shot that many hunters have concluded it’s prudent to simply avoid shooting albino deer at all. And that prudence extends not just to ‘true albinos’ but to all white deer.

Actually, that effect is even stronger in states that protect albino deer by law. E.g. in Tennessee. Although it’s legal to kill ‘white non-albinos’, Tennessee conservation officials recommend that the safest way for hunters to not inadvertently violate albino protection laws is to refrain from killing any white deer—even piebald deer: “If you aren’t sure, you shouldn’t pull the trigger. Sometimes it’s hard to tell the difference, and it’s not worth making a mistake.”14 The state of Iowa evidently recognizes this, because its laws prohibit the shooting of any deer that’s 50 percent or more white.1,15

All of this helps to explain why white deer are able to survive ‘against the odds’. Note that we have no problem with the invoking of natural selection as an actual force that operates upon deer populations.16 But the white deer story provides no support for the idea that the life forms familiar to us today have evolved from some presumed simpler form in the past. Agents of natural selection such as coyotes or weekend shooters can indeed affect the proportions of white versus normal-coloured deer in the herd (see box), and in some circumstances might even act so strongly as to completely remove white or brown individuals entirely. But such would represent a loss of genetic information from the herd, not a gain. Natural selection is not evolution!

And, as we have already noted, the white fur of these deer results from one or more mutations, genetic defects. That’s one reason why some are arguing against state laws protecting albino deer, instead advocating that these “biologically inferior … mutant” animals ought to be culled in order to try to maintain the genetic strength of the herd. This recognized degradation of the deer genome is in the opposite direction (i.e. downhill) to what’s needed for primordial sludge to have turned into deer (as claimed by evolutionists). But this reality of increasing genetic decay is right in line with the whole originally “very good” creation now being “in bondage to decay”—just as the Bible says.17 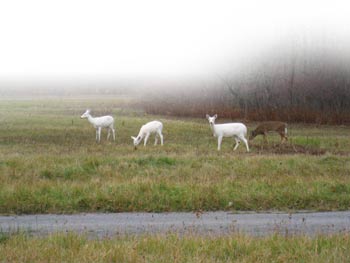 What has been described as “the world’s largest herd of white deer” resides inside the grounds of the former Seneca Army Depot in New York state. The Chairman of Seneca White Deer Inc., a non-profit organization committed to preserving the herd, said, “The pure white deer of the Depot are unique in that they number approximately 250 animals. Nowhere else on this planet do white deer occur in these numbers.”1

How did they get there? It’s thought that when the fence was built to surround the 10,000-acre Seneca Army Depot in 1941, several dozen normal-coloured deer were inside. Thus isolated from predators, the Depot’s deer population quickly grew. It was in 1949 that the first white deer, a buck and a fawn, were seen. They had dark, not pink, eyes (as do all the Seneca white deer today). After that first sighting, the numbers of white deer gradually increased.

By the mid-1950s, the total population of deer within the fence had so expanded that the Army allowed hunting to reduce the size of the herd and prevent starvation. However, the Depot Commander at the time gave strict orders that shooters must target only the brown deer—the white deer must not be killed. And so the proportion of white deer in the herd steadily grew, up to about 30% of the total herd of 800 today.2

If the former Seneca Army Depot land remains a haven for the white deer, and the maximum herd size is maintained at about 800, then there could come a point where the herd becomes exclusively white. At that point, the genes for brown-coloured deer will be lost from the herd. This would parallel the influence of selective shooting of bighorn sheep at Canada’s Ram Mountain, leaving hunters today with the option of disappointingly small horn trophies only.3 Similarly with the selective harvesting of just the large cod from the Arctic fishery. Nearly two decades after being closed to commercial fishing, it still hasn’t bounced back—the genes for large size are apparently gone.4