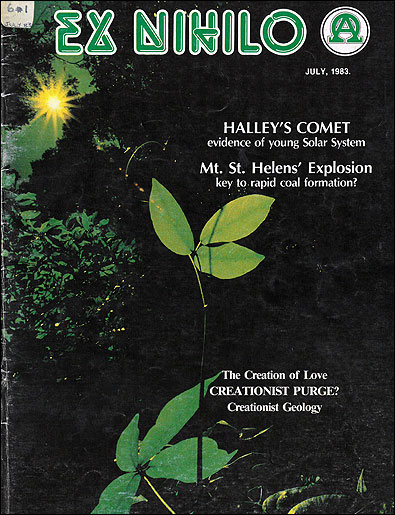 Today we often see vigorous attempts in the media and in the church to persuade people to accept evolution. The irony of this is that the attempt appears to be succeeding just as signs emerge that the theory of evolution is about to be replaced.

IT would be foolish to predict that evolution will go, since the history of science is full of examples of theories which have remained popular long after the evidence against them was well known. But the history of science also shows how quickly a theory can fall and that such falls are often preceded by a public highlighting of what the theory can’t explain. For evolution theory, this is happening right now.

Gaps in the fossil record are being discussed on T.V. Many prominent evolutionists have accepted that they do exist. The outspoken Professor of Geology at Harvard University, Stephen Gould, has even called the extreme rarity of transitional forms "the trade secret of paleontology". Gould is not alone. There is an increasing number of proponents of similar views simply because the fossil record does not show gradual evolution. Instead, according to them, it shows catastrophe, sudden extinction and abrupt change. But if this is at last being publicly acknowledged, why have people so brazenly believed the opposite? Why have they believed in spite of the facts and not because of them?

Believing in progress, people ignored the possibility that animals already were adapted to their environments. If an animal already is adapted to its environment any deviant form will be less adapted and therefore will be removed by natural selection. Thus "natural selection" can cause evolution only if animals are not already adapted.

Further if an animal already is adapted to its environment, change in the environment is likely to lead to the extinction of that animal.

As long as the belief in progress reigned supreme people could not see this fallacy in the theory of evolution by natural selection.

Today things are different. We live in a world of endangered speciesâ€¹ecological disaster. Animals are not changing to cope with a changing environment; they’re not evolving. They’re becoming extinct. The media tells us that they are too specialized; they need our help to survive. Things such as this are making it harder for people to believe that evolution by slow improvement is what happens in real life.

We also live in an age of revolution, of wars, and rumours of wars, of famine and extinction. I do not think it is accidental that some of the proponents of the new catastrophic geology are also Marxists who believe history is a process of violent change. The way in which we see the present must influence how we see the past.

The prophets of doom tell us daily that man’s ‘progress’ now threatens to destroy us, that there will be military or ecological disaster on a global scale. It is not so popular now to believe openly in slow and inevitable human progress. Such influences also make it easier for people to believe that the history of the world also had its global catastrophies.

The historian of science, T. S. Kuhn, has pointed out that a new theory gains popularity by claiming to explain what the old theory could not explain. The newer theories of rapid evolution are seizing on the great embarrassment of the older theory of slow evolution, namely the gaps in the fossil record. Once it was said that evolution happened so slowly it could not be seen. Now it’s stated that it happened so fast in the past we’ve missed it. How did it happen in this new way? No one is quite sure. Is any new theory likely to be proposed?

IF we go back to the days before Charles Darwin we find that many popular and scholarly authors advocated evolution. However they did not have a convincing explanation of how it could occur. Darwin’s contribution was to give them a believable way for it to happen. But 120 years of research and the changing times have made Darwinian and neo- Darwinian views on evolution not so acceptable. Evolutionists are back in the same dilemma. They still believe in the theory; they just don’t know how it happened. How will they solve this problem? What will any new hypothesis look like?

I suggest we should look at the unorthodox literature of the day, even that on the so-called lunatic fringe. Many authors want to see the world‘s history as a series of revolutions and catastrophies. There are even people who believe that long ago the earth reached a high stage of civilization only to be wiped out by natural or man-made disaster. It would not be difficult to construct a new theory of evolution from this. Perhaps rapid changes occur after global disasters like nuclear war or collision with asteroids. Science Fiction? Already we have ‘respectable’ scientists such as Nobel prize winning atheist, Francis Crick, suggesting ‘genes from space’ as the origin of life on earth.

When or if such a new theory becomes popular, what will the Christian church do? After all, prominent church men and laity from all denominations are amongst the staunchest defenders of the present view of evolution. What will they do when science moves on to the next theory? Creationists often find that their most ardent opposition comes not from non-Christians but from church people who have made evolution an article of faith. People who claim to be Christians are the defenders of such a non-Christian idea as evolution. Why? Mostly because they want to appear intellectually respectable to their non-Christian peers. There is however probably one other reason.

We need to realise that the belief in human progress which has dominated the last 100 years and has had a great influence on evolutionary thinking, was partly Christian in origin. The history of the world does move toward a final goal. On the surface this had a similarity to belief in slow but sure human progress. But the progress idea is profoundly anti-Christian because God is not regarded as the cause of any movement to a goal in history.

Likewise if it does become popular to regard the history of the earth as just a series of catastrophies, this would merely be a return to old pagan views that history has no end, it just repeats itself. Some Christians will be attracted to this view of repeating catastrophies, because they have some sort of belief in one great disasterâ€¹Noah’s flood. They will undoubtedly jump on the bandwagon. When will Christians learn that they should not adopt theories, however popular, that are contrary to Scripture?

Whether the history of the earth is presented as a slow evolutionary progress or as a series of catastrophies, there are elements in both that will look vaguely familiar to those Christians who are vaguely familiar with Scripture. Yet both are quite contrary to Christian faith. They can be believed only if we ignore what the Bible says about how the world came into existence and what God has done with it since.