The behaviour of ants has long fascinated scientists. And why not? These insects have the strength to carry food up to seven times their own body weight, and set up amazingly complex colonies, with social ‘castes’ in which every member has a role.

In fact, ants are not only fascinating just to entomologists looking at them under the microscope. In recent years, computer scientists have been paying great attention to the way in which a colony of ants can solve complex problems; in particular, how it finds the shortest route to a food source.

Each insect in a colony seemed to have its own agenda, and yet the group as a whole appeared to be highly organized. This organization was not achieved under supervision, but through interaction among individuals. This was most apparent in the way in which ants travel to and from a food source.

The social behaviour of ants is among the most complex in the insect world.

Ants form and maintain a line to their food source by laying a trail of pheromone, i.e. a chemical to which other members of the same species are very sensitive. They deposit a certain amount of pheromone while walking, and each ant prefers to follow a direction rich in pheromone. This enables the ant colony to quickly find the shortest route. The first ants to return should normally be those on the shortest route, so this will be the first to be doubly marked by pheromone (once in each direction). Thus other ants will be more attracted to this route than to longer ones not yet doubly marked, which means it will become even more strongly marked with pheromone. 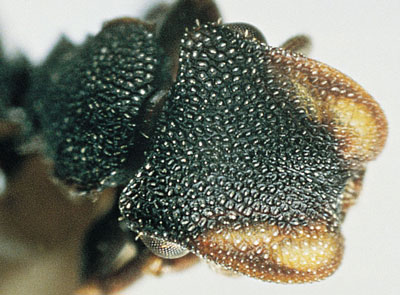 Ants—no evolution! The unusual-looking ant Zacryptocerus aztecus from Mexico is identical to its ancient counterpart found in Caribbean amber, supposedly 15-45 million years old. Think how many ant generations would pass in such vast time periods. There are hundreds of examples of such ‘living fossils’, highlighting the mythological nature of the notion of evolution and millions of years. 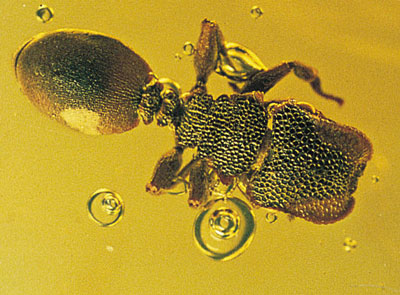 Soon, therefore, nearly all the ants will choose this route. But what if the ants happened to return from a longer route first, marking it most strongly? Computer simulations show that this problem is solved if the pheromone decays or evaporates slowly. This makes it harder to maintain stable pheromone trails on longer routes.

Studying this uncanny skill has enabled researchers to create software agents capable of solving complex IT problems, such as rerouting traffic in a busy communications network.1

The Saharan Desert Ant has an equally amazing way of finding its way back to its nest, involving complex mathematics called path integration and horizontal projection.2

There are about 8,000 species of ants in the insect family Formicidae (order Hymenoptera). They live all over the world, although they generally prefer warmer climates, and range in size from 2 mm to 25 mm (0.08-1 inch).

Ants live eight to ten weeks, passing through a four-stage life cycle—egg, larva, pupa and adult. The workers are sterile females and do the labour of the nest; the larger ones (the soldiers) defend the colony. At certain times of the year, many species produce winged males and queens. These fly into the air where they mate (with the male dying soon afterwards). The fertilized queen then establishes a new nest, and spends the rest of her life laying eggs.3

The social behaviour of ants is among the most complex in the insect world. They communicate by touch and smell, constantly touching each other to pass on their nest odour. There are also some fairly aggressive tendencies exhibited by many ants (which, fortunately for our children, recent animated films like Antz and A Bug’s Life did not emphasize).

Some ants can lift items up to seven times as heavy as themselves.

For example, ants have the ability to take over the nest of other ant species, via a ‘parasitic queen’ and ‘enslave’ the inhabitants. The queen will attack and kill the queen of the other species, and then cover herself with the odour of the other queen so she will be accepted by the colony residents. This is done by touching parts of her body to all the open wounds of the dead queen. She then lays her eggs, which are cared for by the colony ants. As the parasitic eggs hatch and the new queen’s ants become more abundant, they capture the larvae of the original colony and use them as slaves when they hatch. These ‘hostages’ grow up and must take care of the upkeep of the nest and its invaders.4 Not a pretty thought!5

Ants can mount a coordinated raid on an enemy colony.

All ants have amazing design features. They have two sets of jaws—the outer pair is used for carrying objects and for digging, while the inner pair is used for chewing. Some ants can lift food items (be they leaves, grains or other insects) that are up to seven times as heavy as themselves.

All ants play an important role in the economy of a fallen world. They control the population numbers of many other species. Ants can eat animals (vertebrates as well as other invertebrates like themselves), plants, and even the seeds of many plants, as well as eating and thus recycling dead organic material. Most ant species live in soil, but some, like carpenter ants, live in wood (although they don’t actually eat the timber).

Ants are proficient hunters and are relentless in their search for a nest, food, or even slaves. They are able to mount a coordinated raid on an enemy colony, and are quick to defend their nests against intruders.

Some ants have what is described as mutually beneficial, or ‘symbiotic’, relationships with other insects, and even, in some cases, with fungi (see aside below). One of the best examples of this mutualism occurs with aphids (’plant lice’). These sap-sucking insects produce a sweet, sticky substance known as honeydew, to which ants are highly attracted as a food source. 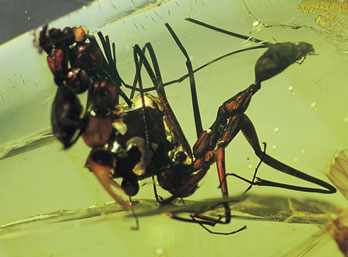 Ants have always been ants—and still are! Caribbean amber, said by evolutionists to be millions of years old, entombed this Honeypot Ant, Leptomyrmex, (photo at top). Yet the identical species (below) can be found living today (less than an hour’s drive, in fact, from Creation magazine’s office in Brisbane, Australia). Why no evolution in all that time? 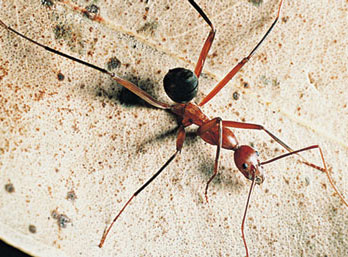 The way this relationship works can be seen in the Cornfield Ant and the Corn Root and Strawberry Aphids. Apparently to ensure they remain well supplied in honeydew, Cornfield Ants will foster these aphids, ward off any of their enemies and protect their eggs in winter. In the case of the Corn Root Aphid, Cornfield Ants will collect aphid eggs in the autumn (fall), protect them in their nests over winter, then in spring, carry the young to smartweed and grass roots, where they obtain nourishment. These young nymphs grow to become wingless females, called stem mothers, that can produce live young without mating. These stem mothers raise two or three generations on the host plant, after which the ants return to carry the aphids to young corn roots where the aphids breed another 10-20 generations.6

Under the care of the ants, the aphids thrive. The ants gain the aphid honeydew ‘excrement’; the aphids gain protectors who also act as ‘chauffeurs’. However, the ants, not the aphids, appear to control the relationship. This is demonstrated occasionally when a winged female aphid is hatched, and then tries to fly off to a different host plant, away from the ants. It is then that the ants show their authority by seizing the female and carrying her back into their nest.4

The ant’s highly complex social structure, life cycle, strength, navigational abilities and the intelligence to ‘farm’ aphids, are all said to be the result of evolution. Such a claim defies logic and plain common sense.

When do evolutionists say that ants evolved? Britannica acknowledges that there is disagreement among entomologists as to when members of the order Hymenoptera first appeared on this planet. Some believe it was 225 million years ago (allegedly the same time as the first butterflies, moths and flies); others believe it was more like 150 million.

Under the care of the ants, the aphids thrive.

Britannica states that many fossil ants are known from the Early Tertiary Period (allegedly 60 million years ago), at which time ‘males, females and workers were already clearly differentiated’. Some of these fossil ants—supposedly 60 million years old—have been assigned to ‘living genera’.7 In other words, fossil ants look so much like ants today, they are classified in the same genus! What this really means is that fossil ants were ants—no evolution has taken place.

A group of ants known as the Attini, (which include the Leaf-cutter Ants of southern USA) has developed a ‘mutualistic’ relationship with a fungus. The ants ‘farm’ the fungus, protecting it from other consumers, and so have on hand a ready food supply for the colony.

The queen sits in the fungus garden laying her eggs.