The Bible and interracial marriage

Even though the Bible makes it clear that all people are descended from Adam and Eve (so they must be very closely related),1 there are still misconceptions among some Christians surrounding ‘race’. Surprisingly, perhaps, this can include concerns about the idea of marriage between two believers from different so-called races.

But these concerns have no basis in either science or the Bible. Science has finally caught up with God’s Word in affirming how very closely related we all are at the genetic level. Evolutionary thinking has, historically, exacerbated racism dramatically. Darwin believed that some groups were less evolved toward humanity than others—with his own group, unsurprisingly, the most evolved. Darwin’s ally in Germany, Haeckel, even attacked the Bible for its antiracism.2

It’s not as if we can solve all society’s problems with race by simply decreeing, on the basis of our close relatedness, that there is no such thing as race. If that were so, then there would be no such thing as racism, or discrimination by race. Nor would there even be the question of ‘interracial marriage’. In short, the word ‘race’ still conveys everyday meaning; we recognize that some are more closely related to us (and hence look more similar to us) than others.

But what ‘group differences’ exist are trivial, as modern discoveries in human biology and genetics now confirm. Things such as skin, hair or eye colour involve no structures or functions unique to any group, just various amounts of the same stuff. All people have the same ‘sunscreen’ skin pigment melanin; those with more melanin, generally labelled ‘black’, are really more dark-brown. Those with less, called ‘white’, are really light brown—often pinkish, because of insufficient melanin to screen the redness of their small blood vessels. And there are many shades in between.

Unlike any other creation book you have ever read 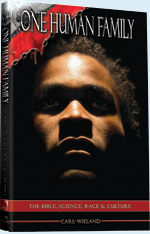 A blow-by-blow tour of race-related issues across the world, with amazingly apt anecdotes and analogies revealing a wealth of research and life experience all in one volume. Combines sensitivity with a rejection of ‘political correctness’. For many, this immensely readable work will make ‘the lights go on’—not just about race but the whole biblical ‘big picture’ of human history.

Dr Jerry Bergman wrote: “In short, it is superb!”

People with blue eyes have no unique colouring chemical; it’s that same stuff, melanin. It’s simply the way the light scatters from a lesser amount of melanin (just as the sky is blue because of the scattering of light from air molecules, enhanced by fine dust particles). Similarly, those genetically programmed to produce a lot of melanin in their hair will have brown or ‘black’ hair. And those with a little bit have blond hair.

Incidentally, it’s easy to explain how groups of people with differing characteristics distributed variously across the world could have arisen very rapidly. The Bible describes an event at Babel that provides the right conditions—the breakup of a population into a few dozen smaller ones that became isolated from each other.

The world’s population, having recently emerged from a ‘near-extinction event’,3 all spoke the same language. A small number of new languages (which form the ‘roots’ of today’s language family ‘trees’) was suddenly and supernaturally imposed upon this group.4

The resultant confusion and likely hostilities meant that each group rapidly fulfilled God’s stated purpose for this event, namely to spread people over all the earth. In effect, the event imposed a virtually instant social and then geographic (hence reproductive) isolation from each other. Each group carried a different subset of the total ‘gene pool’. Chapter 18 of The Creation Answers Book explains in detail how this would have led to the sorts of genetic groupings (including visible traits) we see in human populations today. Thus, racial differences, though not the purpose of this Babel event, were a side-effect.

Desperate attempts have been made to use this and other portions of the Bible to justify the status quo in societies with slavery and/or segregation. However, following that fairly drastic initial divine ‘nudge’, humanity has long ago amply observed God’s command to fill the earth. There is no suggestion in Scripture that God forbids either migration from one place to another, or marriage between one ethnic group and another.5

The Bible does counsel believers not to marry unbelievers (2 Corinthians 6:14). And in Old Testament times, the Israelites were not to marry outsiders. But they were allowed to if the outsiders converted to faith in the God of Abraham, Isaac and Jacob—such as occurred for Rahab and Ruth, ancestors of Jesus (Matthew 1). This shows that the issue was religious, not racial or even cultural.

Common sense indicates that groups that have a longer history of isolation from each other, both geographically and linguistically, will have developed greater differences in their respective cultures. Interracial marriage will therefore often mean that one is marrying someone from a different culture. So, there are ‘wisdom issues’ to consider. Cultural differences can arise even when two people are of the same ‘race’, e.g. a typical English person marrying a typical Russian. Even those speaking the same language, such as Americans and Australians,6 are often surprised at how great the cultural differences can be.

Cultural differences can greatly enrich both persons’ lives, but they can also bring a unique set of problems. Couples wise enough to seek counselling7 on various matters prior to betrothal should consider such things, too. It helps to be able to anticipate the sorts of problems that may arise, and bring the issues out into the open. The intention is to try to minimize problems should the marriage proceed.

Dogs and the dogma of ‘racial purity’

One of the issues in the way people see interracial marriage has, I think, to do with misconceptions about the idea of a so-called ‘pure race’. I recall listening once to a talk by CMI colleague, Peter Sparrow. With his trademark wide grin and booming voice, Peter made a statement which even startled me (it certainly seemed to shock many in the audience). He said (emphasis his): “Adam and Eve were the ultimate mongrels!”

When you think about it, he was absolutely right. The problem is that we have been conditioned to think of genetically depleted populations as ‘pure’ in the sense of somehow ‘better’. In fact, it is the ‘mongrel’ combinations in both animals and humans that have the greater genetic richness, more like the originals that God created directly.

When we start with the real history of mankind given in God’s Word, we see why there are no biblical or biological barriers to interracial marriage.

A good illustration of this involves domestic dog breeds. Starting from a ‘mongrel’ dog population, breeders have been able to select out many different ‘pure’ breeds—varieties as different as, say, Great Danes are from Chihuahuas. But by isolating certain characteristics, breeders have had to ignore others. Thus, by breeding for ‘Chihuahua-ness’ (including ‘tininess’), some of the genes for ‘Great-Dane-ness’ (such as ‘hugeness’) were lost in the process—and vice versa. So, if all dogs in the world ceased to exist apart from Chihuahuas, one could never breed something like a Great Dane again. To ‘rebreed’ a Great Dane, one would need the genetic richness and variety in that original mongrel population.8

So the ‘pure’ breeds are in fact thinned out and genetically depleted populations. They are more specialized, but also less able to vary and adapt further by selection. Similarly in human populations; Adam and Eve could not have been, as they are often depicted, pale-skinned with blue eyes and blond hair, or they could not have given rise to all of the different varieties of humans. They would likely have been ‘middle of the road’ in most characteristics, thus providing for the great range of variety observed in their offspring.

In such things as skin shade, hair and eye colouring, they were likely a medium brown. The descendants of people who have such a rich genetic endowment can then express a great range of variation as these genes recombine. Their skin shading can range from ‘white’ to ‘black’ and every shade in between.

This is beautifully illustrated in the ‘two-tone twins’ example (left) favoured by CMI speakers. The two beautiful twin9 baby girls shown were able to express that amazing level of variety in one generation because their mother and father (pictured) are themselves the product of ‘mixed’ marriages. In short, when two people from different races intermarry, they gain a greater richness and variety in their genes, closer to the original.

How sad that so many, inspired by evolution, or by others who have been, have put so much fanatical passion into preserving their particular ‘pure race’. Many have killed, and even willingly died, for this ‘cause’. Once one sees it for what it is—one’s genetically depleted race—it doesn’t sound like a cause worth wasting any breath on, let alone dying for.

When we start with the real history of mankind given in God’s Word, we see why there are no biblical or biological barriers to interracial marriage. In fact, there are positive aspects to it. Since the spouses in such a marriage are generally going to be less closely related than two of the same ethnic group, they are likely introducing greater genetic variety into their offspring.10