The ‘bloat and float’ ankylosaurs of Alberta1

A team of modern researchers wanted to test the widely-held idea that North American ankylosaur fossils are typically found upside-down. The idea stems in part from a 1970 comment by paleontologist Charles Sternberg (1885–1981) who after a lifetime of collecting dinosaur fossils in western Canada and the USA noted that “almost all” ankylosaur specimens he had collected were preserved upside-down.

The researchers re-investigated all known ankylosaur fossils from Cretaceous rocks of Alberta to determine their orientation. They examined field notes and field photographs, quizzed the original collectors, and examined fossils for sun-bleaching, erosion, and lichen growth, which tend to occur on exposed sides:

“Of the 36 ankylosaur specimens for which we were able to determine depositional orientation, 26 (70.3%) were upside-down. The remainder occurred right-side up, and a single skull … was preserved on its side.”

… carcass inversion resulted from bloating in aquatic settings prior to deposition—palaeobiologist J.C. Mallon and team.

So the idea was true. Now they wanted to determine why.

Over the years four different explanations had been suggested for upside-down ankylosaurs. Three they were able to dismiss:

Ankylosaurs were clumsy, and couldn’t right themselves if they somehow fell on their backs (a fate that sometimes befalls turtles). The researchers rejected this theory because the coastal plains of North America, where upside-down ankylosaurs occur most frequently, were relatively flat. Also, their fossils are prolific indicating they were able to survive very successfully.

Large carnivores flipped them over to attack and eat their soft underbelly. The researchers found no teeth marks, except on one skull, discrediting this theory.

The ‘armadillo roadkill’ theory, that on land ankylosaur carcasses would flip over due to bloating (no water required), just as allegedly occurs to dead armadillos, with their likewise armoured backs. The researchers investigated about 200 roadkill armadillo, including 22 fresh carcasses that they protected from scavenger interference, and found their orientations to be random. They observed that a few armadillo carcasses originally on their sides did roll onto their backs due to bloating, but they expressed skepticism that a 2-ton ankylosaur carcass would do the same.

That left just the ‘bloat and float’ theory, that in water dead ankylosaurs would flip over due to the heavy osteoderms on their backs and bloating tummy gases. To test this theory, they developed 3D models of a regular ankylosaur and a nodosaur (no tail-club) using carcass buoyancy equilibrium software previously used to successfully model the bouyancy (floating/sinking/orientation, etc.) of alligator, elephant, horse, giraffe, turtle, and penguin carcasses. The software model demonstrated that bloated ankylosaur carcasses were indeed likely to overturn in water.

“Of the four hypotheses that have been advanced to account for the frequency of upside-down ankylosaur occurrences, only one (the ‘bloat-and-float’ hypothesis) withstands experimental scrutiny. We therefore concur with previous assertions that carcass inversion resulted from bloating in aquatic settings prior to deposition.”

The researchers neglected to express the unavoidable further inference that deposition of the floating carcasses must have been quickly followed by deep burial, in order to avoid disarticulation and become fossilized.

All this is well explained by the biblical scenario of multitudes of animals drowning in the global Flood. Note, this does not mean that if an ankylosaur is found upright, that water was not also involved. The very fact that a carcass is so well preserved as a fossil is itself evidence of deep and rapid burial. The biblical account of Noah’s Flood reveals how and when that burial occurred. 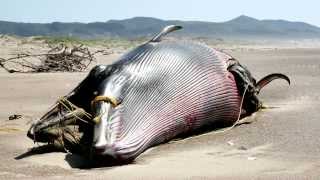