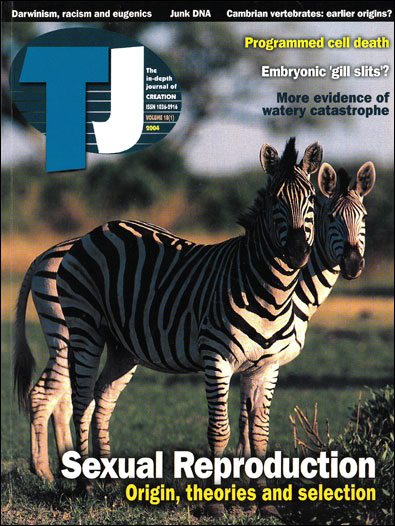 Bones are an amazing example of design, present in all vertebrates. They have a huge advantage over man-made girders, in that they are constantly rebuilding and redesigning themselves to cope with changing stress directions.1

This involves a fine balance of the activity of bone-depositing cells (osteoblasts) and bone resorbing cells (osteoclasts). It’s been recently shown that thyroid-stimulating hormone (TSH), best known for what its name says—stimulating the production of hormones in the thyroid gland—has an important role. It oversees both types of cells—without it, bones have osteoporosis in some parts (too little bone, so very weak), and are too dense in other patches.2

The very precise sequence of osteocalcin, as well as the metabolism to form the essential γ-carboxyglutamyl residues, seems to be yet another example of irreducible complexity, a hallmark of design.

Like all proteins, the instructions for OC are in the DNA,5 but there is more to its manufacture than simply decoding / translating the code and synthesizing the OC on a ribosome. Firstly, the transcription (DNA→mRNA) is regulated by 1,25-dihydroxy-Vitamin D3, one reason that Vitamin D is so important for healthy bones. It is then first decoded (translated) as a preproosteocalcin, which is 98 amino acids long. This comprises three parts: a 23-residue signal protein that is cleaved during translation,5 a 26-residue target propeptide, and the 49-residue mature protein.6

Even this does not complete the process; this requires another vitamin—K. Vitamin K1 or phylloquinone, best known for its vital role in the blood clotting cascade, is an essential co-factor in γ-carboxylation. That is, the specific glutamyl residues (Glu, from the amino acid glutamic acid) at positions 17, 21 and 24 have a second carboxyl group (–COOH) added to form γ-carboxyglutamyl residues (Gla). This changes the structure and stabilizes the α-helical portion of the protein.6

Even now, the OC protein is fairly shapeless. But when OC meets calcium ions, it folds to a special structure.8 The two carboxyl groups on the γ-carboxyglutamyl residues chelate1 to the Ca2+ ions, as shown by Fourier-Transform Infrared spectroscopy (FTIR).9 There was no spectral change when Ca2+ was added to decarboxylated OC (i.e. as it would be before converted by Vitamin K), showing that there is no binding without the carboxylation.9 Amazingly (for uniformitarians), enough osteocalcin to produce an immune reaction was found in bones of an Iguanodon ‘dated’ to 120 Ma,10 yet proteins could not last for millions of years. And the fact that it’s a bone protein shows it can’t be contamination from outside.

Now, pig OC’s crystal structure has been discovered, using a type of X-ray diffraction called the iterative single anomalous scattering method. This provides new insights into how finely designed it must be to work.7 The active site has a negatively charged region that binds the positively charged Ca2+ ions. Five Ca2+ ions are coordinated by three special Gla residues and an Asp at position 30. But not in just any old way—five calcium ions are bound in the same arrangement as in the exposed face of a HA crystal, parallel to the c axis. So the OC can dock on the HA and add the calcium, and thus grow the crystal, making the bone grow in the area needed.

To do this, OC’s building blocks, the amino acids, must be in a very precise sequence. For example, there is a tightly packed core involving the hydrophobic residues Leu 16, Leu 32, Phe 38, Ala 41, Tyr 42, Phe 45 and Tyr 46. There is also hydrogen bonding to stabilize the connection between different α-helices, Asn 26 in the helix α1–α2 linker and Tyr 46 in α3. The helices α1 and α2 form a V-shaped arrangement stabilized by a disulphide bridge between Cys 23 and Cys 29.

Thus the very precise sequence of OC, as well as the metabolism to form the essential γ-carboxyglutamyl residues, seems to be yet another example of irreducible complexity, a hallmark of design.11 This means this is yet another component that must be exactly right for the alleged transition from invertebrate to vertebrate. So it is not surprising that evolutionists have no fossil evidence for how the transition occurred—this protein alone shows it could never have happened.12